Peer into the minds of murderers in this fascinating true crime read.

Those were the frighteningly ordinary words of Ted Bundy, the American serial killer, kidnapper, and rapist who confessed to murdering 30 people—though he may have claimed additional lives.

Bundy and his crimes are the focus of a wide variety of movies and documentaries, from the Netflix true crime special Conversations with a Killer: The Ted Bundy Tapes to the Extremely Wicked, Shockingly Evil and Vile biopic starring Zac Efron and Lily Collins. In January 2020, Amazon launched Ted Bundy: Falling for a Killer. The true crime docuseries combines present-day interviews with archival footage to produce a bold new perspective on one of the most well-known serial killers in American history—by focusing on the women impacted by Ted Bundy’s heinous crimes. Among the individuals present in the documentary are Elizabeth Kendall, who dated Ted Bundy, Karen Sparks, a survivor and one of Bundy’s earliest confirmed victims, and Seattle Detective Kathleen McChesney.

Ted Bundy sits on a long, grim list of murderers whose names are known the world over: John Wayne Gacy, Jeffrey Dahmer, Ed Kemper, and Ed Gein to name but a few. The cases of these killers have inspired everything from bestselling true crime books to horror movie villains. But what fuels the allure? Is it morbid curiosity—or something much more?

In Why We Love Serial Killers, leading criminology professor Dr. Scott Bonn examines our fascination with true crime in all its permutations. Drawing on years of research in the field, Dr. Bonn dissects the criminal profiling techniques that bring killers to justice and the many ways in which the most ruthless among us transform into macabre pop culture figures, feeding our fascination as well as our fears. The result is an absorbing exploration of a serial killer's mind and “an excellent source of myth-busting information for laymen and professionals alike.” (Burl Barer, Edgar Award–winning author).

In the excerpt below, Dr. Bonn scrutinizes the false narrative of the unhinged psychopathic killer. In reality, many serial murderers appeared utterly normal to many in the outside world. Case in point? Ted Bundy himself.

Read on for an excerpt of Why We Love Serial Killers, and then download the book. 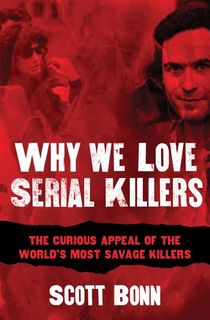 The entertainment industry has provided many inaccurate examples of psychopathic killers in film, television, and books. Psychopaths are often incorrectly presented in the media as scary people who look frightening and easily stand out in a crowd. They are frequently presented in the media as ghoulish monsters. In reality, a psychopath, including a psychopathic serial killer like Ted Bundy, can be anyone—a neighbor, co-worker, lover, or homeless person on the street. Any one of these seemingly harmless people may in reality be a violent psychopath who preys on others. Psychopaths rarely stand out in a crowd and that is what can make them particularly dangerous criminals and very difficult to apprehend.

Many of the most infamous and prolific serial killers in U.S. history, including John Wayne Gacy, Dennis Rader, Ed Kemper, Joel Rifkin, Jeffrey Dahmer, and Gary Ridgway, have exhibited the key traits of psychopathy and many of them have been diagnosed as psychopaths by forensic psychologists following their capture. A cool and unemotional demeanor combined with keen intellect and charming personality makes the psychopath a very effective predator. A lack of interpersonal empathy and an inability to feel pity or remorse characterize psychopathic serial killers. They do not value human life and they do not care about the consequences of their crimes. They are callous, indifferent, and extremely brutal in their interactions with victims. This is particularly evident in so-called power/control serial killers who will kidnap, torture, rape, and murder their prey without any outward signs of remorse.

Want more serial killer books? Sign up for The Lineup’s newsletter, and get our recommended reads delivered straight to your inbox.

A lack of interpersonal empathy and disregard for the suffering of their victims are key characteristics of psychopathic serial killers. They generally do not feel anger toward their victims. Instead, they are more likely to feel cool indifference toward them. Many serial killers seem to go into a trance when they are stalking and killing their victims. The violence they commit often has a dissociative effect on them emotionally. As explained by Dr. J. Reid Meloy, author of The Psychopathic Mind: Origins, Dynamics, and Treatment, psychopathic serial killers are emotionally disconnected from their actions and, therefore, are indifferent to the suffering of their victims. Their ability to dissociate themselves emotionally from their actions and their denial of responsibility effectively neutralizes any guilt or remorse that a normal person would feel in similar circumstances.

Psychopathic serial killers often view their victims as symbolic objects, according to Dr. Meloy. Ted Bundy described his victims in non-human terms and he referred to himself in the third person. Bundy said, for example:

Since this girl in front of him [Bundy] represented not a person, but again the image, or something desirable, the last thing we would expect him to want to do would be to personalize this person . . . Chattering and flattering and entertaining, as if seen through a motion picture screen.

Bundy went on to explain how he viewed women more as a category or group rather than as unique individuals. In essence, he dehumanized them and turned them into a homogeneous commodity in his mind. Bundy further said:

They wouldn’t be stereotypes necessarily. But they would be reasonable facsimiles to women as a class—a class not of women per se but a class that has almost been created through the mythology of women and how they are used as objects.

When Bundy got to know something too personal about a particular victim, it ruined his illusion of her as an object. Therefore, he deliberately avoided that possibility. By maintaining an image of their victims as inanimate objects, Bundy and other psychopathic serial killers are able to avoid any emotional bond to them or feelings of pity or remorse for what they do to them.

Ted Bundy was born in 1946. His earliest confirmed victim from 1974 was University of Washington student Karen Sparks, who survived her brutal attack on January 4th in Seattle. On February 1st, Bundy murdered UW undergrad Lynda Ann Healy. Bundy confessed to 30 killings, though he is suspected of more. The charisma Bundy used to gain his victims' trust before brutally assaulting and murdering them has made him one of the most scrutinized serial killers of all time. Bundy was first captured in 1975 for his crimes. He escaped twice in 1977. The first escape occurred in early June; he was re-captured approximately a week later. His second escape occurred in late December 1977, whereupon he remained at large for many weeks. During this time, he claimed additional victims before his final apprehension in February 1978. He received three death sentences and was executed by electric chair in 1989 at Florida State Prison. Criminology professor Dr. Scott Bonn dissects the notorious Bundy case and our insatiable appetite for true crime in Why We Love Serial Killers.