Mind of a Monster: Gary Ridgway, the Green River Killer Who Murdered At Least 49 People

This serial killer was convicted of 49 murders, though he confessed to at least 71.

It's chilling to think that Gary Ridgway, one of America's most prolific serial killers, not only evaded capture for years but was actually a suspect in the slayings before being cleared by police. It's perhaps even more chilling to remember that another notorious murderer—Ted Bundy—actually assisted the police in their hunt for the so-called Green River Killer by providing a psychological profile of the suspect.

Sometimes, it takes one to know one...

During the summer of 1982, dead bodies began showing up along the Green River, a 65-mile stretch of water located in the state of Washington. There was a clear pattern among the female victims: most of them were sex workers. While authorities didn’t have trouble connecting the victims to the same investigation, they struggled to find the killer.

In 2001, the police finally nabbed their man. 52-year-old truck painter, Gary Ridgway was arrested thanks to DNA evidence police had acquired from him years earlier. Ridgway was previously arrested on prostitution-related charges in 1982 and 2001, even becoming a suspect in the Green River killings in 1983 before “passing” a polygraph test in 1984. Upon a subsequent review by the FBI, it was determined that Ridgway failed this test.

The mystery of the Green River Killer baffled police, with special task force members even interviewing serial killer Ted Bundy—who offered his opinion on the psychology of the killer and his motives that drove him to kill. Journalists Carlton Smith and Tomas Guillen covered the story for the Seattle Times from the very beginning and received a Pulitzer Prize nomination for their investigative efforts.

In February 2020, Tomas Guillen lent his expertise on the Gary Ridgway case to ID Discovery's The Green River Killer: Mind of a Monster. The two-hour special examines the dark psyche of one of America’s most prolific serial killers. For an unparalleled deep-dive into the Gary Ridgway case, check out Smith and Guillen's New York Times bestselling true crime book, The Search for the Green River Killer. Their gripping read delivers the definitive account of the Pacific Northwest killing spree that held a nation spellbound—and continues to terrify us to this day.

Read on for an excerpt of The Search for the Green River Killer, and then download the book. 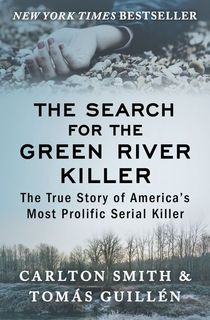 By Sunday the rain had stopped, and the sun was out. The Green River continued to run low. Robert Ainsworth loaded his inflatable rubber raft into the back of his pickup truck and headed for the river for an afternoon of relaxed drifting.

Usually Ainsworth liked to go rafting with his wife Maureen and son Jeff. The family had long enjoyed rafting down the Green as a hobby. But on this day Maureen wanted to visit her mother, and at the last minute Jeff decided to go to Tacoma. So Ainsworth went rafting by himself.

Ainsworth drove his truck down to the Green River and stopped at a bridge near the West Valley Highway, a road that bisected the valley south of Seattle. He put his raft in the water and began slowly floating downstream, keeping his eye on the bottom, which was clearer than usual because of the low water and the sunshine.

At forty-one, Ainsworth had worked for a dozen years as a meat inspector for a Seattle area meat wholesale company. He also had a bad ulcer. Going to the river and floating downstream, Ainsworth found, was as calming as it sometimes could be lucrative. With his large rubber raft and a special hook he had made for grasping old bottles, Ainsworth liked to make a day of floating down the river, all the way to the southern outskirts of the city of Seattle.

As he drifted, Ainsworth searched for the old relics on the riverbottom. The Green River, Ainsworth knew, had been used as a barge route to farms upstream in the valley in earlier years. Now pioneer throwaways could still be found 100 years later when the water ran shallow and the currents revealed new layers of sediment. Old whiskey bottles, bottles of patent medicine, Mason jars, plates, utensils, farm implements, crockery, just about every nonperishable article that people could throw away could be found on the riverbottom, by those who looked closely. And some of that old-time trash was worth money to modern-day collectors. Ainsworth himself had a valuable collection of old bottles, jars, and other scroungings from the riverbed.

Just past the place where Ainsworth put his raft in, the river made a broad turn to the south. A half mile later, it doubled back on itself to head north once more, forming a giant horseshoe. From Ainsworth’s vantage point, the channel seemed like a deep green canyon, with steep banks covered with blackberry bushes, yellow-flowered wild tansy, and tall grass. Rocks and logs stuck out of the mud and sandbars piled up on the riverbottom. Occasionally Ainsworth drifted over deeper, darker holes where fish rested quietly before continuing upriver to spawn.

Once in a while Ainsworth saw something on the bottom that attracted his interest. Lowering himself over the side, Ainsworth waded to the spot for a closer look. If the object seemed worth something, Ainsworth tried to snag it with his hooked pole. That morning, Ainsworth found a four-foot fragment of a waterlogged singletree, the wooden tongue used by the pioneers to harness horses to farm wagons. Ainsworth pried the ancient wood up from the muck and dumped it in his raft, then resumed his journey, keeping to the shallower water at the sides of the channel.

Shortly before noon, having drifted around the top of the horseshoe and heading north once again, Ainsworth could see the looming bulk of the PD&J Meat Company slaughterhouse, silent because it was Sunday.

Just after the turn, Ainsworth saw a man standing by the water’s edge. There was a narrow trail beaten down through the grass from the roadway above. On top of the bank, Ainsworth was aware of another man behind the wheel of an old pickup truck. Ainsworth stopped his raft and waded over to the bank. The man at the edge of the water seemed to be in his late forties, tall, well-muscled, and balding. Ainsworth assumed that the man had been fishing. “Catch anything?” Ainsworth asked. The man shook his head. “Found anything?” the man asked Ainsworth.

“Just this old singletree,” Ainsworth replied, pointing to the waterlogged wood. The man nodded and said, “You know, there’s an old motor right down there, a car motor, in the river under the water.” The man pointed to the near side of the river. Ainsworth turned around to look. “Yeah,” he said. “I can see it right now.”

Then the man in the truck—he seemed younger, to Ainsworth—shouted something, and the balding man went back up the trail and got into the truck. The truck drove off.

Ainsworth climbed back into his raft and floated downstream for another minute or so as the sounds of the truck faded. He looked down into the water again and saw a black woman floating face up under the water. Ainsworth was struck by the woman’s hair, which bobbed gently along with the current under the water. Her eyes stared back at him without blinking. She seemed very small, almost a child. Ainsworth’s mind told him he was seeing a mannequin which had been thrown into the river. He got out his bottle pole and tried to hook the figure. One of the legs was stuck under a submerged rock. The raft turned underneath him as Ainsworth reached out. It bumped into something. Ainsworth looked over his shoulder and saw another mannequin almost under the raft. Ainsworth suddenly realized the figures weren’t mannequins at all. The awareness struck him with an electric jolt that made his ulcer scream: These were dead people.

Related: 33 Books About the World’s Most Famous Serial Killers

Shaking, Ainsworth pulled his raft over to the bank and got out of the water. The tall grass formed a canopy over his head. Picking his way through the shallows, Ainsworth worked his way back upstream to the place where the man had been standing by the trail. Ainsworth went up to the road. The truck had disappeared. He sat down, unsure of what to do next. He waited for someone to come by. After about half an hour, a man and two children came by on bicycles. Ainsworth hailed them and told them about the bodies. The children wanted to go down to the river and look, but wisely, the man stopped them. Ainsworth asked him to call the police. The man said he would do it, and then he and the children pedaled off. Ainsworth sat down once more to wait.

Another half hour passed. Ainsworth’s ulcer was starting to gnaw at him. He began feeling very sick. Finally, a policeman drove up. Ainsworth led the cop down the bank to the two bodies. Ainsworth told him that at first he had thought the bodies were mannequins. The cop stepped into the water to feel one of the bodies. It seemed to Ainsworth that the cop thought they might be mannequins too. Then Ainsworth and the cop climbed back up to the roadway where the cop called in on his radio. They sat down to wait for reinforcements. Ainsworth felt like he was going to throw up.