Enter the basement of America's Killer Clown, one of the most notorious serial killers in history.

On the surface, John Wayne Gacy Jr. appeared to be a great man. He was a successful businessman, a devoted father, a loving husband, and the friendly clown of Illinois’ Norwood Park community. But behind the mask of normalcy and circus makeup lay a monster awaiting his next victim. Gacy targeted young men—preferably underage—whom he would rape, torture, and murder in his home. It was a routine he'd begun in 1972, and would not give up for six years.

Born in 1942, Gacy had a troubled childhood. He was regularly beaten and belittled by his alcoholic father. As a young boy, he was molested by a family friend, an incident he kept secret for years for fear that he would be blamed for the abuse and subjected to further beatings by his father. His school years were friendless, thanks in part to his inability to play sports due to a heart condition. Gacy's youth was marked by long stays in the hospital for a separate, undiagnosed condition that caused him to experience seizures and blackouts.

Related: These True Creepy Clown Stories Will Make You Want to Hide Forever

In 1964, Gacy got married. Five years later, that marriage dissolved when he was sent to prison for sexually abusing a teenage boy. His wife filed for divorce and he never saw her or their two children ever again. Considered a model prisoner, Gacy was paroled after serving 18 months of his 10-year prison sentence. While incarcerated, he had been diagnosed with an antisocial personality disorder, which limited his ability to empathize or consider the impact his actions had on other people. Now free to roam the streets again, Gacy’s sexual deviancy raged unchecked and he continued assaulting youths.

Gacy was admired by members of the community, who were blissfully unaware of his crimes. Among other community service and acts of charity, Gacy volunteered to dress as a clown to entertain at local children’s parties. No one knew that the friendly clown who devoted his spare time to making children laugh had another hobby: committing shockingly brutal murders.

Gacy remarried in 1972, the same year that he descending into killing teenage boys and young men. This marriage was strained and later crumbled completely, due in part to Gacy’s refusal to have sex with his wife. Meanwhile, without his wife’s knowledge, Gacy lured several youths to their home, coercing or outright forcing them into sexual acts.

Related: Married to a Murderer: 5 People Who Unknowingly Married a Killer

Gacy’s first murder victim was a 16-year-old by the name of Timothy McCoy, a hitchhiker whom he offered a ride and a place to sleep. The next morning, Gacy claims to have awoken to Timothy standing over him with a knife. According to Gacy, he leapt from his bed and Timothy raised his arms in a gesture of surrender, which Gacy took as an act of aggression. The knife in Timothy's hands slashed through Gacy's arm, and Gacy pounced on Timothy and stabbed him multiple times. It was only after killing the teen that Gacy realized Timothy had been setting the table for breakfast, and happened to wander into Gacy's room holding the knife as Gacy awoke. Gacy buried Timothy's body in his cellar, and noted how the experience made him realize that killing “was the ultimate thrill.”

By the end of his horrific spree, Gacy had killed 33 boys. Many were buried on his property—with the majority hidden in a crawl space—while some of the bodies had been dumped elsewhere. Chillingly, Gacy had to resort to disposing of bodies in the Des Plaines River once he had completely filled up his crawl space with victims.

It was the 1978 disappearance of Robert Piest that finally led authorities to Gacy’s modest suburban home outside of Chicago. It was there, in Gacy’s foul-smelling basement, that police unearthed one of the most disturbing murder cases in American history. Tim Cahill details how police finally caught the Killer Clown in his true crime book, Buried Dreams.

Read on for an excerpt from Buried Dreams, and then download the book. 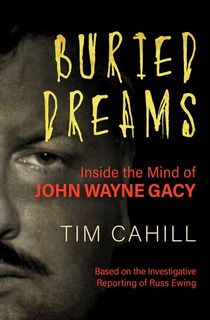 Rob Piest was an A student, a standout gymnast, an ambitious, intelligent boy who was very close to his family—not at all the sort of kid who runs away from home. Certainly not at 9:00 in the evening, after putting in four hours on his part-time job; certainly not on the night of his mother’s 46th-birthday party, a party that had been postponed until Rob finished work. The boy was last seen on his way to talk to a contractor about a summer job. The contractor’s name was John Gacy. That night, Rob Piest simply disappeared.

Suburban Des Plaines police, investigating the case, put a tracer on John Wayne Gacy, Jr., and found that he had been convicted of sodomy, in Iowa, 10 years previous. That offense had involved a 15-year-old boy.

Ten days later, after an intensive investigation, John Gacy was arrested. He insisted that he knew nothing about the Piest boy’s disappearance. The interrogation was cut short when the suspect complained of severe chest pains and said that he had a history of heart trouble. Officers rushed Gacy to Holy Family Hospital in Des Plaines.

Meanwhile, a search warrant was obtained for Gacy’s house. Officers and evidence technicians—representatives of the Des Plaines police department, the Cook County sheriffs police, and the state’s attorney’s detail—began arriving at the brick ranch house about seven that night. They were looking for evidence of a kidnapping; they feared they might find evidence of a murder.

Want more true crime books? Sign up for The Lineup’s newsletter, and get the best book recommendations delivered straight to your inbox.

Toward the front of the house, in a living-room closet, police found a trapdoor leading down into a dark, dirt-floored crawl space, which seemed to be flooded. The beam of a floodlight pointed into the open hatchway was reflected on the surface of the dank water that stood a foot deep below. Cook County evidence technician Daniel Genty saw a cord just under the hatchway door; he plugged the cord into a nearby socket. There was a rumble of machinery, and a sump pump, somewhere in the murky depths, began pumping water out of the darkness. A dank, putrid smell emanated from the crawl space: the smell of sewage and something worse, something officers recognized as the odor of a morgue.

It took about 15 minutes for the crawl space to drain, and in that time, evidence technicians searching the garage and workshed found a number of wallets containing IDs belonging to several young men, as well as some items of personal jewelry a teenage boy might wear. It didn’t seem possible that all these boys had just happened to leave their clothes, their jewelry, and their wallets at John Gacy’s house.

Daniel Genty now had an idea of what he might find in the crawl space. When the water had been flushed away, Genty dropped through the hatchway, into the mud. There was no ladder: the crawl space was only about two and a half feet deep. Genty dragged a small shovel and fire department floodlight with him. He crawled, on his hands and knees, toward the south wall, dropping to his belly to get under the center-support beam that ran the length of the house. In the southeast corner of the house, up against the foundation, Genty could see two long depressions, parallel to the wall. They were about six feet long and a foot and a half wide: the size of graves.

Genty crawled to the northwest corner of the crawl space, then moved to the southwest, where he noted three small puddles, about the size of ashtrays. One of the puddles was a dark, murky, purple color. The other two were filled with hundreds of thin red worms, about two inches long, and when Genty shone the floodlight on them, they burrowed into the soft mud.

It was there, in the southwest corner of the crawl space, that Genty decided to make his first excavation. He knelt, nearly doubled over, and plunged his trenching tool into the mud. An unbearably putrid odor burst up out of the earth and filled the crawl space. The second shovelful of earth contained a clot of adipocere: white, soapy, rotting flesh, almost like lard. A product of decomposition, adipocere takes twelve months or more to form. The body could not be Rob Piest’s.
Gacy, it seemed, could possibly be guilty of more than one murder. Genty took one last scoop of mud, hit something hard, and pried up what looked like a human arm bone. Skeletal remains: definitely not the body of a boy last seen alive eleven days ago.

Another evidence technician and an investigator dropped into the crawl space.

The odor, in that damp and confined area, was almost as unbearable as the thought of what the crawl space contained. “I think this place is full of kids,” Genty said.

In the northeast corner of the crawl space under John Gacy’s house, the officers found more puddles, all swarming with thin red worms. There, two feet from the north wall, they uncovered what appeared to be a knee bone. The flesh was so desiccated that at first they thought it was blue-jean material.

South of that dig, Genty uncovered some human hair in the soil. The second evidence technician dug along the south wall and found two long bones, human leg bones, both very blackened. Rather than disturb any more remains that might complicate identification procedures or destroy evidence, the officers decided to quit the crawl space and call the coroner.

At about the same time, John Gacy was being released from Holy Family Hospital. He had been thoroughly examined, and doctors could find no evidence of a heart attack. Gacy’s pulse was a little high, that was all. Under heavy guard—detectives had been told what the search uncovered—Gacy was returned to the Des Plaines police station, where he was arrested and charged with murder.

“My house,” Gacy said. “Did you go into the crawl space?”

“What was it for, John?” Albrecht asked.

“For the sewage, the dampness … for … what you found there.”

A mug shot, taken at the time, shows a stuporous, uncomprehending man. Gacy’s puffy face and undistinguished features look slack, as if the bones of his skull have no substance to them. He stares into the camera, and his eyes are glassy, dull, and dead. He looks like a man insane.

Want more true crime books? Sign up for The Lineup’s newsletter, and get the best book recommendations delivered straight to your inbox.

If you’re wondering what became of John Wayne Gacy Jr., he remained on death row for over a decade after his arrest. During that time, his odd fixation with clowns persisted, and he expressed himself through art. Gacy created paintings of clowns, some of which were self-portraits. In 1994, Gacy was executed by lethal injection. His psychopathy rendered him incapable of true remorse for his crimes. His final words were “Kiss my ass.”

All photos via Murderpedia