Spending the night at the Lizzie Borden House sounds like a thrill, right? Think again.

You’re probably familiar with the story of Lizzie Borden, the spinster who (as speculation goes) took an axe to her father and stepmother in 1892 and was subsequently acquitted for their murders.

What you may not be familiar with is the fact that the understatedly beautiful home in Fall River, Massachusetts where this all took place is now a bed and breakfast. For a reasonable price, you can spend the night in the actual room where someone (*cough* Lizzie Borden *cough cough*) brutally murdered Abby Borden by hitting her in the back of the head with the blade of an axe 19 times. Sound like an exciting thing to do? Believe me, I thought so too … before I tried to make it through a full night in that room, and failed.

There are only two rooms in the Lizzie Borden B&B where actual murders took place, the front parlor room, where Lizzie’s dad Andrew Borden was hacked to death while he slept on the couch, and the room now called the John V. Morse room, where Lizzie’s stepmom was killed. In the early Spring of 2012, I made a reservation to stay in this room with little idea as to what I was actually getting myself into. It’s one thing to hear stories of a murder taking place, and of that place being intensely haunted, and quite a different story to try sleeping in a bed right next to where a woman was killed and died on the floor. To drive this matter home for their guests, the owners of the B&B hung a crime scene photo on the wall over where Mrs. Borden’s dead body was discovered. Which, again, is next to the bed where you may (or, in my case, not) be sleeping. 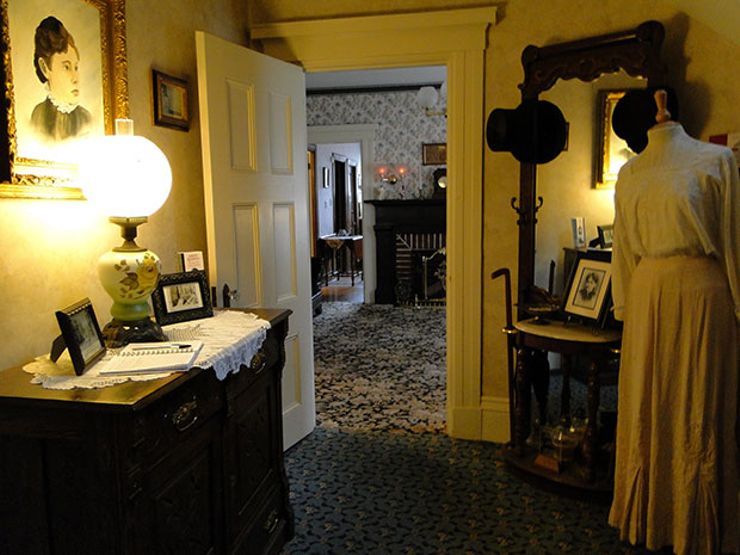 When I arrived at the B&B, after putting my suitcase in the John V. Morse room and taking a quick look around, I was given a tour of the home along with the handful of people who would also be attempting to stay there that night. The tour guide, a retired paramedic and fireman with a heavy Boston accent, told us that almost everyone who stays there experiences ghost activity, and that although he’s seen a lot of horrific things in his past career, he’d rather sleep in a burning building than sleep in that house.

Of the many ghost stories he told the most memorable included the fact that Mrs. Borden likes to rip the covers off of people while they sleep, that objects in the home get moved from room to room by unseen forces, and that prior to the family moving in to the home the previous tenant, a distant relative named Eliza Darling Borden, killed two of her three children by dropping them down a well at the back of the property, and then took her own life. Visitors of the B&B often claim to hear the ghosts of these children playing and laughing on the top floor of the house. The many ghost hunters who have visited over the years go to great lengths to capture these ghost children on video, and some have claimed to, like in the following clip.

Once settled into the John V. Morse room at around 11:00 P.M. I almost immediately began to feel a sense of gloomy unease wash over me. The whole house, especially that room, is dank with an air of foreboding that makes it feel like you’re walking through a thick, dark fog. There’s no TV in the room so I occupied myself by looking around at all of the antique furniture (some original), and texting friends about how scared I was.

Related: 5 Haunted Horror Houses That Will Send Shivers Down Your Spine

After awhile I had no choice but to attempt to go to sleep, but my fear kept waking me up. The longer I stayed the more I felt like the night was ramping up to something. My fear was that if I remained any longer I would definitely experience heavy paranormal activity, and ultimately concluded that I wasn’t mentally or physically prepared for that to happen, so I fled in the middle of the night to stay at a friend’s house—returning to the B&B in the morning for their complimentary breakfast because, hey, I paid good money for this.

I’ll definitely be going back at some point as I’d really like to force myself to make it through the night. What do you think? Could you do it? If so, tell Mrs. Borden I said hi and that even though she didn’t get me in 2012, I’ll be back to give her another chance soon.

THIS STORY WAS FIRST PUBLISHED ON The Hauntist.

Five of the Most Haunted Towns in the USA

15 Churches Haunted by Not So Holy Spirits

Want more ghost stories? Sign up for The Lineup’s newsletter, and get our eeriest tales delivered straight to your inbox.