5 Haunted Horror Houses That Will Send Shivers Down Your Spine

Take a tour of some of the most haunting homes in America.

All houses have history. Whether you built it with your bare hands or inherited it through generations, a house tells a story. Most hold stories of love, family, and sometimes hardship. Others tell a much more sinister tale. Some believe that houses hold the memories of those who have lived in them. If this is true, the following houses will contain some dark memories indeed. 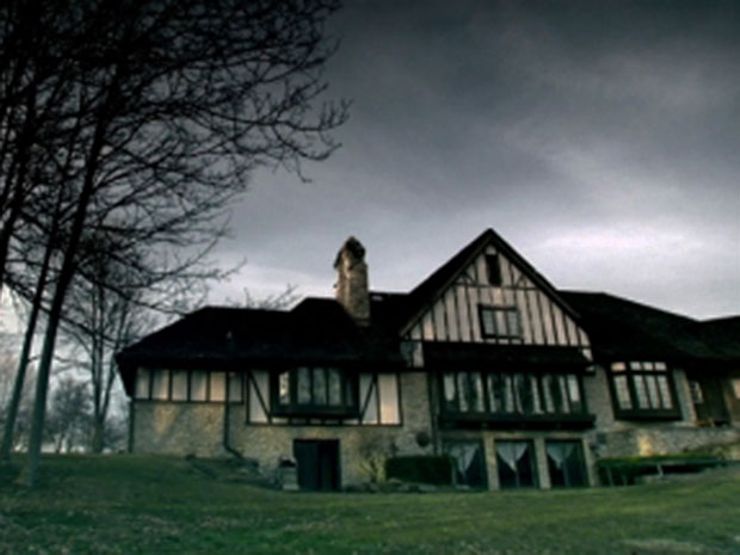 Photo via Real Evidence of the Paranormal

Herb Baumeister made a small fortune for himself as owner of a chain of thrift stores. He settled down with his family on his newly purchased 18-acre property in Westfield, Indiana. He named the land Fox Farm. Oh yeah, I almost forgot: Herb Baumeister was a certified serial killer. He would pick up men at gay clubs and lure them to his home where he would kill and dismember them. When police searched the estate, they found the remains of 11 men. Herb killed himself as police were closing in, but he was linked to many other unsolved murders. It remains unclear how many lives Herb Baumeister ended. When his wife left Fox Hollow Farm it became vacant, tainted by a grisly past. After some time, Rob and Vicki Graves purchased the property and claimed they were plagued by visions of Baumeister’s dismembered victims. One guest who stayed in an apartment on the farm was reportedly visited by Herb himself. 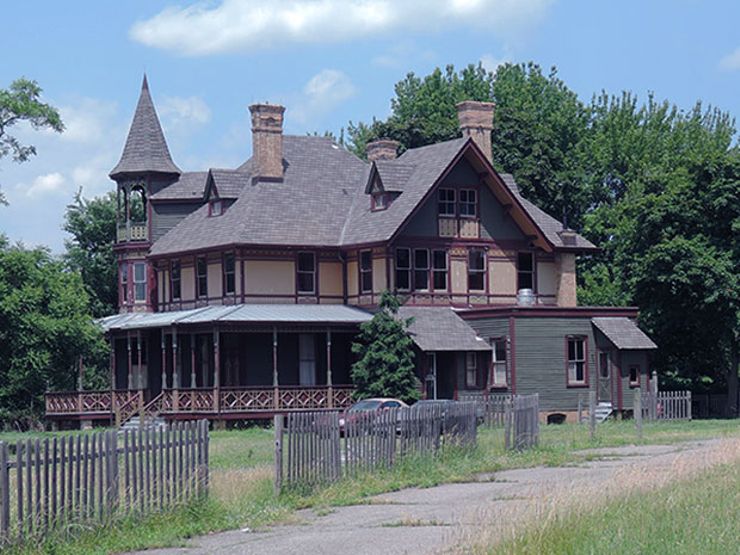 Edward Kreischer’s father built a mansion for his son in Staten Island, New York in the late 1800s. When the family business seemed to be a complete failure, Edward took his own life in his home. Although the ghosts of Edward and his wife are said to have stuck around, a more grisly event took place at the mansion in 2005. Joseph Young was working as the caretaker to the property, but was also involved with the Bonnano crime family. They ordered a hit on Robert McKelvey, and Young was elected to execute it. Things went a bit wrong, and Young ended up stabbing McKelvey and drowning him in the pool. He then chopped up the body and burned it in the furnace. Young was sentenced to life in prison, but the ghosts of the Kreischer mansion remain to this day. If you’re on the market for a new place, the Kreischer Mansion is currently listed at about $1.5 million. Make sure you get a new furnace, though. 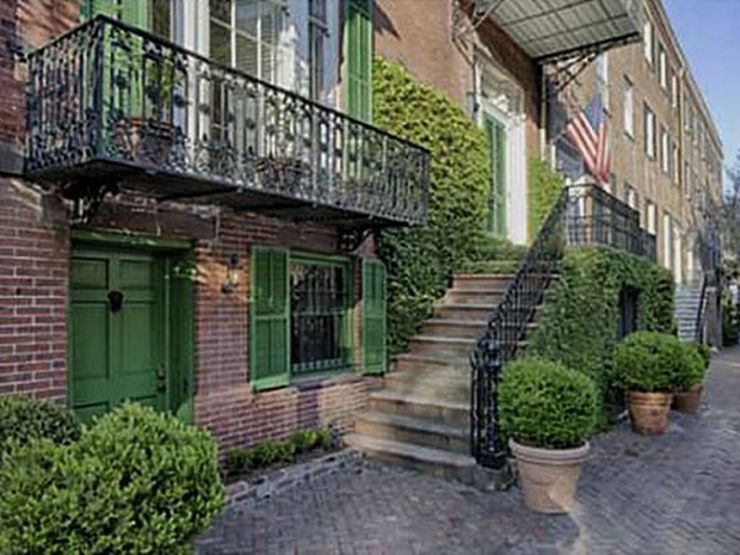 As a child, Pulitzer Prize winner Conrad Aiken and his family moved from New England to Savannah, Georgia. His family was wealthy, but they had other problems; Conrad’s father was severely mentally ill. When Conrad was 11, he heard two bangs conclude an argument in his parents’ bedroom. When he went to investigate, he found them both dead. His father had killed Conrad’s mother and then killed himself. The current owner of the house has had paranormal investigators take a look at the property. They have reported floating orbs and strange voices, suggesting that the souls of the killed Aiken parents are still staying in their former home. 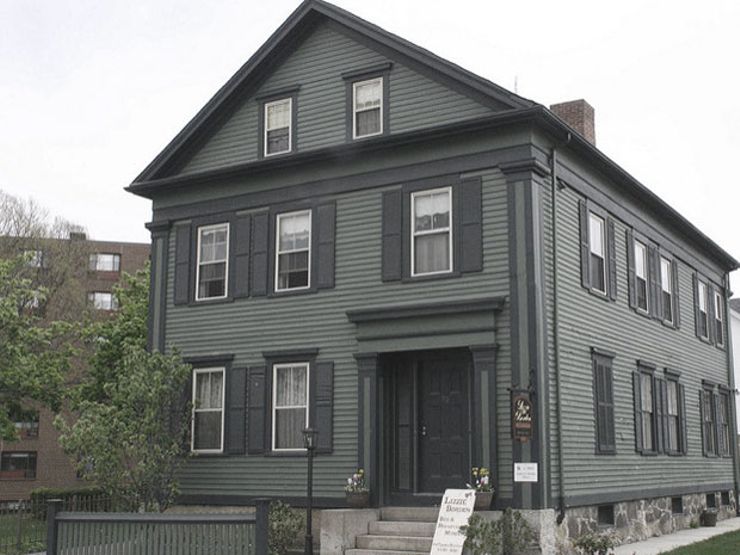 Lizzie Borden lived from 1860 to 1927 and is known as the prime suspect in the axe murder of her parents in their home in Fall River. Although she was acquitted of the slayings, Lizzie remains the prime suspect as no one else was ever charged. One day in 1892, Lizzie’s stepmother was bludgeoned to death with an axe in an upstairs room. Lizzie’s father was murdered in a similar manner in the downstairs parlor. After the trial, Lizzie returned to Fall River where she remained for rest of her life. Most people believe that Lizzie was the one who committed these murders, but the truth of the matter is lost in time. However, some say the Borden family and their maid are still in residence. There have been regular sightings of Mr. and Mrs. Borden throughout the house over the years, and some visitors have even claimed to have seen Lizzie herself in the basement. 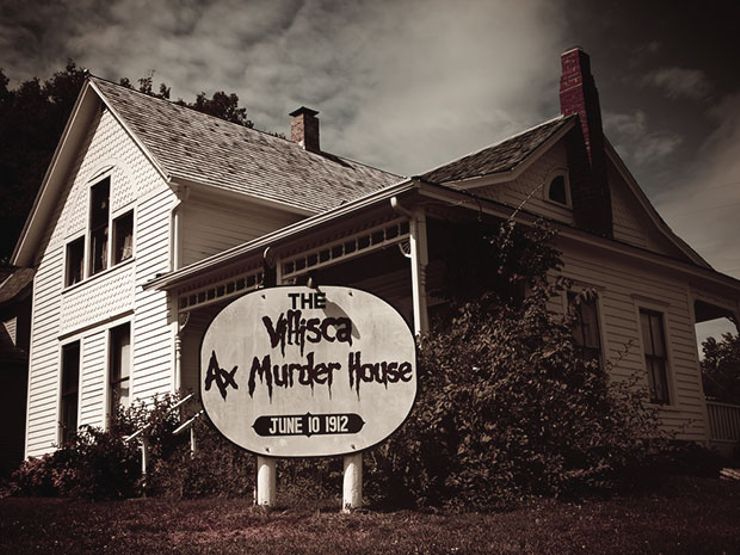 Possibly the most gruesome murder on this list took place in Villisca, Iowa one night in June of 1912. The six members of the Moore family who lived in the house, as well as two of their house guests were found beaten to death with an axe. Six of the victims were children. Although no one was ever convicted of these crimes, the investigation produced a litany of suspects, from vagabonds to known killers in the area. One suspect was Reverend George Kelly, who was tried twice for the murders. He was sending investigators disturbingly accurate accounts of the murders, and even confessed after hours of interrogation. He later recanted, and was acquitted in his second trial. This case remains unsolved.

Today the infamous house also enjoys a paranormal reputation for being haunted by its former residents. Children’s voices are often heard in the house, and objects miraculously fly across rooms as if thrown by unseen hands, leading the Villisca Axe Murder House to be named one of the most haunted houses in America.

Related: A Close Encounter with the Ghosts of the Villisca Murder House
This article was first published on The Occult Museum.
Read More:
Listen To These Horrifying EVP’s of Screams in The Villisca Axe Murder House
The House the Devil Built: America’s Most Haunted House
A Victorian Ghost Story: The Haunting of 50 Berkeley Square