A romantic relationship gone awry and troubles at home could explain why many still believe Lizzie Borden killed her parents.

Though she was acquitted, Lizzie Borden is famous for taking an axe and giving her stepmother 40 whacks. So what really happened on August 4, 1892 that made her snap?

Although the murder of Lizzie’s parents has largely remained a mystery, some Borden murder theorists speculate that Lizzie fought with Abby and Andrew over her relationship with a man named David Anthony, a possible out-of-wedlock pregnancy, or the simple fact that she was tired of living frugally under her wealthy father’s thumb.

Most likely, we will never know the whole story, but author Brandy Purdy has compellingly theorized just what might have happened on that fateful day. Blending fact, theory, and historical fiction, Purdy’s absorbing The Secrets of Lizzie Borden places readers into Lizzie’s mind, as well as fills in historically accurate, yet lesser-known details of the life of a woman who was always searching for more.

In the book, Purdy writes that Lizzie flirted with the idea of a relationship with David Anthony, although Abby was convinced he only wanted the Borden fortune. But when David pushed their physical relationship too far, Lizzie began to blame herself–as well as the woman who implied that Lizzie wouldn’t be able to find someone who loved her, regardless of wealth. When Abby found out about the unlawful union, Lizzie knew her stepmother must be silenced before her fate as an unwilling wife and mother was permanently sealed.

“Anything’s possible,” Purdy states. “I think there’s a tendency to look for a single major event as the catalyst for the Borden murders, but my personal opinion is that it was just one more frustrating, upsetting thing layered on top of so many others that was the straw that broke the camel’s back and made Lizzie snap that day.”

Read on for an excerpt from The Secrets of Lizzie Borden, and then download the book. 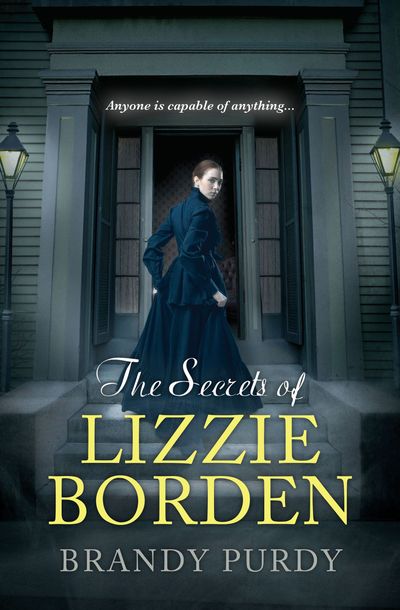 I had to get out. I was suffocating. I couldn’t breathe in that house! I felt the walls closing in on me. I needed air; I needed to think, to clear my head. Hazy red stars danced maddeningly before my eyes and I felt so hot I thought surely I was going to die if I didn’t get out. As I rushed through the kitchen I shoved my shameful bundle into the fire. Let it burn! Devil take the damning evidence against me straight to Hell! I didn’t want to see it, touch it, or think about it! I just wanted it to disappear! Abby could tell Father whatever she liked, but at least now he couldn’t see the evidence with his own eyes. I ran outside, gasping frantically for air, gulping it in hungrily by the mouthful, but I couldn’t stand the open space of the backyard either. Suddenly I felt so exposed and vulnerable, like a woman about to face a firing squad.

I darted desperately into the barn, seeking some sort of haven there, though I knew it would be hotter than an oven inside, and dreadfully dusty, and I hated it now for all the memories it held of David. As I slumped light-headed against the wall, willing myself not to faint, to stay alert and think—Think, Lizzie, think! Find a way to save yourself!—a silver gilt glimmer caught the corner of my eye.

The hatchet! It was practically new. It had been used only once as far as I knew, when Father had killed my pigeons. I took it up. I felt its weight in my hands. In a peculiar, perplexing way I can’t truly explain, it was almost comforting. It gave the illusion of power back to me; it made me feel that I was in control of my own destiny, that it was my own sense of powerlessness that was truly the illusion. The power was in my hands, not theirs; no one else had mastery over me unless I was meek and allowed it!

Gripping the handle tight, holding on for dear life, I walked slowly back to the house, with the hatchet’s glistening blade hidden in the folds of my skirt. When I glanced down and saw it nestled against the part that was stained with paint it occurred to me then that the reddish-brown color looked just like dried blood.

I went upstairs to my room. I laid the hatchet down reverently upon my bed. I stood and stared at it with heavy, drowsy suddenly very sleepy eyes, swaying like a woman mesmerized. As the sunlight pouring in through the open window played over the silver gilt like sunshine reflecting upon a river, I thought of water and baptism, of being cleansed of my sins, renewed, reborn. I began to take off my clothes. I just wanted to lie down and go to sleep and never wake up, and if God was truly merciful, I thought, that was what would happen. He would gather me to His bosom instead of foisting me into David Anthony’s arms.

Through the thin wall I heard Abby singing in the guest room. David’s visit had interrupted her before she had finished tidying it up for Uncle John. That was Abby’s way; I knew she was trying to distract herself and put all the unpleasantness out of her mind until Father came home.

My head felt unbearably heavy. I thought my neck would surely break beneath its weight, like a pile of bricks balanced upon a toothpick. My sight was shrouded by a rolling red mist and exploding stars, bright bursts of light popping against the red, making me fear that one of them would extinguish my sight forever and leave me stone-black blind. I wanted to lie down, I felt so sleepy and faint, heavy and light-headed all at the same time, but my feet were already moving with a mind and determination of their own and the hatchet was in my hands, hell-bent on securing my freedom. Now was not the time to waver or succumb to weakness like some swooning heroine in a romance novel waiting for the hero to save her. There was no “hero born of woman” to “crush the serpent with his heel” (the little voice in my head was still singing random snatches of “The Battle Hymn”: only it wasn’t one voice anymore. It was a whole chorus all singing different verses and snippets at the same discordant time so I could hardly think, only intuitively understand what they were telling me I had to do). There was only me . . .that song, and the hatchet, “the Great Emancipator.” “His truth is marching on. . . .”

Wearing only the bright red-flowered pink calico belt that held the cumbersome towel in place between my raw, red thighs, with the silver gilt of the hatchet’s head cold as ice against my hot, sweaty breasts, I approached the guest room door. I laid the hatchet down on my desk while I lifted and shifted the end that partially blocked the door just enough for me to open it. I vaguely remember my nipples puckering as I paused on the threshold and stared down at my feet as though I had never seen them before. I wiggled my toes, sweaty and pink, against the faded flowers of the ancient carpet.

I hefted the hatchet in my hand and shivered as it grazed my breasts. I closed my eyes and let myself dream I was the truehearted heroine whose hope sprang evergreen being caressed by her long-lost love, one of over a hundred souls presumed perished on an ill-fated Arctic expedition. I felt so weak, and then, as I stood upon the threshold of the guest room, I tingled with a surge of sudden strength, like a jolt of electricity, that made my spine snap erect.

Abby was still singing. “From this valley they say you are going/ Do not hasten to bid me adieu/Just remember …” She had her back to the door; she was bending over the bed, plumping a pillow she had just put in a fresh white slip and adjusting the coverlet. She never sensed that anything was wrong. The hairs never tingled warningly on the nape of her neck. No guardian angel tapped her shoulder to alert her that Death was sneaking up behind her.

“He has loosed the fateful lightning of His terrible, swift sword …” I raised the hatchet high, I felt its heaviness in my shoulders, and I brought it down HARD. It pulled and hurt me too as the blade bit deep with a terrible crunch into the back of her head. This hurts me just as much as it hurts you … I wanted to tell Abby, and maybe I did; I just don’t know if the whisper was only inside my own aching, pulsing, pounding head. I wish it didn’t have to be like this … Then I did it again. And again. Again and again and again and again …