Sit Down With John E. Douglas and The Killer Across the Table

The author of Mindhunter's latest book brings his most terrifying cases to new light.

SPECIAL NOTE: The Killer Across the Table will be one of two titles included in the June/July Creepy Crate.

John E. Douglas is one of the most iconic names in crime. An early criminal profiler, Douglas’s work with the FBI marked the first attempt to understand the habitual killer’s mind. Netflix’s smash 2017 show, Mindhunter, was based on Douglas’s memoir of the same name. Coming face-to-face with some of the United States’s most deranged killers and criminals, Douglas formulated the language, the procedures, and the very investigative structure that is vital to the pursuit of each killer.

So when we heard Douglas and his longtime collaborator Mark Olshaker would be digging into his historical case load for a brand-new book, we knew it would be a must-read for lovers of true crime. The Killer Across The Table puts four of Douglas’s most terrifying cases under the magnifying glass, many of which will be new even to true crime buffs. The book will be published on May 7, 2019 — but we've got an exclusive sneak peek today, just for readers of The Lineup.

In this excerpt, Douglas digs into one of the most deadly–and least understood–types of serial killers. These are the brutal killers who like to play God, taking advantage of the elderly and weak to decide who lives and who dies.

Read on for an excerpt from The Killer Across the Table, one of the books included in the June/July Creepy Crate, then pre-order the book here. 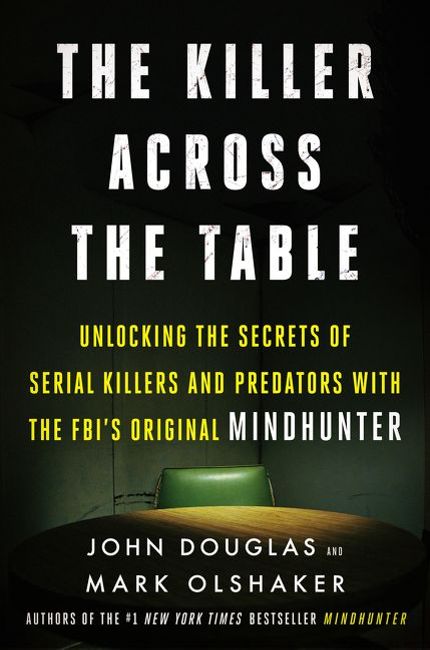 A lot of people are surprised to discover that the most successful and numerically devastating serial killers are not the Jack the Rippers, who stalk their victims by night, or even the Ted Bundys, who charm, entice, then abduct, assault, and kill beautiful young women. Actually, and ironically, they are workers in one of the most sacred helping professions, people who don’t even bother to hide their identities or their faces from unsuspecting victims or their families. And in many cases, it takes years before authorities even realize a crime has been committed, so the case is cold.

Donald Harvey, a mild-mannered man from Ohio, with a ready smile, a sunny disposition, and an endearing manner, may be the most prolific serial killer in American history. Between 1970 and 1987, he may have killed as many as eighty-seven people, all while hiding in plain sight. His preferential victims: elderly men and women in hospitals who could not resist or fight back. By the time he was captured and brought to justice, he had proudly embraced the moniker Angel of Death.

Want more true crime? Sign up for The Lineup's newsletter, and get our most chilling stories delivered straight to your inbox.

When Harvey was finally apprehended and interrogated, I was asked to observe the interrogation and provide on-site consultation as to how to get him to confess. As it turned out, though, Harvey spoke freely to the FBI agents questioning him. The interrogators were interested in his motivation so they could help put together a coherent case for trial. I was interested not just in his motivation but also in his actual behavior before, during, and after each crime. How and why did Harvey become the person he was? How did he learn to kill so efficiently, and what factors went into his going undetected for so long? Was he born with homicidal impulses or were they the result of a dysfunctional upbringing that demanded some form of displaced retaliation or retribution? What could have been done to stop him and what can now be done to keep crimes such as his from happening again? This was what I hoped to get out of the interview.

If Donald Harvey was a one-off type of predator, he would be interesting and grotesque, but not necessarily significant from an investigative perspective. Unfortunately, he is the prime propagator of a type of murder that has its own category in the Crime Classification Manual: Medical Murder.

Every serial killer is horrible and terrifying in his own unique way. But on a certain level, what Donald Harvey did was particularly despicable because he played on trust. Moreover, he perverted one of our most cherished values: the mission to heal and comfort the sick.

These may not be the types of criminals that thriller movies are made about. We may not think of the Donald Harveys as being dangerous in the same way we would a Ted Bundy, a Charles Manson, or a John Wayne Gacy. But that would be a mistake. Most of us, fortunately, will never encounter that type. But just because the Harveys don’t lurk in the shadows, waiting to pounce on unsuspecting victims going about their daily lives, doesn’t mean they are not as dangerous.

Their victims are often the same as the more traditional serial killers: the elderly and defenseless. We think of young, beautiful women as the targets of these men, but vulnerability, more than anything else, is likely to lead to someone’s becoming a victim. That’s why children, senior citizens, prostitutes, drug addicts, the homeless, and other marginalized groups are prime targets of serial killers.

Individually, as we’ve said, the Harvey kind of predator can be a lot more “productive” as serial killers. Almost all of us at some point will find ourselves in a health-care setting, either for ourselves or a family member.

For most of us, hospitals are pretty scary places to begin with. Even in the case of “routine” procedures, we can never be certain of the outcome. If we get to the point where we feel we can’t trust the man or woman behind the surgical mask or the nurse’s badge, then the hospital becomes the stuff of nightmares or horror movies.

When I think of times when I’ve been hospitalized, it never occurred to me that a cross word uttered in pain or frustration to a nurse could result in that person’s deciding to kill me. Or when I was comatose in Swedish Hospital in Seattle after suffering viral encephalitis while hunting the Green River Killer in December 1983, what if some nurse or orderly playing God decided to “put me out of my misery”? Anyone could be the next victim.

Since police and detectives are not even generally aware or on the lookout for this type of criminal, for me the most important behavioral consideration for an interview like this is: How do we recognize and identify these killers?

Want a shot at getting The Killer Across the Table? Sign up for Creepy Crate now!

The Killer Across the Table is available for pre-order now. John E. Douglas's 16th book joins the ranks of his true crime-classics like Mindhunter and Inside the Mind of BTK, and revisits four of his most gruesome cases. Mining Douglas's quarter century of experience with the FBI, these cases exemplify the four "types" of serial killers proposed by Douglas and co-writer Mark Olshaker.

Ready to start dissecting every off-kilter interaction in your life? Pre-order The Killer Across the Table today or sign up for the next Creepy Crate.