The Chrysalis Warns You to Stay Out of the Basement

The season's biggest horror novel sees a millennial couple wrangle with the evil entity lurking beneath their feet.

Described as "The Shining meets Alien" by its author, Brendan Deneen, The Chrysalis is already generating buzz within the horror community—and is even getting a big-screen adaptation from Oddball Productions and the Gotham Group. Creepy, twisted, and filled with slow-burn tension, it's both a "don't-read-this-at-night" haunted house story and a look at the sinister side of American suburbia. But as Deneen reveals more about the evil at 79 Waldrop Street, he also taps into the real-world scares of entering adulthood. Read on for an excerpt in which Tom ventures into the basement—and experiences the bizarre effects of the “chrysalis”—for the very first time...

The Chrysalis by Brendan Deneen is included in our latest Creepy Crate! Order by September 9 to get your hardback copy, along with a selection of surprise horror-themed collectibles. Use promo code CHRYSALIS for $5 off your first crate (retail price $29.99).

Read on for an excerpt of The Chrysalis, and then download the book. 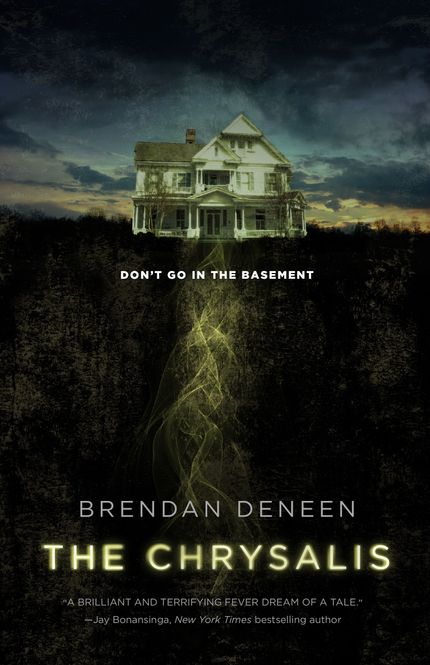 The kitchen looked like the 1970s had thrown up in it. Repeatedly. Polished bronze and white lacquer were everywhere. The stained wooden cabinets, which Tom and Jenny glanced through, were still full of supplies, including half-full spice containers, plates and bowls, dust-covered glassware, and knives and other utensils. On the far side of the kitchen, Tom saw a well-stocked pantry through an open doorway that was right next to a closed door.

“It’s got a lot of personality, that’s for sure,” Chelsea agreed.

“Where does that go?” Tom asked, pointing at the closed door.

“Ah yes, that’s the basement,” Chelsea said through her unnaturally white teeth. “A great space, but it needs some work. Maybe a man’s touch.” Something in her tone drew Tom’s attention; she wasn’t as ebullient or friendly as she’d been earlier. He noticed how tired she looked and that her smile was starting to really look forced. He felt bad for how unenthusiastic he’d been all day. Maybe she’s not as bad as she seems, he thought.

“Why don’t you and I check out the backyard while Tom looks at the basement?” Chelsea said to Jenny. “I could use some fresh air,” Jenny admitted.

“Sounds good to me,” Tom said, absentmindedly pulling an elastic band off his wrist and pulling his hair back into a ponytail. It was warm in the kitchen and he was starting to sweat a little.

Related: 5 Haunted House Books That Will Make You Think Twice About Moving

As the two women went outside, Tom moved toward the basement, then stopped, noticing a large, somewhat faint stain on the linoleum floor. He’d never seen that particular shade of gray before. Some sort of horrible pasta accident, he thought with a chuckle as he walked over to the closed door. The metal doorknob was cold and his entire body shivered when he touched it.

Turning the knob, he pushed the door open and was greeted by a dank, moist odor, like upturned earth after a particularly bad storm. Images of his parents’ funerals flashed through his mind . . . how they had died so close to each other, how Tom had been forced to go through the process twice in the same year when he was in his early twenties . . . but he forced them away. Spotting a light switch to his left, he flipped it; a dirty, naked bulb sputtered on overhead, accompanied by an intermittent ticking noise that seemed to emanate from the bulb itself. The wooden stairs that led down to a cracked, gray concrete floor were old, worn, and not altogether safe-looking. Tom felt dizzy—a familiar sensation he often experienced when entering a new place, somewhere potentially exciting or terrifying.

He walked down the stairs slowly, the wood creaking and even buckling slightly in places. At the bottom, he found and flicked another light switch. Fluorescent ceiling lights hummed to life, crisscrossing the low-hanging drop ceiling. There were a few scattered windows down here, but, Tom saw, they had been painted over. He stared at the contents of the basement for a few seconds in slack-jawed wonder.

Every inch of the enormous space was packed with stuff . . . boxes, black garbage bags filled to near explosion, stacks of books, sports equipment, what must have been hundreds of gardening tools, bags of seed and dirt, camping equipment, at least a dozen old television sets, and who knew what else.

His eyes started to water from all the dust as he surveyed the space. The piles stretched off into the darkness, a lunatic maze of seemingly infinite proportions. Tom took a deep, panicked breath, as if he’d been drowning and surfaced at the last possible moment, then laughed at himself.

“Fucking hoarders,” he said out loud. Jenny would probably love going through all this. She was obsessed with crappy little flea markets and secondhand shops.

He turned to go back upstairs, but a strange noise from the distant shadows stopped him.

“The hell?” he murmured, turning to once again peer into the darkness. After a few seconds, he heard it again. God damn if it didn’t sound like breathing. Watery breathing, as if a sick animal were hidden down here.

Plumbing problems? Tom wondered as he cautiously moved toward the sound, wary of the precarious towers of junk. It got darker the farther he walked, as though the basement were somehow absorbing the fluorescent light, but he was able to discern a kind of path through the piles, like someone had walked this route before. Looking ahead, he squinted at something large and shadowy against the far wall. His breath hitched in his throat, his steps faltering.

A person, huge and hunched, stood facing him.

Related: Demon Traps and 6 Other Creepy Things Homeowners Found in Their Homes

No, that was ridiculous.What would someone be doing down here, waiting in the dark? Fighting the urge to turn and run, Tom reached shaking, sweaty fingers into his beat-up jeans and withdrew his phone, which he immediately dropped. It landed with a hollow thud. Hoping the screen wasn’t broken, he bent down to pick it up. A huge millipede-type insect ran out of a nearby pile of junk and skittered across his fingers—Tom flinched, yelled, and fell back onto his ass. Terrified, feeling like an infant, and hating himself for his reaction, he hit the button on the side of the phone and it blazed with light. He held it up, aiming it toward the person or whatever the hell it was in the corner.

“Get a grip,” Tom mumbled. At that instant, the light went out and his stomach dropped. He quickly hit the button a second time.

Moving closer to the fridge, he noticed markings on the floor in front of it, scrapes in the concrete and shifted dust. He shook his head, intrigued even though a knot was forming in his gut. Someone moved this refrigerator back and forth, he thought, cocking his head as he studied the ground. A lot.

Tom shoved the phone back into his pocket, plunging the corner back into darkness, and took hold of the fridge. Slick with sweat, his fingers slipped. He quickly wiped them on his shirt and grabbed the antique appliance again.

It was heavy. Really heavy. He smiled at the challenge, then tightened his grip and pulled with all his strength.

The refrigerator inched forward, then seemed to find its path, swinging to one side as if it were the door to yet another hidden passageway, opening into darkness like a toothless grin.

Panting slightly from the exertion, Tom squinted into the shadows.

Stuck to the wall, previously hidden by the refrigerator, was a dark pulsating mass about the size of a baby.

“Jesus . . .” Tom whispered. It resembled an oversized chrysalis, reminding him of days spent in the woods when he was a kid. Back when he had parents, had a family. But he’d never seen anything quite like this—the size, the color, everything about it seemed somehow wrong.

Despite the fear nestling in his stomach, he leaned closer, his eyes having adjusted to the darkness. Black and dark-purple veins covered the object, and he realized that the slow, rhythmic breathing noise he’d heard earlier was coming from the chrysalis. So was a rancid smell, like days-old garbage or the scent of a body after it gave up the ghost. The thing was covered in a thick, shiny mucus that caught what little light reached back here.

Disgusted, Tom looked around for something he could use to get rid of whatever this was, the same way he handled cockroaches or spiders or even mice in their apartment. If they ended up buying this house, he didn’t want Jenny to inadvertently come across whatever this thing was. His gaze came to rest on a short-toothed metal rake. The teeth were incredibly sharp looking, making the tool resemble a medieval torture device more than a suburban gardening implement. He picked it up and tapped it against the floor a couple of times, liking that the bars of the rake were stiff, unbending. Strong enough to be used the way he intended. The splintered wooden hand felt comfortable against his palms, reminding him of working in the backyard with his dad when he was a kid. Some of the only good memories he had of the man. Maybe Tom could get used to living in the suburbs again.

Related: 13 Horror Novels to Read While on Vacation

Turning back toward the chrysalis, he raised the rake, ready to destroy this bizarre object stuck to the wall. Just before he swung, he paused. Had the “breathing” increased, or was that his imagination? The veins also seemed to be pulsating. Tom stared at it, makeshift weapon still raised. What is this thing?

He dropped the rake, which clattered onto the floor, and stepped forward. He could feel something intangible radiating off the chrysalis. Blood pounded in his ears, and a wave of excitement swept through him as he reached out. Before he could even question his actions, Tom carefully placed his hand on the dark mass. It was warmer than he expected, soft and spongelike. It pulsed, shrinking away and then expanding back into his grasp, as if frightened and then accepting, pulsating into his palm over and over and over again.

After a long moment, Tom pulled his hand away. Mucus stretched between his fingers and the still-throbbing chrysalis, arcing through the air, connecting them.

He stared at his glistening fingers. They seemed very far away, as if they were falling to the floor while the rest of him stayed in the same place. The entire basement brightened, went black, then lit up again, darkness and light oscillating in a regular rhythm. The chrysalis grew larger, its shape morphing, human hands and faces reaching out toward Tom from beneath its surface, beckoning him closer.

Voices whispered his name. His skin seemed to slough off in the same instant that his blood was absorbed by his bones, which turned to dust. He blew away in a sudden gust of wind, only to re-form in the same spot, the lights above him flickering, his eyes opening and closing even though, he knew, his lids were completely gone. He disintegrated and reappeared once, then multiple times. Time stood still.