Mark Mangelsdorf: The Man Who Killed His Best Friend and Got Away with It for 24 Years

When David Harmon was murdered in 1982, his wife claimed it was intruders. But Melinda had been having an affair with David's best friend, Mark Mangelsdorf.

Olathe, Kansas is located in the heart of the bible belt and home to Mid-American Nazarene University, which was established by the Church of the Nazarene—an evangelical denomination of Christianity. But the events that ensued in the Harmon household on a February evening in 1982 were anything but holy.

Sometime in the middle of the night, David Harmon was murdered. His wife Melinda was sleeping beside him when the horrific attack occurred—waking up to find two men beating her husband to death with a crowbar. She was then dragged down the stairs and knocked unconscious after handing over the key to the bank where her husband worked, which is what the intruders were after.

At least … that’s the story Melinda told authorities in 1982.

What really happened is far more sinister. Mark Mangelsdorf, David’s close friend, was having an affair with Melinda, and the duo conspired to get David out of the picture in the most permanent way possible. And although there were glaring holes in Melinda’s story about “intruders,” her father’s high position in the Nazarene Church led to David’s murder case running cold. That is, until 2001, when detectives reopened the case and interviewed Melinda again—who was remarried with three children. This time, Melinda’s story was vastly different from the original tale she spun in 1982. Soon the grisly truth of what happened to David Harmon would come to light. 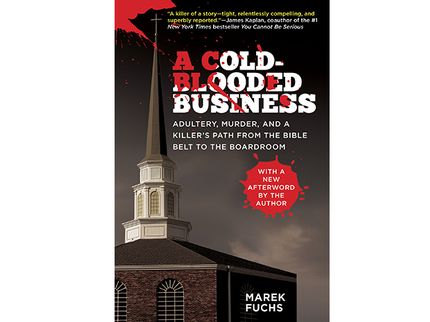 Sometime in the middle of that night, Gayle Bergstrand heard heavy thudding noises coming from the Harmons’ duplex next door. Sounds that were like a repeated smacking of meat. Twelve, maybe 14 thuds? In two separate batches about a minute apart. She listened closer, going so far as to put her ear against the wall, but the commotion was followed by utter silence.

She woke Richard and explained what she had heard, but he told her not to worry.

There must be an innocuous explanation for it all. It was surely just a stray sound from the street, or, at worst, David falling down the stairs.

Richard went back to sleep. Gayle did not. She focused on David tumbling down the stairs. David was big, she knew, but more than a dozen smacks and in two batches? Did he throw himself down the stairs once and, that being insufficient, climb back up to do it a second time for good measure?

Gayle roused Richard again. It could have been a noise from a train, or a car backfiring, he said. But she knew it wasn’t a train or a car. Trying to figure out what she had heard on the other side of the wall filled Gayle with such foreboding that she was not by any leap of faith—or trust in Richard’s intuition—going back to sleep.

She went into the other bedroom and lifted the baby from the crib. She noticed a light on in the backyard. And was that someone running outside?

Gayle went back to bed, now cradling her baby, next to her sleeping husband.

She was strangely relieved when, at about 3:30 A.M, someone rang her doorbell, followed by a series of desperate knocks on the door. At least one leg of the suspense was over. Though, to be sure, a whole new one would begin.

Gayle woke Richard with a well-directed kick. He went to the front door, opening it no more than a sliver.

David had been attacked, she said calmly, and she had been knocked out cold. By “blacks,” she added, after giving them the keys to the front door of the bank where David worked.

Melinda’s story didn’t seem well-rehearsed, but it did sound too calm. In fact, considering how collected Melinda appeared, Gayle’s first impression—despite having heard the sounds from the other side of the wall—was that Melinda was exaggerating. Was it humanly possible to be so restrained, Gayle asked herself, in the aftermath of an attack and burglary? Where was the panic? The slightest degree of breathlessness?

Melinda didn’t say anything about David’s condition, and Gayle didn’t ask. Instead, Gayle called the police. She put her arm around Melinda, who was wearing a nightgown with a blanket wrapped around her shoulders. Gayle asked what else she could do. Melinda told her to call an aunt and uncle who, along with so many of her relatives, had recently migrated to Olathe. Gayle dialed the number but the uncle and aunt either weren’t home or were able to sleep through the endless rings.

Melinda told Gayle the same story she would soon tell police. She awoke in bed to the sound of David being beaten by two black men. She was then pulled downstairs to the living room. One man said to the other, “I think you hit him too hard. You may have killed him.”

They forced Melinda to hand over the bank keys, which were sitting in a dish, then struck her, knocking her out.

Mark arrived 10 minutes after Gayle called, appearing freshly showered and wearing a corduroy blazer. By now a large group of police officers, including a crime-scene photographer and several detectives, had arrived. Paul Morrison, an ambitious assistant district attorney, was among the first on the scene. He was led up the staircase to the bedroom. Paul could see a blood spatter that ran halfway down the hallway outside of the bedroom. In the room, on the bed, face up, with the blankets pulled up around him, was David.

At first glance, Paul couldn’t tell for sure whether the person lying dead on that bed was a man or a woman. He stood there fixated, watching a plume of foamy blood still swirling in David’s mouth. As if he were still alive.

It was Paul’s first murder scene. He needed air.

Outside on the patio, sucking in the cool Kansas wind, Paul turned toward the patio door. There was no sign of forced entry. Leaving that door unlocked at night along the busy Route 7 would take a foolish amount of trust in the goodness of passing strangers, even in such a small town. Mark’s fingerprints would be found on the patio door, though there was no way to tell whether they were left there on the night of the murder.

Paul went next door. There he found Mark comforting his friend. For a woman who claimed to have been knocked unconscious for over an hour, Melinda was up and about with apparent ease, a fact that didn’t escape Paul’s attention or that of the other investigators at the scene. The bruise on her cheek (could someone be knocked out by a bruise to the cheek?) was slight. Paul had to squint to see the mark. His suspicions were roused.

Back at the Harmons’ apartment, James Bridges, the coroner, removed David’s bloody pajama top with his bare hands. He always worked crime scenes barehanded. And he worked—in his official capacity—out of the back of Frye’s Funeral Home, often eating donuts during examinations of the dead.

“You’re not worried about him thrashing around?” someone called out, with dark crime-scene humor.

“I think he was asleep,” Bridges responded, in no mood to joke. Rick Lees, another Olathe cop, snapped pictures.

David’s body was on the left side of the bed. The killer had landed the brunt of the blows around David’s eyes and nose, which were caved in. The way blood was spattered to the left, even all the way outside of the bedroom and down the hall, seemed to indicate that the murderer, with long and powerful arms, had stood on the right side of the bed, possibly reaching over Melinda as he bludgeoned her husband, though the blood soaking her pillow made it unlikely that she had occupied her side of the bed. Maybe he was looking to gain distance to avoid getting bloodied. Or maybe he needed a few feet to remove himself, in spirit, from the deed. David’s body had no defensive wounds, a fact that formed the basis for Bridges’ conclusion that David had been asleep, presumably on his back, when he was attacked.

This meant the killer had a free and open look at the victim’s face before striking the first blow. Judging by the condition of David’s barely recognizable face, this was a crime of passion. Were it not for the pillow behind it, David’s head might conceivably have been knocked off his neck.

The murder weapon must have been an instrument of blunt force. Something heavy and swingable, capable of inflicting brutal damage with crisp efficiency. A crowbar seemed likely. Or perhaps a 12-gauge shotgun fired at close range. The first police officers to arrive at the scene, reacting to the fact that David’s face was completely pulverized, had reported when calling for additional personnel that the victim had been shot.

Either that, someone at the scene joked, or he was run over by a truck.

Gary Dirks was a forensic scientist at the Johnson County Crime Lab, but it did not take formal training to see that the placement of the body seemed a touch staged. Before the coroner removed David’s pajama top, revealing the victim’s midsection, Dirks noted that the bed sheets had been pulled up around Harmon’s shoulders. There was blood under the sheets, indicating that the sheets had been moved after the blows were struck and blood sprayed.

Dirks also couldn’t find so much as a single strand of “negroid hair,” as he called it, anywhere in the Harmons’ duplex. There seemed to be blood on the lower portion of the shower curtain. Had the killers stopped to soap up before they left the house?

Joseph C. Pruett, a warhorse of an Olathe detective and a real cowboy, quite literally, was conducting interviews at the Bergstrands’ house. The old generation of detectives like Pruett (who himself favored Stetsons) wore cowboy hats, cowboy boots, the whole bit. Mark emphasized to Pruett that his arrival so soon after David’s murder suggested no darker motive than to help one friend and mourn another. After all, the Harmons had taken him under their wing.

The way Paul saw it, Mark, composed and smartly dressed, was way too confident. Paul wondered where that crowbar was hidden, but there had clearly been time to get rid of it.

During their initial questioning, Mark and Melinda both told Pruett that while they were alone in the Harmon house, while David was off playing floor hockey with the Jakabosky brothers, they had taken separate naps.

An attractive young man, the runaway hit of his college campus, and an equally attractive young woman, alone, while her chubby husband was off playing a boy’s game. Pruett wasn’t born yesterday.

All Photos: Via My Life of Crime