The Most Disgusting and Disturbing Garbage Pail Kids Cards

If you were an 80s kid, you probably remember the morbidly fascinating Garbage Pail Kid stickers. Launched in 1985 for a whopping $0.25 a pack, you got five cards and a stick of bubble gum. Or what resembled bubble gum. I'm not entirely sure those shattered, chalky sticks were actually edible. But, *shrugs*, it was the 80s.

Starting with the initial 41 card run, an additional 15 sets were released, totaling 620 designs. But since each card came with at least an alternate name attached, that meant by 1988, there were over 1,000 weird, wacky, and totally gross characters for kids to trade and collect

Now that the kids have kids, Abrams Books is releasing The Garbage Pail Kids Cookbook, by Elizabeth Weinburg and Matt Stine, illustrated by Joe Simko—with a foreword by R.L. Stine. Featuring 35 kid-friendly recipes inspired by the original art, we couldn’t help but get nostalgic. We dredged through the gross, the bizarre, and the humorous to find the thirty most disgusting and disturbing cards. If you want a glimpse into how bizarre the 80s truly were, this listicle is for you.

By Elizabeth Weinburg and Matt Stine, illustrated by Joe Simko 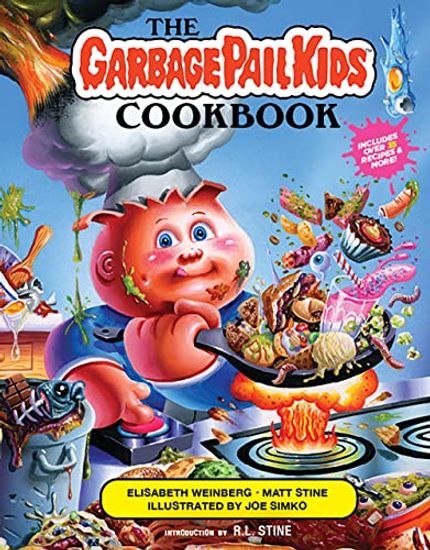 Honestly, it’s the details that get us here. The sweat dripping down her face, the tiny airplanes on her dress. Considering that falling is one of the most common and terrifying dreams ever, we think being tied to a bomb is a bit of trauma overkill.

We’ve all had nightmare stories about cutting ourselves while shaving, and for 80s kids, maybe this is where our fear all began. We can’t stop cringing every time we look at this card.

Throughout the series there are a lot of cards involving vomit, but this one took the upchuck trophy. Did he barf up his dinner only to eat again? And why is he enjoying it so much?

All we can think of when we look at this card is jazz hands gone wrong. Where are his teeth? What is his head made of? And most importantly of all, WHY?

Another common theme among these cards is snot in all forms. But holy moly, really? The levels of gross coming out of this child’s nose gave us all nightmares for weeks.

What is Russ/Louise squeezing? A zit? Snot out of his nose? We actually don’t want to know because just looking at that bowl had us gagging.

Putting a bajillion heads, faces, eyes, and pimples all over a Garbage Pail Kid was bad. But the faceless mouths are somehow the grossest of gross and we would like a refund.

Related: 6 Horror Movies That Have Made People Physically Ill

And suddenly, every scary dream we had as kids about escalators eating us alive is justified and back in rotation.

We were delighted and horrified to find an accurate representation of how hangry feels.

A lot of these cards had us crawling out of our skin but this one sent us reeling. The most disturbing part is it doesn’t even look like he had a shirt on to begin with, which raises a lot of questions we don’t have answers for.

If the eyeball melting out of her face wasn’t gross enough for you, let us point out the blood-red drops of her dress and the fact that she’s literally oozing into nothing. As kids, we could never look at candles the same.

Vacuums. Dogs bark at them. Cats run from them. Maybe a vacuum looks innocent to an adult, but let’s be real, getting the skin sucked off of our faces was exactly what we were afraid of when we were kids.

There probably aren’t a lot of children who know what a varicose vein is, but as kids, this card made us absolutely certain we should be very, very alarmed by them. This image is terrifying and painful and we’d like to erase it from our brain, please.

We didn’t even know what vivisection was in 1987. But thanks to this card, we learned a whole lot of fun facts that continue to horrify us to this day.

Related: 10 Evil Doctors That Will Make You Sick

We can’t be the only ones who had an almost paralyzing fear of getting our tongue caught in the mixer, right?

This hungry eyeball reminds us a little too much of the carnivorous Audrey II from Little Shop of Horrors. Maybe that’s the point, but if that’s the case, feeding that eye is the last thing Ivan/Sty should be doing.

Remember when losing your teeth was commonplace? It still gives us the heebie-jeebies. We just can’t get over the fear that more than a tooth will come loose and thank to this card, we never will.

Popping zits of various sizes is also a reoccurring theme throughout this series, but for the love of keeping our lunch down, why did they need to squeeze a whole person out of one?