We Keep the Dead Close exposes the horrors behind a respected institution.

In 1969, a young woman named Jane Britton was slaughtered in her off-campus Cambridge, Massachusetts apartment. Britton was a graduate student at Harvard University. Although everyone in her program claimed to know exactly who was responsible, Jane Britton’s murder went officially unsolved for decades.

Forty years later, Becky Cooper heard the story of Britton’s death for the first time. Its tawdry details captured her attention, especially the claim that a professor, still on campus, had murdered the 23-year-old graduate student. Could it be true that Harvard's elites would go so far as to protect one of their own, ensconcing the killer within the university's walls?

Despite her moving away from Cambridge and leaving Harvard far behind, Cooper knew there was more to Britton’s unsolved murder than the rumors whispered on campus—or even what could be found in the official police reports.

In 2018, she started working on We Keep the Dead Close, a true crime book that investigates not only the tragic death of Jane Britton, but also the systems that keep Harvard, and all those who move within the university's power circle, at the top of the game.

Cooper’s second book is sure to keep readers up through the wee hours… and keep them thinking long after the final page is turned. We’re thrilled to include We Keep the Dead Close in the October/November Creepy Crate. Subscribe to Creepy Crate now for your chance to receive a copy of this enthralling new true crime read.

Read on for an excerpt of the book, and subscribe to Creepy Crate for your chance to receive an advanced copy of We Keep the Dead Close!

We Keep the Dead Close 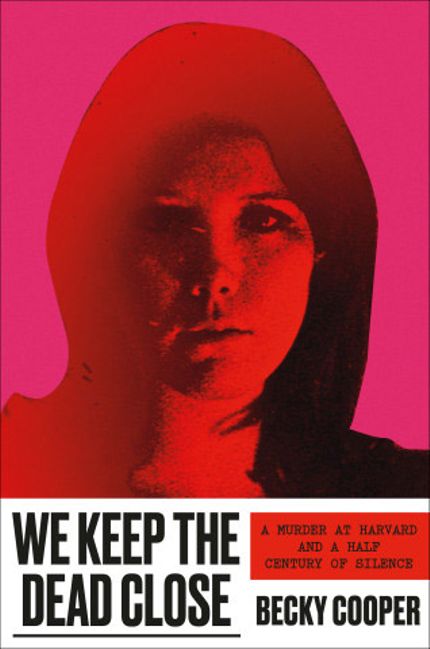 That night, after reading all the articles I could find about Jane, I lay there unable to sleep. Some of what I was feeling was exhilaration. A lot of it was fear. The story, after all, appeared to have been effectively silenced; it seemed possible that Harvard had systems in place to ensure that it maintained control of the narrative. Would they kick me out of the school? Would I be disappeared by morning? Would someone come into my dorm and bash my head in? My conjectures were decreasingly tethered to reality. Still, I couldn’t be sure the lengths to which Harvard might go to make sure this story stayed buried.

But most of what was keeping me up was an incredulity verging on anger. Seeing Karl’s name in the articles had made the rumors about him feel plausible. If the story was true, why was no one listening or investigating? I couldn’t accept the possibility that this was just an open secret I would file away and move on from. The way I saw it, either Harvard had covered up a murder and was allowing a killer to remain on faculty, or we were imprisoning an innocent man with our stories. I wondered if I could be the one to take this rumor seriously.

The impulse to solve Jane’s case was a familiar one. As a child, I was obsessed with crime, with secrets, and with puzzles. One of my earliest memories is of being fixated on some graffiti underneath a piece of kindergarten playground equipment that said: jesse james was here. I became convinced that Jesse James was a fugitive who had left a net- work of clues on all the playgrounds in Queens. Every time I went to a playground, I always checked underneath the slides and under the dirty wooden slats. A wad of gum would turn into a signal to his bandit girl- friend that he had been there and was on the run, but still okay. Graffiti in the same pen but a different handwriting meant that someone was close on his tail.

Get terrifying true crime stories delivered straight to your inbox when you subscribe to The Lineup's newsletter.

In middle school, my drive to investigate fed my affinity for being an observer, and I became a watcher, a chameleon of social habits. I tried to conceal the fact that I almost always felt like an outsider by scrutinizing the way people talked, the way people ate, and then adopting the patterns of those around me.

Later, I dreamed of becoming a forensic analyst, a cryptographer, a neuroscientist with a focus on abnormal psychology—anything that let me be the one to solve mysteries. I ultimately chose writing because I felt I could, through narrative, get into the mind of my character in a way that was more real, if less scalably objective, than by scrutinizing calcium and potassium channels.

Over the years, I never lost my sense that there was more under the surface or my desire to get inside the dark. But lying there that night, I was also old enough to recognize that my belief that I could solve a murder on my own that had eluded cops for over forty years might be as naive as the thought that I could find the whereabouts of Jesse James.

Detectives William Durette, Michael Giacoppo, and Fred Centrella arrived not long after Don Mitchell’s call to the Cambridge Police, and when they entered Jane’s room, her cat skittered out from his hiding place. The detectives took stock of the scene. Valuables—money, jewelry— lay untouched, in plain sight. There were no signs of a struggle in the apartment, except for the bloodstained bed. Two of Jane’s windows were open, despite the freezing Cambridge winter: one in the bed- room, which looked out on the Bennett Street parking lot; and the other in the kitchen, which led out to a fire escape and overlooked the courtyard.

Detective Lieutenant Leo Davenport, the head of the department’s eighteen-man Bureau of Criminal Investigations and acting chief of the homicide division, would later publicly dismiss the significance of these open windows. The heat in the building was “oppressive,” and it wasn’t unusual for residents to have their windows open all winter, he told the press.

“She was a good girl. I can’t understand why something like this should happen to her.”

Davenport, a petite man whose hair looked like it was blackened with shoe polish, had been with the Cambridge Police for a dozen years. He graduated with the first class of the Cambridge Police Academy in 1947, known as the “class of brass” for how many of them advanced through the ranks. Davenport was already familiar with Jane’s building because of its history of violent crime. In 1961, Jean Kessler, who had moved to the area for a job in Harvard’s Music department, survived a hammer attack in her home. One report said it was her curlers that saved her. And Davenport himself had been assigned to the 1963 stabbing case of Beverly Samans, which happened just a few units over from Jane’s. Albert DeSalvo, the apparent Boston Strangler, confessed to the crime, but some doubted his story. The case remains open.

Police invited Jane’s parents, who had arrived shortly after the detectives and were sitting in the Mitchells’ apartment, to enter Jane’s room. Jane’s father, J. Boyd Britton, was still in the suit and tie he had worn to work. He surveyed the room at the police’s request to note if anything was missing. Nothing obvious, he concluded. Jane’s mother, Ruth, approached her daughter, who was still lying on her bed.

Ruth burst into tears at the sight. “She was a good girl. I can’t understand why something like this should happen to her.”

Detective Giacoppo, thirty-seven, dusted the apartment for fingerprints and pulled a number for further analysis. He had long been driven by a sense of adventure and duty, lying about his age to fight in World War II. He took a few items from Jane’s room as evidence and collected some samples for chemical analysis, but he planned to do the bulk of the processing and crime scene photographing the next day. He did not find a weapon.

While Giacoppo studied the crime scene, other detectives interviewed the neighbors. The building superintendent’s seven-year-old daughter reported having heard strange noises on the fire escape that led to Jane’s apartment from the courtyard around 9 p.m. But detectives dismissed this observation because Don said that he had entered Jane’s apartment after that time to get a beer from her fridge and found nothing amiss. Another woman who lived in the building said she returned home at 12:15 a.m. and heard nothing. Stephen and Carol Presser, who lived in the only other apartment on Jane’s floor, told a reporter that they didn’t know her well, but they had been at a party with her on Saturday where she seemed to enjoy herself. Stephen, a Harvard law school student, said that he and Carol had been home and awake until two in the morning the night before. They heard nothing unusual, but the building did a good job at muffling sounds. They once ran a test where they turned on a stereo as high as it could go and listened from the next apartment. “We couldn’t hear a thing,” Stephen said. Old plans for the building revealed that the maple floors had been built specifically to be soundproof.

The only unusual thing, Carol said, was that their cat, Oliver Wendell Holmes, had been behaving strangely all night. From 8 p.m. until they went to sleep, “he was acting wild and making noises—like screams [...] He has never been like that before.”

Neither of the Cambridge police patrolmen reported seeing anything unusual in the University Road area between 1 a.m. and 7 a.m. the previous night. A transit worker said he saw a man—170 pounds, about six feet— running from the building around 1:30 in the morning, but given the heavy downpour, it didn’t strike him as unusual.

Get terrifying true crime stories delivered straight to your inbox when you subscribe to The Lineup's newsletter.

The closest thing that police had to an eyewitness was Ravi Rikhye, twenty-two, a former Harvard student, who had been rooming with the tenants of 5B. Ravi said that around 12:30 a.m. the previous night, he had heard the shuffling of feet on the icy sidewalk, and then a man shouting, “Get to the car, get to the car!” He looked out the window and saw two men—both with long, swept-back hair—running to an idling vehicle. But the tenants of 5B could not corroborate Ravi’s account.

By late afternoon, word had reached the press, and reporters and photographers craned on the stairway to try to catch a glimpse of the crime scene. Officer Benjamin Capello stood outside Jane’s door to prevent them from entering. But he couldn’t stop them from lining up in front of the Bennett Street garage. They were there, ready, when detectives carried Jane’s body out of the building on a stretcher.

Want to keep reading? Subscribe to Creepy Crate for your chance to receive an advance copy of We Keep the Dead Close before its November release!