Will justice ever be served?

It's safe to say that we're in the golden age of Internet sleuthing. Information that once languished in cold case files is now readily accessible to curious armchair detectives. Some of these amateur sleuths go on to create true crime books, shows, and podcasts that bring a whole new perspective to cases that once appeared to be open-and-shut. Take, for instance, Serial and Making a Murderer, two smash hits created by teams that are by no means professional investigators, yet still managed to unearth shocking new information.

If you’re interested in more true crime coverage that will turn your understanding of a case upside down, you need to add Amber Hunt and Amanda Rossmann’s hit podcast Accused to your must-listen list. The first season of Accused covers the unsolved 1978 murder of 23-year-old Elizabeth Andes, who was found strangled and stabbed to death in her Ohio apartment just days after her graduation from Miami University.

Only one man was ever tried for the brutal murder, but he was acquitted. Amber Hunt, a reporter for the Cincinnati Enquirer, and Amanda Rossmann, an Emmy-award winning photojournalist, refer to their work on the Elizabeth Andes case as an “investigation of the aftermath of an innocent verdict.”

“There are a lot of investigations out there – some with podcasts even – examining whether people were wrongly convicted of terrible crimes,” the duo wrote in an article published by the Cincinnati Enquirer. “This isn’t one of those.” Instead, according to Hunt and Rossmann, it’s an investigation into “how law enforcement – so sure that they had the right man despite two juries saying they didn’t – gave up looking for the person who strangled and stabbed Elizabeth Andes, a young woman in a college town.”

What made the police give up on the case is as much of interest to Rossmann and Hunt as who killed Elizabeth Andes—and who Andes was in the first place. “It isn’t that there weren’t other people to look at,” Rossmann and Hunt wrote. “There were plenty. But no one bothered.”

Back in 1978, Andes’ brutal slaying shocked the town of Oxford, Ohio, which hadn't seen a murder in a quarter of a century. Police wasted no time in pointing the finger at Andes’ football player boyfriend, Bob Young. It was Young who found Andes’ bloodied body on that December day, and, even years later, local police still insist that he was responsible for her death.

After 15 hours of interrogation, during which Young was given a lie detector test that he was told he failed, he broke down and confessed to the murder of his college sweetheart. He would later say that Richard Carpenter, the lieutenant who administered the polygraph, “scared the hell out of me.” He also immediately recanted his confession, but local police were certain that they had found their killer.

However, the jury wasn’t so sure. When Young went to trial in the spring of 1979, as his attorney later recalled, the only shred of evidence that implicated his client was the confession obtained under duress. To the jury, it wasn’t sufficiently compelling, and Young was acquitted.

Two years later, Andes’ family took Young to civil court in a wrongful death suit where he was, once again, found not liable. Though police were convinced they had found their man, he had been acquitted not once, but twice. Where does the pursuit of justice go from there? In the case of Elizabeth Andes’ murder, it was shoved into a forgotten cold case file for nearly 40 years, until Rossmann and Hunt decided to dig it back up in 2016.

In their podcast, Hunt and Rossmann reveal several leads that had gone largely unexplored by the police at the time—likely because they were too convinced of Young’s guilt to give sufficient attention to other possibilities. Among the additional persons of interest that Hunt and Rossmann track down is Steve Greene, a maintenance man who may have been the last person to see Elizabeth Andes alive.

Shortly before her death, Andes was angry because Greene had left the door to her apartment unlocked after fixing a lightbulb while she was away on break. Is it possible that Greene was telling the truth about locking up, and that someone else was in Andes’ apartment while she wasn’t home? Greene also left the state just days after Andes' murder, which could be a coincidence—or the actions of someone trying to cover their tracks.

Another person of interest is a local eccentric who professed his love to Young and gave him what seemed to be a blood-spattered pin cushion—a particularly sinister gift, since Andes was stabbed to death with sewing shears. Then there was Andes’ boss, who reportedly had an unrequited crush on the young woman, and spent time with her the night before she died.

Hunt and Rossmann also look into the possibility—largely ignored by authorities—that Andes was the victim of a serial killer who may have been traveling the country at the time. Of course, it’s also possible that Bob Young really did commit the crime, and has managed to evade justice for all these years.

Ultimately, we may never know for sure what happened to Elizabeth Andes, whose friends described her as a cheerful and bubbly young woman all those years ago. But thanks to investigative reporting carried out by the women behind Accused, we at least have more theories to explore, giving us hope that justice will eventually be served.

By the end of its first season in 2016, Accused had reached the number one spot on the iTunes podcast chart, and had been downloaded more than 430,000 times. A thoroughly researched and engaging podcast, we can’t recommend Accused enough. However, for those who prefer to consume true crime in a different medium, Hunt and Rossmann have also released a book of the same name. Accused collects transcripts and other notes from the first season, giving readers an exclusive inside glimpse into a compelling, decades-old cold case.

By Amber Hunt and Amanda Rossmann

Transcripts from the popular true crime podcast tell the story of one of Ohio’s infamous cold cases: the fatal stabbing of a Miami University graduate. 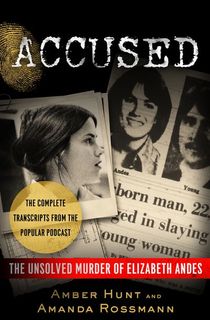