Paul Holes Exposes the Dark Side of Clearing Cold Cases

In his new memoir, the celebrated cold case investigator shares an inside look at the reality of solving infamous crimes.

For years, the man once known as the East Area Rapist, the Golden State Killer, and the Original Night Stalker haunted the residents of Californian suburbs. In 1994, a young man was sworn in as an investigator for the Contra Costa County Sheriff’s Office and rediscovered the files of unsolved rapes and burglaries from the 1970s. Paul Holes and his investigative partner Michelle McNamara would go on to become inextricable from the case that would eventually identify one Joseph James DeAngelo as the Golden State Killer.

Outside of the celebrity and attention brought about by the 2018 identification of DeAngelo, Holes’ years of work as an cold case investigator touched some of the most recognizable crimes of recent decades, as well as fascinating cases that have flown under the radar.

His new memoir, which will be published on April 26, covers his experience with the Golden State Killer, the Laci Peterson case, and the East Bay Strangler, also known as Philip Joseph Hughes, Jr. Readers will find themselves confronted with the reality of what it means to pursue cold cases, from the toll it can take on your personal relationships to the incomparable thrill of knowing that you have helped bring a sense of justice to a victim’s family.

In the excerpt below, Holes, mere months after the identification of DeAngelo, is struggling with the cold case of Carla Walker, a 17-year-old murdered in 1974 just outside of Fort Worth, Texas. The memoir is filled with details that will fascinate true crime lovers of every stripe.

We’re thrilled to be including Unmasked in the April/May Creepy Crate—get your sneak peek now, then subscribe for your chance to receive a copy!

Read on for an excerpt of Paul Holes’ upcoming memoir, Unmasked. 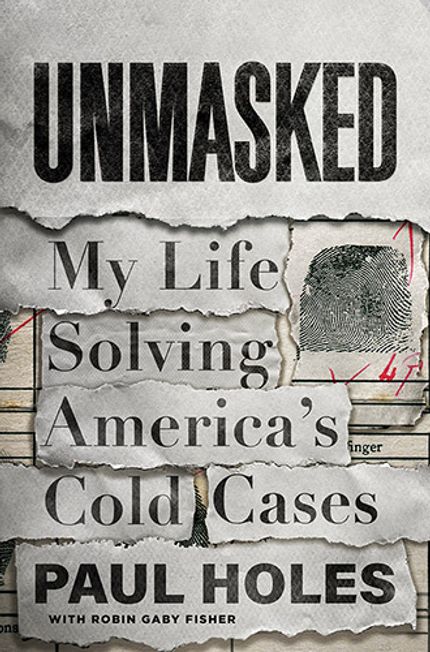 It was the end of May before I sat with myself to reflect on the Golden State Killer case. The weeks after the press conference were packed with media requests and calls from agents and television producers asking if I’d be interested in talking about the case. I was getting more than a hundred calls a day from journalists all over the world. That spring afternoon I was home at the new house in Colorado for the first time in two weeks. Sherrie and the kids were out, and it was quiet. I poured myself a bourbon and pulled up a photo of DeAngelo that I’d taken on the night he was arrested. He’s sitting in the interrogation room, hunched over and alone, looking dejected. “Got you,” I said out loud.

The case had brought me a kind of celebrity. For two years following the arrest, I was on the road for all but a few days assisting agencies across the country with cold cases. Sherrie had been left alone to settle herself and the kids into our new life, while I pursued cases for a crime show on TV. That was how I was introduced to the Carla Walker case in Fort Worth, Texas. Meeting Carla’s brother, Jim, in December 2019 had an emotional effect on me that I hadn’t expected. Hearing him recount how, as a boy, he’d returned time after time to the lonely culvert where Carla’s body had been found, something inside of me broke.

Jim was a seventh grader with freckles and tousled strawberry blond hair when Carla was killed. He was with his parents when, three days after Carla didn’t come home, sheriff ’s officers came to the Walkers’ front door to give his mom and dad the news that her body had been found. He had gone with his parents to the hospital morgue to identify Carla’s body and stood by helplessly when they collapsed with grief. More than four decades later, his mother’s scream still rang in his ears.

I clenched my teeth, trying to keep my composure. “It’s such a hard way—to have to identify a loved one like that,” I said, fumbling for words, as if any words were appropriate at that moment.

“As a twelve-year-old kid, that’s what angered me. I saw the devastation—on the family and our community,” Jim said. “Fear escalated. There’s a killer out there among us.”

“You saw where she was found?” I asked.

Jim said when he was old enough to drive, he took a ride out to the culvert where Carla’s body had been dumped. “I wanted to see it,” he said haltingly. “I wanted to know . . . if my sister was still alive when she went into that . . . place . . . what she saw, what she smelled, how it felt. I sat out there for six hours one night. It was cold. I just wanted to experience that.” He said it was the first of many nights he spent there, waiting and hoping that Carla’s killer would return to the scene of the crime, as killers sometimes do.

My words caught in my throat. I was looking at a tormented man who, as a boy the age of my youngest son, had been sentenced to a life tied to that cow culvert. How can that be justified? How could I not do whatever it took to help quiet his troubled mind and bring him the peace that only justice might? How could I not make Carla’s case a priority over everything else in my life when there was a chance I could help to ease his suffering?

When a cold case is reevaluated, the people closest to the victim are assessed. That means meeting with their relatives and friends. When so many years have passed, there are bound to be people in that circle who have passed away, which Carla’s parents had. But her siblings were still living—Jim and older sister, Cindy—as was Carla’s boyfriend, Rodney, who had been with her at the time of her abduction and still lived under a cloud of suspicion forty-five years later. When it happened, Rodney told police that he and Carla had been parked at the local bowling alley after the prom when a man with a gun pulled open the passenger-side door, struck him in the head with the butt of a gun, and dragged Carla out of the car. The last thing he heard was Carla say, “Go get my dad!” When he regained consciousness, Carla was gone.

I visited Rodney during my time in Fort Worth, where he still lives. He’s in his early sixties now and divorced. When we met, he was in the process of getting over a hurtful breakup with a longtime girlfriend, and I sensed an underlying sadness. Other than that, life seemed to have treated Rodney pretty well. He’d had a successful white-collar career and was still a good-looking guy in top physical shape. He told me he did a hundred push-ups a day. Rodney came off as a genuinely likeable guy. Here I was, coming in to drudge up the worst night of his life, to ask him pointed questions, yet he was gracious and welcoming. It wouldn’t take long for me to see that 1974 was as close as the tears waiting to spill down his cheeks.

“She was stolen,” he said, his obliging smile suddenly quivering. He bit his lip and looked off into the distance, trying to compose himself. “I was part of what happened,” he said, his words fraught with remorse. Watching him try to hold it together, I thought, If he has nothing to do with Carla’s murder, how unjust it is that he has had to live under a cloud of suspicion for his entire adult life. I was pretty sure the residual sorrow and guilt over losing Carla, and the way he lost her, had tainted many moments over the decades.

“You were a victim,” I said, assuming that his story about what happened that night was true.

“We are all victims,” he said looking away, fighting for composure. “There are so many victims.”

It was such a poignant trip. The collateral damage of Carla’s murder was vast and unrelenting. From her parents to her siblings to her boyfriend and the entire Fort Worth community, so many had suffered. So many were trapped in that sad past, yet the person who had taken so much had just walked away.

I was flooded by feelings leaving Fort Worth. Grief over the tragic loss of a young girl’s life. Horror over what she’d experienced during her last moments. Desperation to solve her case so I wouldn’t let her family down. Sitting behind the steering wheel of my car, I sobbed. I’d always been able to tuck my feelings away after each case. When they did escape, it was usually in the form of a middle-of-the-night panic attack. The last one had been so severe I fainted on the bedroom floor. Now my emotions spilled over. I buried my face in my hands. I wondered if I would ever stop crying. I was scared and confused.

After Fort Worth, and my experience at Jumbo’s Clown Room when I returned to California to film the TV series, I went home to Colorado to spend the holidays with Sherrie and the kids. In the evenings, while she sewed, I continued to work on Carla’s case. Forensic testing had been underway as we were filming. During my consultations with Fort Worth investigators, I’d suggested we send Carla’s clothing to the lab for testing. The DNA analyst had given us good news. She’d gotten a semen sample off of Carla’s bra strap. It was a perfect sample for retrieving DNA, and we were certain we would soon have a match we could cross-reference with genealogy. But heartbreak soon followed. The genealogy lab sent a cursory email saying they’d consumed the entire sample and couldn’t get results. We were all crushed. I went back to the beginning. The DNA analyst had found a second source of DNA, although it was a fraction of the first, degraded and not nearly as promising. In May 2020, I consulted with my friend David Mittelman, who in 2018 founded a new technology company, Othram, with a state-of-the-art forensic DNA sequencing laboratory. “They used the wrong technology,” he said when I explained what had happened with the first lab. “We use genome sequencing.” Could our less-than-pristine sample possibly be converted in a way that would be compatible with searching proprietary genealogy databases? I asked. “We’ve got to try,” I said. Yes, he agreed, we had to try. At least there was hope, but I’d been down this road so many times before. Now all I could do was wait on the sidelines while the Fort Worth investigators worked with Othram on the next steps.

Want to keep reading? Subscribe to Creepy Crate now for your chance to receive Unmasked!

This post is sponsored by Celadon Books. Thank you for supporting our partners, who make it possible for The Lineup to continue publishing the creepy stories you love.