Satan at the Door: The Sinister Events That Inspired Jeffrey Konvitz's 1974 Cult Horror Novel The Sentinel

After the success of his bestselling horror novel, Konvitz found himself face to face with a knife-wielding Satanist.

Einstein proved that mass and energy warp space-time. I can prove that the living word can warp reality or perhaps it is reality that can shape and warp the living word.

These events happened. They were real. Did they have a purpose other than to promote my economic and artistic wellbeing? Perhaps!

I began writing The Sentinel in 1971 in my New York City apartment. I had just graduated from Columbia Law School and I was working as a talent agent at a large agency. The idea for the book came to me in the middle of the night. It was three in the morning and I couldn’t sleep, so I wandered into my living room and stared at the books on my bookshelves. In my exhaustion, the philosophy texts and medieval fiction merged before me into ideas for a novel. I began to write every night. For over six months, I struggled with themes and plots and characters and then I hit a wall. I couldn’t pull the pieces together. I became frustrated. I hated the words that teased me and left seeds of doubt in my head. The story wasn’t working. It was eating my insides. I was a lawyer, not a writer. I decided abandon the novel.

There were no computers in those days. I wrote on a Remington electric. Determined to kill the beast, I took the nearly completed manuscript—the only copy I had—and walked it to the incinerator shaft and dropped it down into the fires. I felt relieved; I could return to my life, go to work, and earn a paycheck.

I didn’t know that the week before, based on New York City ordinances, all apartment incinerators had been replaced with trash compactors and our building’s compactor unit had been installed the day before. The next morning, the building superintendent knocked on my door with my manuscript in his hands, my name typed across the front page. “I found this at the bottom of the compactor shaft,” he said. “I thought you might have thrown it away by mistake.”

I was stunned. I took the pages into my hands, and suddenly it was no longer a spear in my heart. It was my heart. The story fell into place as easy as a knife cuts through butter. The path to the novel’s soul was revealed. I finished the first draft. The book that almost died in a shaft became a national bestseller.

Was it just luck? Or was something larger looking out for me?

Want to read the horror book at the center of it all? Download The Sentinel today! 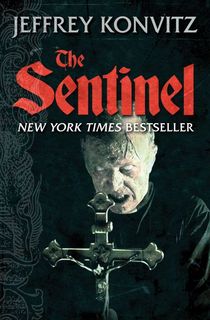 At one point during the book’s revision process, I was stuck on a particular chapter’s rewrite. Each night, my writing regimen was interrupted because the upstairs tenant spent his moon-drenched hours clomping back and forth on his floor. My ceiling lights would shake with each thudding footstep. After a week of this, I was furious. It had to stop.

I stormed to the same super that had saved the manuscript a month before and complained. He had to speak to this joker and either get him to go to sleep or to take off the ski boots he insisted on wearing. The super looked at me as if I was mad. “That apartment is empty,” he said. “It’s been unrented for weeks.”

He took me up upstairs. He was right; each room was completely bare.

Back to the book I went, but my upstairs “neighbor” lived on. I rewrote the chapter so that the protagonist experiences a similar spooky encounter, although she meets a far more terrifying fate than I. In fact, for the novel’s film adaptation, the American Film Institute put that particular scene on its list of the scariest scenes in motion picture history.

Want more terrifying books? Sign up for The Lineup's newsletter and get creepy stories delivered straight to your inbox.

After The Sentinel was completed and it exploded on the bestseller lists, I was working on the screenplay for the film adaptation. One day, while writing in my office at Universal Studios, the gate officer called me and told me that Allison Parker’s anointed successor [Allison Parker is the main character in both the film and the novel] was there to see me.

I thought it was a joke. An agent friend pulling my chain. I told the guard to direct the visitor to my office.

Ten minutes later, a woman barged in. About 30 years old, she was disheveled and wild-eyed, her skin dirty, her hair knotted and unkempt. She was followed by two studio security guards who had been concerned about her appearance and state of mind. She told me she had read my novel and knew it to be true, and that she had been chosen to be the next Sentinel. However, Satan had convinced her to join his armies but to do so, she would have kill herself right there.

She pulled out a knife and put it to her jugular.

One of the studio guards retreated for additional help and before long the studio was on lockdown. Police and crisis psychologists arrived and a tense confrontation ensued for over two hours. The police negotiators and psychologists attempted to calm the woman and subdue her. In the end, I was the one who ultimately talked her out of killing herself. By evoking the characters in the novel and incorporating the novels pivotal philosophical challenge—GOD’S OWN ETERNAL EDICT—I was able to reach her. She finally put her knife down.

I was still shaking long after she was led away in a straight jacket, tied up for her own self-preservation.

My novel had come to life.

That night, still disturbed by the day’s events, I walked into a Catholic church and sat in a pew to think. As a Jewish boy who had written a book steeped in Catholic trappings, it was something I had done many times for inspiration during the writing process.

A priest walked up to me as I was leaving and said, “You did good today.”

I was stunned and bewildered.

“You did good today!” he repeated, his eyes boring into mine.

I challenged him. “How do you know what I did today?”

I sat down again, thinking. He couldn’t have known about the woman. Perhaps his statement was just an ambivalent gesture, something a cleric would make off-the-cuff. Nothing more. But on the other hand, I really didn’t know.

Is there really such a thing as a Sentinel? I think so. Even if it is in each of us and no more than that …

But on the other hand … he or she may be out there, watching and waiting.

Want to read the horror book at the center of it all? Download The Sentinel today!

Featured still from "The Sentinel" via Universal Pictures