A Death in Canaan: Why Did Peter Reilly Confess to His Mother’s Brutal Murder?

In 1973, a brutal murder happened in the little town of Canaan, Connecticut. A teenage son had murdered his own mother, slashing her throat and sexually assaulting her. It had all the makings of a crime of horrendous proportions, incomprehensibly vicious and utterly vile. But the most terrifying truth of all was yet to have been revealed: Peter Reilly may have in fact been innocent, wrongly coerced to confess to a crime he didn’t commit.

A Death in Canaan tells Peter’s story and the horrors of a justice system gone terribly awry. Read on for an excerpt. 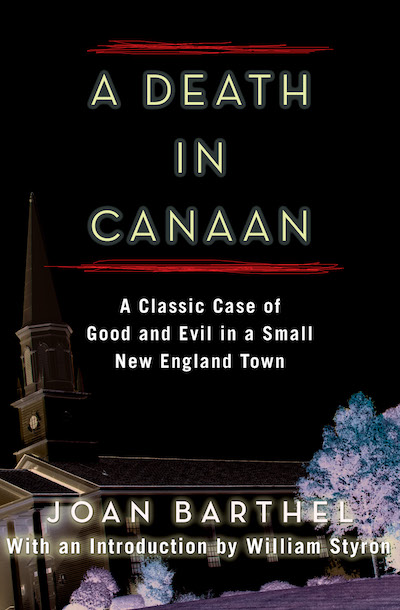 When the phone rang, Marion was close enough that she could reach out her hand and pick it up, still watching the TV screen. One of Kelley’s men had just jumped up on the tank and yelled to his buddies that he wanted to go with them across the river to get the gold.

Geoffrey had just come in from the Teen Center meeting. He had picked up a bag of chocolate chip cookies in the kitchen and was walking into the den, taking a bite, as Marion spoke.

“Your Mom sick, Peter?” the others heard her say. “You call your doctor, and we’ll be right there.”

Marion hung up quickly. “Peter says he needs the ambulance,” she said. “Something’s happened to his mother.” In the hallway between the den and the living room, Mickey was grabbing for his orange ambulance jacket with VFW in black letters on the back. Geoffrey dashed for the door. His car was out of gas, so he jumped into the little Toyota that belonged to their friend Fran Kaplan, a nurse. Marion, Mickey, and Fran took the Chevelle. By the time they got to the bottom of the hill, Geoffrey and the Toyota were out of sight.

Related: Guilt or Innocence: The Shocking Twists of the Sam Sheppard Case

At the four-way stop by the Arco station, Mickey made a quick left and drove faster. The ambulance was parked at Geer, the nursing home across from the VFW. When they got there the three of them jumped out of the car and ran to the ambulance. Within seconds they were back on Route 7, heading south.

Peter stood at the edge of the road, waiting. It was very dark. The floodlights that Barbara used to read by, at the corners of the house, were turned off. Peter hadn’t turned them on because the switch was in the closet, in the rear room. He didn’t want to go through the bedroom, so he waited in the dark. The gas station across the road was closed. The night was thick and black as Peter strained to see.

Then he saw the headlights of the Toyota, pinpoints of light that grew rounder and brighter as the little car hurtled down the long straight stretch of road. Geoffrey braked sharply and leaped out. He ran over to Peter.

“Where is she?” Geoff asked.

Want more true crime books? Sign up for The Lineup's newsletter, and get the creepiest books delivered straight to your inbox.

Geoff ran toward the house, with Peter just behind him. Geoff didn’t wait at the door. He raced right in, into the living room, to the bedroom door. Then he stopped.

Barbara lay sprawled on the floor, a pool of blood around her neck. Her short black curly hair was soggy with blood. Her throat had been slashed and her vocal cords hung out. She was nearly beheaded.

In the light from the clamp-on reading lamp, Barbara’s body shone whitely, the blood glaring around her. There were gaping cuts in her stomach. Three of her ribs were broken, and both her thighbones were broken too. Her legs were spread apart; she was nude. Her blue jeans and underpants lay beside her body, soaking wet. Barbara’s left arm was lying flat, but her right arm was bent at the elbow, in an upraised position. Her right fist was clenched. Her nose was broken. Her eyes were blackened and staring open.

Geoff stared at Barbara. He turned and stared at Peter.

Peter looked blankly at Geoff. “Well, come on then,” Peter said after a moment, his voice tight. “Let’s go outside.”

In the ambulance, Mickey was trying to get Sharon Hospital, but he couldn’t get through, so he called Canaan barracks. They said they had sent the Falls Village ambulance as a backup and had dispatched a trooper.

Mickey swerved a little to let the approaching cruiser whiz by him, then speeded up, and pulled up to Peter’s house just behind the trooper.

Bruce McCafferty, curly haired, blue-eyed, and boyish, the prototypical rookie cop, just ten months on the force, was working the four to midnight shift. He’d been traveling Route 44 near Furnace Hill Road, doing routine highway patrol, when he got the radio call from Trooper John Calkins at the barracks, who’d just heard from Sharon Hospital. The police got the call from the hospital at 9:58 P.M.

When the blue police car with its flashing lights came into view, Peter began jumping up and down, waving, motioning it into the yard. Trooper McCafferty got out and ran over to Peter and Geoffrey.

“Where is she?” McCafferty asked.

“She’s in the bedroom,” Peter said.

McCafferty hurried into the house. He knelt on one knee beside Barbara and felt her left wrist for a pulse, but couldn’t find it. He went out to the car and radioed the barracks, to ask his supervisor to come. Then, as though he could not be sure of so dreadful a sight, he went back into the house. He looked at Barbara again, then he came outside and made a second radio call to the barracks.

“I have a possible one twenty-five,” McCafferty said, giving the code number for a homicide.

“Are you kidding?” the other voice said. “Then you better seal off the house.”

Peter and Geoffrey were pushing furniture around in the living room, making a path for the stretcher. One of them had knocked over the little portable heater. When McCafferty came back in, he told them to stop. Peter looked at him, then went over near the kitchen, as far away from the bedroom door as he could get. He sat on a chair at the edge of the kitchen doorway, near the kitchen cabinet with the brown leather pouch hanging from its side. There were three or four knives in the pouch, including a knife that Wayne Collier, one of Peter’s friends, had given Barbara when she had complained that she didn’t have a really good carving knife. That knife was in the pouch now, with part of the handle sticking out. The knife had a six-inch blade, or a little less, because its tip had been broken off.

Mickey came into the bedroom, knelt down, and felt for a pulse. Fran Kaplan felt for a pulse too. Then Mickey went out to the ambulance to get a blanket to put over Barbara.

From the doorway to the bedroom, Marion looked at Barbara, but she didn’t go in. She could see blood spattered around the room, on some freshly ironed shirts hanging on the curtain rod. A green chair with brown wooden legs, in the corner of the bedroom, was spotted with blood. There was a gray steel tool chest near Barbara’s foot. The back door was standing partly open.

Want more true crime books? Sign up for The Lineup's newsletter, and get the creepiest books delivered straight to your inbox.

Barbara lay flung across the floor, her feet pointing toward the doorway where Marion stood. Her head was turned toward her left. Her nose was pushed to one side; blood had oozed out of the nostrils and from her mouth. Marion noticed that the soles of her feet were filthy.

She turned away then and saw Peter sitting on the chair, near the kitchen. He was shivering. She went over and put her arms around him.

Peter looked up at Marion.

“Can I come home with you?” he asked.

“Did I do the right thing?” Peter asked.

Peter wasn’t wearing a jacket, only his long-sleeved brown knit shirt. He was still shivering and Marion asked Geoff to let Peter wear his coat. Geoff took off his beloved navy pea coat, the coat he wore nearly twelve months of the year, and Marion draped it around Peter’s shoulders.

At nine minutes past ten, McCafferty’s supervisor, Sgt. Percy Salley, arrived. He went into the bedroom and looked at Barbara, then he came back out into the living room, where Peter and Marion stood.

“Are you all right?” Sergeant Salley asked Peter.

Sergeant Salley told Peter to open his shirt and hold out his hands. He examined Peter’s chest and turned his hands over, the palms up, then down. Peter looked blank and, watching him, Marion realized that no one had told him his mother was dead.

Want to read more? Download A Death in Canaan.