This House Is Haunted: The Cursed Villa of Maisons-Laffitte

The restless spirit of an emperor's mistress refused to leave her sprawling mansion...

An eerie creak, the flutter of a curtain, a strange shadow gliding down the darkened hall...

Few scenarios send a chill down the spine quite like a haunted house. Perhaps it's the thought of sharing one's personal space with a wayward ghost that most unsettles us; after all, it's difficult to relax when you suspect someone—or something—is watching you throughout the night. Yet as famed paranormal investigator Hans Holzer argues, the spooky living arrangement can be just as upsetting for the haunted house's resident spirit.

Hans Holzer stands as one of history's most prominent paranormal experts. Born in Vienna, Austria in 1920 before emigrating to the United States in1938, Holzer went on to write over 140 books about ghosts and the occult world—securing his position as one of America's original ghost hunters. In This House Is Haunted, Holzer travels to over eighty haunted houses across the globe, dissecting their history and venturing inside to speculate on the reasons why each ghostly inhabitant continues to stay in their earthly abode.

In the following excerpt, Holzer explores a villa in Maisons-Laffitte, due northwest of Paris. At first glance, the abode radiates old-world luxury and charm. But as Holzer soon discovers, a supernatural presence haunts the grounds, one that refuses to go quietly into the night.

Read on for a chilling excerpt from This House Is Haunted.

This House Is Haunted 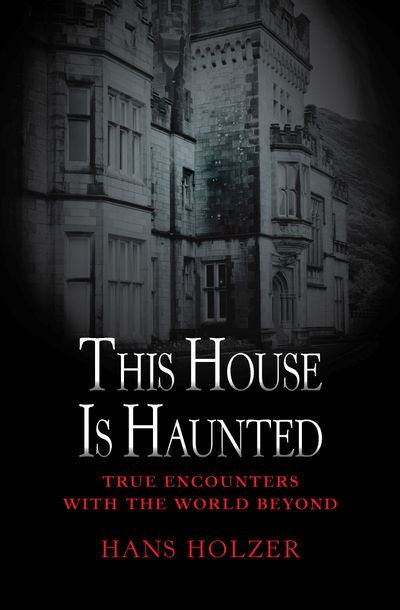 On the corner of rue Racine and avenue Montaigne there stands a three-story residence within about an acre of landscaped grounds.

When I visited the house it was exactly as it had been since it was built during the Second Empire, in the 1860s. A glass-enclosed conservatory faced toward the garden and a tower reached up beyond the roof in the romantic Victorian manner of the period. The only new addition was a low-ceilinged projection room on the other end of the garden: the last tenant had been motion picture personality Robert Lamoureux.

Inside the house, the appearance of an elegant town-house in the country was further maintained by the presence of high ceilings, white walls, gold appliances, and wrought-iron staircases in the front and rear.

No. 3 avenue Montaigne was built by Emperor Napoleon III for his own account. Ostensibly a hunting lodge (Maisons-Laffitte was then still rural), in reality it housed a favorite mistress, whose portrait the Emperor had had painted and placed on the outside wall.

With the advent of the Republic, the house became state property and was maintained as a “Residence of State” until World War II. Important visitors—but not those important enough to be housed in the Elysée Palace—were lodged there. During World War II German soldiers occupied the house and, in the process, looted it of anything that was not nailed down. When Allied troops took over the property, they completed the job. Subsequently it was purchased by Mr. DuPrès, a gentleman interested in real estate. When Madame DuPrès saw the house, she had him take it off the market and moved in with their family.

In the fall of 1949, Mr. and Mrs. DuPrès rented it for their own use. Mr. DuPrès was a high-ranking diplomat at the American Embassy in Paris. Mrs. DuPrès, Pennsylvania-born, was of English, Welsh, and Irish descent and was born with a caul, a fact some people regard as a sign of psychic talents. She and Mr. DuPrès have four children and now live near Washington, D.C., where Mr. DuPrès practices law.

When the DuPrès family rented the house, they also took over the services of Paulette, the “bonne-à-tout-faire” who had been with the family for many years. The house had meanwhile been tastefully refurnished and the appointments included a fine grand piano in the “salon,” the large downstairs reception room where the lady in Napoleon’s life presumably met her illustrious lover whenever he visited her.

Mrs. DuPrès liked the house from the start; but she could not help wondering about the oval portrait of the lovely lady attached to the wall of the tower.

Shortly after moving to the house, Mr. DuPrès had to travel for three weeks on government business. Mrs. DuPrès was left with her children, Paulette the maid, and a nurse-maid—neither of whom spoke a word of English. Mrs. DuPrès’ French was then almost nonexistent, so she looked forward to a somewhat unusual relationship with her servants.

Related: Her Touch Was as Cold as Ice: A True Ghost Encounter in a Forsaken Sanatorium

Several nights after her husband’s departure, Mrs. DuPrès was awakened at 3:00 A.M. by the sound of music. It was a rambling but lovely piano piece being played somewhere nearby. Her first reaction was how inconsiderate the neighbors were to make music at such an hour, until she realized that she had no neighbors near enough to hear anything. It then struck her that the music came from inside her house, or, to be specific, from the salon downstairs. She rushed to the bathroom and sat down on an ice-cold bathtub to make sure she was awake. An hour later the playing stopped. During that hour she was much too scared to go down and see who was playing her piano. The music had not been particularly macabre, but rather more on the pleasant side and somewhat rambling.

Who was she to discuss her experience with? The Embassy staff would hardly react favorably to such matters and her French did not permit her to question the servants.

The next night, the ghostly piano music came on again, promptly at 3:00 A.M., and stopped just as promptly at 4:00 A.M. Night after night, she was being treated to a concert by unseen hands. Mrs. DuPrès still would not venture downstairs at the time of the spooky goings-on, but prior to retiring she tried to set traps for her unknown visitor, such as closing the piano lid or leaving sheet music open at certain pages. But the ghost did not respond: everything was exactly as she had left it, and the music was as clear as ever.

Related: Haunted People: She Was Stalked by the Menacing Spirit of a Former Flame

After the DuPrès family left Paris, the house passed into the hands of Robert Lamoureux, who added the projection room on the grounds but left everything else as it was.

He, too, gave up the house and eventually moved elsewhere. The house then became part of a real estate parcel acquired by speculators for the purpose of tearing down the old houses and erecting a new apartment house on the spot. In August 1968, I was granted permission by the La Tour Malakoff Society to visit the house, with the tense suggestion that I do so as soon as possible if I wanted to find the house still standing.

Related: 11 Best Ghost Story Podcasts to Send a Chill Down Your Spine

Finally, in 1969, I did so, and fortunately the wreckers had not yet come. The house already showed its state of abandonment. The once carefully kept garden was overgrown with weeds, the windows were dirty and the absence of all furniture gave it an eerie, unreal feeling.