Haunted People: She Was Stalked by the Menacing Spirit of a Former Flame

Mrs. G bought a Ouija board for fun ... but ended up unleashing a possessive spirit intent on controlling her life.

Over 50 years after publishing his first book about the spirit world, preeminent paranormal investigator Hans Holzer remains one of history's greatest ghost hunters. Born in Vienna, Austria in January 1920, Holzer and his family moved to New York City in 1938. There, Holzer enrolled at Columbia University and soon launched his career as a parapsychologist and paranormal investigator.

Holzer would go on to pen more than 140 books about ghosts and the occult; he appeared on Leonard Nimoy's In Search Of and investigated notorious hauntings like the Amityville Horror house of Amityville, New York. Yet Holzer was equally adept at unearthing lesser-known cases of paranormal activity, real-life tales of everyday people and their face-to-face encounters with the other side. Many of these case studies and reports appear in Holzer's published work. In Haunted People, Holzer collects true stories of individuals touched by the paranormal and explores the frightening phenomenon of possession: when a ghost is not yet ready to pass on to the next stage and instead clings to a living host. Throughout its pages are chilling reports of such paranormal activity, including some of the eeriest recorded cases of supernatural possession.

In the chilling excerpt below, a woman known as Mrs. G. grows curious about the spirit world and purchases a Ouija board. it's all fun and games at first. Soon, however, Mrs. G. senses she's not alone. The ghost of a former flame returns, and reveals itself to be a menacing entity intent on controlling her life. Mrs. G tries to reassure herself she’s merely imagining things—but the truth is far more terrifying.

Read on for an excerpt of Haunted People by Hans Holzer and then download the book! 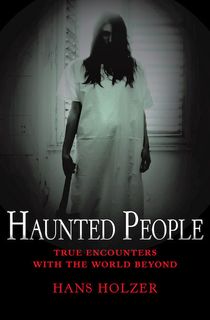 If you live in Kansas City, you’re bound to hear about the devil now and again if you are a Bible student or church-goer in a church that goes in for the hell-and-brimstone variety of preaching. To some people the devil is real and they will give you an argument filled with fervor and Bible quotations to prove that he exists.

Mrs. G. wasn’t one of those who were impressed by demonic outbursts, however, and could not care less whether there was a devil or not. She had more time than ever on her hands and the idea of “playing around” with the Ouija board tickled her fancy. Consequently she bought a board the following week and decided she would try it whenever she had a moment all to herself.

That moment came a few days later, when she was all by herself in the house. She placed her fingers lightly on the indicator. Mrs. G. was positive that only her own muscle power could move the indicator but she was willing to be amused that afternoon and, so to speak, game for whatever might come through the board …

She gasped and let the pencil drop. John W. had worshipped her before she was married. Unfortunately, she had not been able to return the feeling with the same intensity. Ultimately, they lost track of each other and in 30 years never saw each other again …

Could it be? She wondered. She put the board away in haste. Enough for now, she thought.

But then her curiosity made her try it again. As if by magic, the indicator flew over the board.

Related: 10 Paranormal Books You Haven’t Read Yet (But Should)

“I want to be with you, always,” the board spelled out now. And then an avalanche of words followed, all of them directed towards her and telling her how much he had always loved and wanted her … every day, practically, she found herself drawn to the Ouija board. For hours, she would listen to the alleged John W. tell her how much he wanted to stay with her, now that he had found her again.

This was punctuated with bitter complaints that she had hurt him, that she had not understood his great devotion for her.

As the weeks went by, her own personality changed and she began to take on more and more of his characteristic moods. Whereas she had been a light-hearted, gay person, she turned moody and morbid and her husband could not fail to notice the change that had come over his wife … by the winter of 1964, her life was no longer her own. In addition to the frequent Ouija board sessions, she now began to hear the man’s voice directly.

“I am with you,” he explained, fervently, and with her he was. There was never a moment where she could be sure he was not nearby. Her privacy was gone. She kept hearing his voice, sad, but nevertheless his voice as it had been in life, talking to her from somewhere outside, and yet seemingly inside her head at the same time. She could not understand any of this and she did not know how to cope with it at first.

She threw away the accursed Ouija board that had opened the floodgates to the invasion from the beyond. But it did not help much. He was there, always present, and he could communicate with her through her own psychic sense. She found it difficult to fall asleep. About that time she noticed she was no longer alone in bed. At first she thought it was her imagination, spurred on by fear, that made her think the undesired one was with her. But she soon felt his physical presence close to her body.

Related: Her Touch Was as Cold as Ice: A True Ghost Encounter in a Forsaken Sanatorium

One night she extended her hand and clearly felt something other than air above her own body! She let out a scream and turned on the light. But this merely woke her husband and she had to explain it as a bad dream, so that he would not be alarmed.

Night after night, she felt John W.’s ethereal body next to or on top of hers. There was no mistake about it. He was trying to make love to her from the shadowy world he was in, something he had been denied while in the flesh. She fought off his advances as best she could, but it did not deter him in the least …

Nothing mattered in her life but to rid herself of this nightmare and return to the placid life she had been leading prior to the incident with the Ouija board.

“You will always hear my voice. You won’t be able to get rid of me now.”

John W. added threats and intimidation to his arsenal of evil now. Threats as to what he would do to her and her husband, if she did not accept him willingly. Ultimately, she could not bear it any longer and decided to inform her husband of what she was going through.

At first she was fearful as to what he might say. Perhaps he would have her committed to an institution, or at best, subject her to the humiliating treatments of a private psychiatrist.

But her husband listened quietly and with compassion.

“Terrible,” he finally commented, “we’ve got to get you out of this somehow.”

She sighed with relief. He evidently believed her. She herself had moments now where she questioned her own sanity. Could such things be as the sexual invasion of a woman by a dead man? Was she not merely acting out her own suppressed desires due perhaps to middle-age change of life?

She went to seek the advice of a physician.

After a careful checkup, he found her physically sound but suggested a psychiatric examination and possibly an EEG—an electroencephalogram to determine brain damage, if any. None of these tests showed anything abnormal. After a while, she concluded that medicine men could not help her even if they should believe her story.

“You will always hear my voice,” he promised her night and day, “You won’t be able to get rid of me now.”