Her Touch Was as Cold as Ice: A True Ghost Encounter in a Forsaken Sanatorium

"The voice sounded close, yet at the same time, so far away. It was the most pitiful and horrifying cry I had ever heard."

It is rare to experience paranormal phenomenon, and it is even rarer to experience it multiple times in the same location. I am one of the fortunate few to hold that distinction.

It happened in an old, abandoned tuberculosis sanatorium. The dark hallways and the rooms frozen in time from a primitive medical era were enough to put hackles on any man’s neck. However, to know that you were not alone in that darkness took it to a completely new level of fear.

The first time I was at this location, we picked up the image of a little girl on a FLIR (Forward Looking Infrared Radiometer) thermal camera. She was just dancing in the hallway. According to the camera, her temperature was much lower than the air’s. Several of us walked out to where she was and experienced extreme cold when we passed through her. After several minutes of observation, she vanished through a wall.

Fast forward about four months; we travelled back to the sanatorium. I was with a group in the exact same location in the hallway doing an EVP (electronic voice phenomenon) session. We didn’t see or hear anything, but the next morning I received the shock of my life. We picked up the sound of a little girl singing and moving around. At the end of the recording you could hear her call playfully, “I’m down in this room.”

(Listen to the recording below.)

Six months later, our group returned to the sanatorium for a joint investigation with a group from Texas. We arrived at the sanatorium and unloaded our equipment. Soon after that, we received a call from the Texas group saying they were lost. The three other members of our group drove into town to meet the others and lead them out to the site. As the technical manager, I was designated to stay behind and watch the equipment. I was not completely comfortable with this idea, but I was not going to be a sissy so I agreed.

The equipment was in one of the few rooms with power in the building. It also happened to be directly below the floor where we had experienced the little girl. There was a dark stairwell right beside the door to the conference room. It led to the dusty, pitch-black floors above. The others had been gone about 10 minutes when I heard a scream of agony come from above me. I froze, listening, and then slowly walked to the door.

Related: 5 Real-Life Ghost Stories That Will Make You Question Your Sanity

The instant I stepped into the hallway, I heard it again. To describe with words is very difficult to do. The voice sounded close, yet at the same time, so far away. It was the most pitiful and horrifying cry I had ever heard. The voice was female, but that’s all I could tell. It could have been a little girl or it could have been a grown woman. The incredible agony in the voice masked the age. I retreated into the room and awaited the return of the others with a hammering heart. It was the longest 30 minutes of my life.

Later that same evening, I was leading a group on an investigation of the building. We were on the same floor where the other occurrences happened. I carried the thermal camera as we hoped to catch a glimpse of the little girl again. Everyone assembled in a semi-circle in front of me so they could see the screen.

We had not stopped for long when I felt someone grab my elbow from behind, yanking me backwards. I knew everyone in my group was in front, so my first assumption was that someone else had snuck up beside me to play a prank. When I turned, however, I realized that no one was there.

Related: The Greenbrier Ghost: The Spirit Who Solved Her Own Murder

I had the sudden realization that my elbow was numb with cold. It was as if I had stuck it in a deep freeze. We quickly retreated to the equipment room where my elbow was analyzed with the thermal camera. It was 15 degrees colder than the rest of my arm.

I had a few other experiences in my tenure as a paranormal researcher, but none so compelling as the sanatorium. Afterward, I started considering possibilities on a much more personal level. Could someone be right beside us, watching and observing, trying to interact? Do the dead remain here with us? These experiences inspired me to write my paranormal thriller The Tesla Gate, which explores these questions. 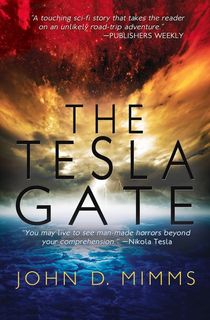 John D. Mimms is a business owner, paranormal researcher, and author. John served as the technical director for a TAPS (The Atlantic Paranormal Society) family research group in Arkansas, supervising over 100 investigations. He also wrote more than 16 technical articles and a definitive technical/training manual-a comprehensive guide on equipment usage, investigation protocol, and scientific theory for paranormal research. His novel, The Tesla Gate is out now. More information about Mimms and his writing can be found on johndmimmsauthor.com.