Beware the Doll-Master and His Terrifying Collection

Madness, obsession, a compulsion to kill: Joyce Carol Oates is no stranger to the dark side of human nature. In The Doll-Master: And Other Tales of Terror, the celebrated author delivers six short stories of menace and dread. Expertly crafted, each tale is sure to keep you reading long into the night.

The collection, which won a Bram Stoker Award in 2016, opens with a nightmarish narrative called “The Doll-Master”. In it, a troubled boy is obsessed with his cousin Amy’s beloved baby-doll. When death strikes the family, the boy sets out collecting his own found dolls, snatching them from the porches and backyards of nearby residences and slipping away to his family's home on Prospect Hill. But just what kind of collection has he amassed over the years? Each found doll possesses its own sinister significance—and each is hidden away in the decrepit carriage house on his family's property.

In the excerpt below, the young narrator of “The Doll-Master” pays a nighttime visit to his twisted collection.

Read on for an excerpt of The Doll-Master: And Other Tales of Terror, and then download the book. 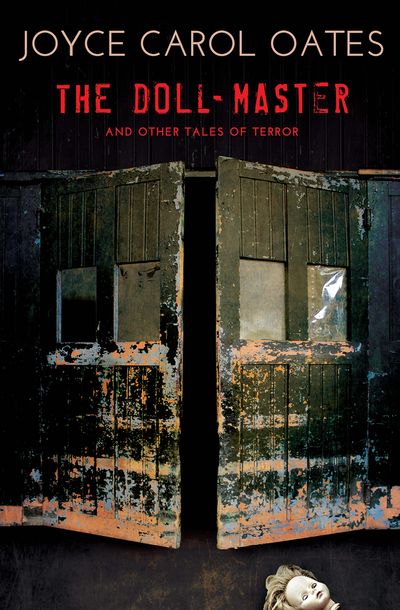 After high school it was decided that I would “defer” college. My grades had been high, especially in physics and calculus, and at graduation my name had been asterisked in the commencement program to indicate summa cum laude but I had not gotten around to applying for any college or university. My teachers and the school guidance counselor were perplexed by this decision but my mother understood, to a degree. For my father had departed from the house on Prospect Hill and you might think that a concerned son would not leave his mother alone in such a large house, at such a time.

Only I knew, I could not leave my found dolls.

I could not risk strangers finding them. The possibility of the found dolls being discovered was too terrible to consider.

Often when I couldn’t sleep, I took a flashlight and went out into the carriage house. By moonlight the carriage house seemed to float like a ghost ship on a dark sea and all was still except for the cries of nocturnal birds and, in summer, a raucous sound of nocturnal insects buzzing and humming like insidious thoughts.

The found dolls lay quiet in their makeshift cribs of plywood and hay. They had been placed side by side like sisters though each doll was quite distinct from the others and might have made a claim for being the most beautiful.

Barbie was one of that notorious breed—Barbie Dolls.

In this case, Bride Barbie. For the angelic blond girl-doll wore a white silk gown that shimmered and shook when you lifted her and on her flawless head a lace veil. Her figure was not a child’s figure but that of a miniature but mature woman with pronounced breasts straining against the bodice of the wedding dress, a ridiculously narrow waist, and shapely hips.

My Friend had observed One of these will do. We should give Barbie a chance.

Barbie had given me the most difficulty, in fact. You would not think that a doll so small and weighing so little could scream so loud and that her fingernails, shaped and polished and very sharp, could inflict such damage on my bare forearms.

If she doesn’t obey, you can chop her into pieces. Tell her she’s on trial for her life.

In her makeshift crib of plywood and hay Barbie lay motionless as if in a trance of great surprise and great loathing. Not ever would Barbie cast a sidelong glance at her sister-doll beside her, a soft boneless cloth doll with a startlingly pale, pretty face and a little tiara on her platinum blond curls sparking with tiny rhinestones.

Want more terrifying books? Sign up for The Lineup's newsletter, and get horrifying recommendations delivered straight to your inbox.

Evangeline had come from Juniper Court, a trailer-village on the outskirts of our town. Hardly protesting Evangeline had come with me at my Friend’s suggestion for she was a doll lacking a substantial body; her head was made of some synthetic material like plastic, or a combination of plastic and ceramic, but her body was boneless, like a sock puppet. She could not put up much of a struggle and seemed almost to fall before me in a swoon of abnegation, as a sock puppet might do for whom the only possible life is generated by another’s antic hand.

No one had searched for Evangeline. It was believed that Evangeline was a runaway like other children in her family and in Juniper Court.

When I left the dolls I covered them beneath a khaki-colored canvas, neatly.

This khaki-colored canvas was the cleanest covering I could find in the carriage house.

Many items of furniture and other abandoned and forgotten things in the carriage house were covered with pieces of canvas that were soiled and discolored, but the covering for the found dolls was reasonably clean.

I would have drawn quilts over them, to keep them warm, but I worried that someone would notice, and become suspicious.

My Friend said They’re happy here. They’re at peace here. This is the best they’ve been treated in their short tragic lives.

One night not long after I’d stopped seeing Dr. G., I heard a sound at the entrance to the stable, like a footfall, and shone my light there thinking in dismay Mother! I will have to kill her . . .

But there was no one there and when I returned to the house it was darkened as before.

I was relieved, I think. For it would not be an easy or pleasant matter to subdue, silence, and suffocate Mother, so much larger than any of the found dolls.

Most nights Mother slept deeply. I think Mother was heavily medicated. Sometimes I stood in the doorway of Mother’s room seeing her motionless mannequin-figure by moonlight beneath the bedclothes of the large canopied bed and listening to her rhythmic breathing which sometimes shaded into a soft snoring that was a comfort to me. For when Mother was awake, and in my presence, always Mother was aware of me, and looking at me; always Mother was addressing me, or asking me a question, waiting then for me to reply when I had no reply for her.

Though I only murmured or grunted responses, and avoided looking Mother in the face, Mother was never discouraged and continued to chatter in my presence as if she were thinking aloud and yet at the same time addressing me.

My Friend laid a sympathetic hand on my shoulder. It was the first time that my Friend had appeared inside my house.

You know that it would be better, Robbie, if the woman were silenced. But this is not a task for the lily-livered.

There was a sixth found doll—as it turned out, a disappointing one. But I could not have guessed so, beforehand.

Still, I kept Trixie with the others. Though sometimes I didn’t remove the canvas from her crib, for her sour curdled-milk pug-face and reproachful green marble eyes were discomforting to me; and her cheap sleazy silly costume, a low-cut sequined top that showed the cleavage of her breasts and a frilly frothy ballerina-skirt in matching turquoise, and spike-heeled little shoes, were frankly embarrassing.

No more of Trixie!

I will draw the khaki-covered canvas over Trixie—Voilà! As my Friend says.

Related: Obsessed: What If the Man You Fell for Was a Cold-Blooded Killer?

His name was an exotic name—Bharata.

He had taffy-colored skin of the finest rubber that so resembled human flesh, you shivered as your fingertips caressed his face and felt a semblance of warmth, as of capillaries close beneath the surface of the skin. And his eyes were not glassy-brown but a warm chocolate-brown.

And thick-lashed. Beautiful as any girl’s eyes.

Bharata wore chino shorts, a sky-blue T-shirt, blue sneakers on his small feet and no socks. His legs were well-formed with a look of small sinewy muscle, more defined than his sister-dolls’ legs.

My Friend said, You see, Robbie? You were prejudiced against boys but now, you have a surprise in store.

Bharata was one of the larger dolls, with a sweetly pretty boy-face and very black curly hair; his black eyelashes swept against his cheeks, which appeared to be lightly rouged. You could not have told if Bharata’s mouth was a boy-mouth, or a girl’s.

Bharata was the only doll who tried to speak in actual words, not merely soft squeaking sounds. Bharata’s mouth moved and I leaned to him, to listen, but heard only what sounded like Where—where is—who are you—I don’t want to be—don’t want to be h-here . . .

The other found dolls might have exhibited some jealousy, or envy, of my taffy-skinned found-boy-doll. But they disguised their emotions well for they knew their place and did not wish to offend me who was their Doll-Master.

It was my Friend who had told me, one day Robbie, you are the Doll-Master. You must never surrender your authority.

Want to keep reading? Download The Doll-Master: And Other Tales of Terror now.