Claus Von Bülow: The Danish-British Socialite Who Was Convicted and then Cleared of Trying to Murder His Wife

Bad tidings bring the holidays to a halt when a Danish-British socialite is suspected of attempting to murder his wife. Twice.

In late-May 2019, news broke that socialite Claus Von Bülow had died at his London home at the age of 92. Word of his death revived interest in the man's deeply troubling past: in two trials, the Danish-born society figure was convicted and later acquitted of trying to murder his heiress wife.

The chilling case traces back to December 1980 in the days leading up to Christmas. The Von Bülow family resided in a palatial estate in Newport, Rhode Island. Yet the holidays were the farthest thing from anyone's mind. Instead, they were focused on matriarch Sunny Von Bülow's sudden decline in health—and its eerie resemblance to an episode from 1979.

Claus Von Bülow was a socialite of Danish and German descent who married American heiress Martha Crawford, known as Sunny. Their union was anything but happy: They talked openly of divorce, and Claus even took a mistress. So when Sunny overdosed on insulin the day after Christmas in 1979 and then slipped into a coma, those close to the family suspected that it was Claus who inserted the syringe.

Sunny eventually recovered from her harrowing ordeal... but not for long.

Almost exactly one year later, the Von Bülows found themselves reliving the horrors of Christmas past: the family maid discovered Sunny passed out and unresponsive at home. She was rushed to the hospital, where she fell into yet another vegetative state. Only this time, Sunny never woke up.

Suspicion once again fell on Claus. In 1982, he went on trial for the attempted murder of his wife—igniting a legal firestorm that would last for years.

New York Times bestselling author William Wright dives into this high-profile case in The Von Bülow Affair. Thoroughly researched and delivered with an objective eye, Wright cites court transcripts and revealing first-person interviews to produce an objective, behind-the-scenes account of the “scandal of the decade” and the high-society man who was eventually set free after being found guilty of attempting to murder his wife.

Read on for an excerpt of The Von Bülow Affair, and then download the book. 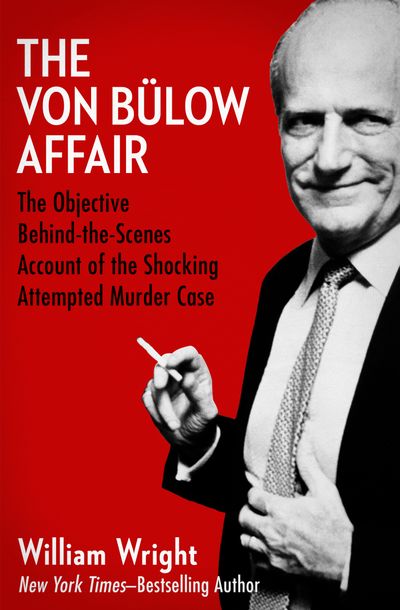 One evening late in December, Alexander was speaking with his mother on the phone from Providence. He noticed that her speech was becoming thick and weak—just as it had the previous Christmas before she went into a coma. He asked if she had taken a sleeping pill. She said no. As the speech distortion grew more pronounced, Alexander asked several more times if she was sure she hadn’t taken something. Each time he got a firm denial.

Alexander was perplexed. Again he ruled out liquor, since she rarely drank, and on the few occasions when she did, she showed symptoms, but not this odd speech. What made it particularly worrying to Alexander was that on several occasions since the previous Christmas he had noticed the strange difficulty in speaking, but never during previous years.

But if Alexander was concerned about his mother, it was the sporadic concern of a pleasure-bent college student. With Ala in Europe most of the time and Mrs. Aitken in bad health herself, the only one constantly concerned about Sunny was Maria Schrallhammer. Maria wrote a letter to a friend that summarized the ominous situation in the Von Bülow household and Maria’s most gothic fears:

Unfortunately not everything is rosy here.… Monday night at about 11 P.M. Mr. Bülow came to my room and told me something had happened, but it was nothing bad. As I entered the bedroom, Mrs. was laying on the bed covered with blood, with an injury on the back of her head. On the carpet also bloodstain and a towel soaked with blood. He already had called the ambulance which arrived very shortly. Mrs. Bülow was in a complete daze and mumbled some words you could not understand. They took her to Lenox Hill Hospital two blocks away and next day transferred her to the Medical Center. There she regained consciousness and could recall nothing. She was till Thursday under intensive care with poisoning symptoms and very, very weak. She is feeling better. Her husband said she fell and injured herself.

Last December 27 I found her unconscious in a bedroom at Newport. I went to my room after my boss told me that Mrs. had a throat ache and would not get up. He told me specifically that I don’t have to come. As I stood in front of the locked door I heard her moaning. Determined, I knocked on the door and went in. He lay next to her and tried to convince me that she was asleep. It went on all day. He refused to call a doctor and she sank deeper in her coma. At 6 P.M. I held her groaning in my arms as the doctor finally came through the door.

Related: ‘Tis the Season for Murder: 17 Winter True Crime Books That Will Give You the Chills

My God, was that a relief. She literally was rescued from death. With an ambulance from the Fire Department she was taken to a hospital. Thank God she recovered slowly. They found out that her blood sugar level was very low. At least a plus for him.

I found that her condition in February was very peculiar. I went secretly to Mrs. Aitken and told her the truth. Bülow and I are at daggers’ points. In April Mrs. Bülow spent almost two weeks at the Medical Center for tests. They diagnosed that her blood sugar was unstable. But at the hospital she was feeling rather well. Sometimes I get sick thinking what is going to happen next. Mrs. trusts her husband blindly and is totally dependent. He of course has a girlfriend. The whole life has changed. No more parties, and they don’t go out either. She gained a lot of weight and is very unhappy about it.

A few days before Claus Von Bülow was to drive to Newport for a pre-Christmas weekend with Sunny, Alexandra Isles invited him to a carol service in which her son Adam was playing in the orchestra. Afterwards, Von Bülow returned to Alexandra’s apartment for dinner. The evening was a typical Alexandra mockup of family life. A day or two later he was with Alexandra at a dinner party given by friends, which suggests how far they had progressed as an open couple.

Still, relations between Claus and Alexandra were not fully repaired. The Watergate coffee shop declarations had not succeeded in mollifying her. For the opening of the play she was working on in Washington, she received a telegram from Von Bülow: “Break a leg, break a heart.” This was followed by a note from him saying that Sunny had been hospitalized with an aspirin overdose; it’s effect was to drive Alexandra back into her old fears that her affair was causing Sunny’s health crises.

Related: The Case of Michael Peterson—a Perfect Husband, or the Staircase Murderer?

Since this had once before caused a rift in their affair, it seems odd Von Bülow felt obliged to keep Alexandra, with whom he was now having such spotty communications, so well informed about Sunny’s difficulties.

Christmas softened Alexandra’s heart, however, resulting in two conciliatory gestures: the invitation to the carol service and two Christmas presents for Von Bülow, which she dropped off at 960 Fifth Avenue. Inside the package was one gift-wrapped present to which she had affixed a cut-out heart torn in half but crudely rejoined with a Band-Aid; the other present had the recklessly indiscreet inscription “To my favorite manic depressive.” Alexandra would later characterize these gifts as “a peace offering.”

Nevertheless, the affair, which for a good part of its two-year duration had been tormented, now seemed to be at its most agonized. Each of Alexandra’s actions suggest her pain and confusion. How much longer could Claus Von Bülow hold in abeyance this woman who had already been heroically patient and forgiving?

It was in an anguished state of mind that Claus Von Bulow prepared to climb into the Mercedes with Sunny and Cosima to drive to Newport For a family holiday weekend. (Alexander would come down from Providence.) Because Mrs. Aitken was ill and had to remain in her apartment, the plan was to spend the weekend of December 20 and 21 at Clarendon Court and then return to New York for Christmas dinner with the Aitkens.

Just before leaving, Sunny phoned Isabel Glover at her antique store on Manhattan’s 57th Street. Sunny seemed in a mood to talk about herself; this happened so rarely that Isabel took the time from a working morning to chat with her old friend.

Sunny was preoccupied with her erratic health; she wished she could find out what was wrong with her, she told Isabel. On one point Sunny was emphatic: she would not return to a hospital. During her treatment for aspirin toxicity earlier in the month, nurses had had trouble finding Sunny’s veins and “those needles hurt.” In talking about this conversation later, Isabel said, “Sunny was very stoic. If she said the needles hurt, they must have been excruciating.”

Isabel went on to say that Sunny never leaned on her friends; if something was bothering her, she invariably kept it to herself. She never mentioned to Isabel, for instance, that she was contemplating divorce. “But in that case,” Isabel added, “she didn’t have to. It was obvious something was wrong.”

Related: Guilt or Innocence: The Shocking Twists of the Sam Sheppard Case

Maria was to have accompanied the family for the Newport weekend, but at the last minute Von Bülow urged that she stay behind. Maria was overworked, he said; if she went up to Newport, she “would just catch flu again.” Sunny, who had asked Maria to come, agreed it was a good idea to give Maria a few days off.

As Maria was helping her employers get off, she took some of their bags down in the elevator. Among them was Von Bülow’s customary open satchel, this one a white canvas bag that had METROPOLITAN OPERA printed on it. Among the items inside, Maria spotted the black bag. She opened it and saw that it contained the syringes and vials, among them the one marked INSULIN. Alarming as this was, Maria tried to allay her fears by telling herself he wouldn’t dare try to do it again.

The day after the Von Bülows arrived in Newport—Saturday, December 20, 1980—would be Sunny’s last day of consciousness.