The Case of Michael Peterson—a Perfect Husband, or the Staircase Murderer?

Michael Peterson and his second wife, Kathleen, seemed to lead a normal life. With five kids, a mansion, and successful careers—Michael, a writer; Kathleen, a business executive—no one thought they'd become the subjects of one of the most baffling true crime cases in recent memory: the Staircase Murders.

In the early hours of December 9, 2001, Kathleen Peterson allegedly fell down a staircase in her home, and then died on the first floor landing. In the ensuing months, damning discrepancies arose between Michael's story and the evidence found during the investigation. The amount of blood at the scene was inconsistent with what an "accident" might produce; the confirmed time of death contradicted Michael's initial claims to the 9-1-1 operator. Moreover, police uncovered proof of extramarital dalliances—plus the family's close connection to a similarly fatal stairway fall. These discoveries seemed to point towards murder, and one culprit: Michael Peterson himself.

In A Perfect Husband, Aphrodite Jones examines the case, which led to the legal battle that became one of the longest in North Carolina history. The following excerpt recounts the original night of the incident, including Michael’s suspicious 9-1-1 call...Is Michael covering up his role in Kathleen's death? Or is his shock genuine, and an indication that it was in fact an accident?

Reach your own verdict by reading the excerpt of A Perfect Husband below, and the download the book. 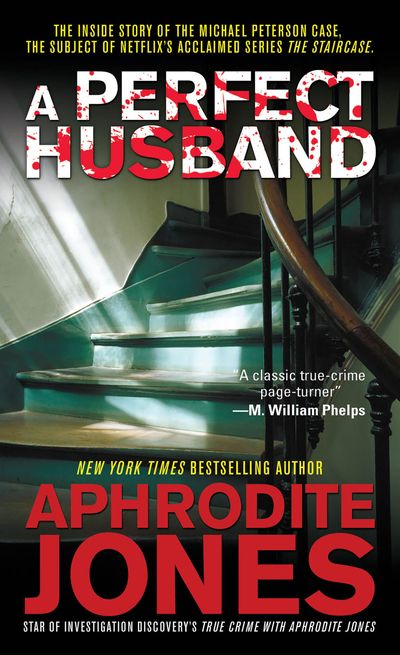 On December 9, 2001, just after 2:40 in the morning, a frantic man dialed a 9-1-1 operator to report an emergency. The caller was breathing heavily as he told a Durham, North Carolina, emergency operator that his wife had an accident at their Cedar Street home. The caller was bordering on hysteria. His wife, he said, had fallen down the stairs. She had an accident, he reported, his wife was not conscious . . . but she was still breathing.”

“The caller seemed confused. He kept repeating that his wife wasn’t conscious. He wanted an emergency crew to come over immediately. He had already given the address. But the operator wanted the man to calm down. She could hardly understand him, his voice was so shrill and his breathing so loud. The emergency operator assured him that an ambulance had already been dispatched, that she just wanted to ask him some questions.

9-1-1 Operator: Calm down, sir. Calm down. How many stairs did she fall down?

9-1-1 Operator: Sir, somebody else is dispatching the ambulance.

But the phone was going dead. The 9-1-1 operator could hear the caller in the background yelling, “Oh, God!” Then their connection was lost. The operator dialed Engine 5, Medic 5, to be sure that an emergency crew was enroute. She spoke directly to the rescue team, asking them to copy the address on Cedar Street. Then just as she was completing her radio call, repeating that an unconscious female had fallen down a flight of stairs, a second emergency 9-1-1 call came in.

Caller: Where are they? Why is she not breathing? Please! Please, would you hurry up!

The caller could hear static through the phone. There was the sound of radio operators and in the background someone yelling “Code 5!” With each passing second, the caller was getting more frantic. Time was standing still.

But the caller said nothing more.

The phone had gone dead again. All that was left was a dial tone.

Related: The Staircase: A True Crime Documentary That Surprises Even After It Ends

Eight minutes later, the paramedics, who had made a wrong turn in the wooded neighborhood, raced up the long driveway on Cedar Street. All the lights were on in the house. They rushed in and found the victim of the fall, a forty-eight-year-old white female, without any pulse. Durham Police Department Officers McDowell and Figueroa were the next to arrive on the scene. Within minutes, Corporal McDowell asked communications to notify the Crime Investigation Department. The emergency medical services team hadn’t even attempted to revive the woman’s heart beat; it was clear that the woman was deceased. Police at the scene tried to identify the male there, the person who made the 9-1-1 call, but the gentleman was so hysterical and upset, he was just crying out of control.

Officer Figueroa, who had arrived at 2:50 A.M., observed that the victim, Kathleen Hunt Atwater Peterson, lay at the bottom of the backstairs with her head tilted up against the stairwell. Beside her were a pair of male athletic shoes, white socks, and a pair of clear-gel flip-flop sandals. Under her head was a blood-soaked roll of paper towels.

At 3:07 A.M., Durham Investigator Dan George arrived and made his way around the fire trucks and patrol cars, approaching the back entryway to the residence. Investigator George deliberately walked through the back door, trying to stay clear of the victim. Dan George spoke with Officer Figueroa about securing the residence. It was such a huge place, they would need plenty of backup. He noted that there was blood on the walls and on several steps leading up the stairway and was assured that the Crime Investigation Department (CID) were on their way.

He didn’t want to stay long. He wanted to wait for the Crime Scene Investigation teams. Dan George felt there was foul play . . . and just as the police investigator began backing out of the doorway, the kitchen door opened and Michael Peterson, dressed in shorts and a T-shirt, running barefoot, came rushing past him. Peterson was covered in blood from head to toe.

The voice was Todd’s, coming from behind Michael. Todd was trying to console his dad. He was offering to check on Kathleen. Then, like lightning, Michael approached his wife, bent down over her, crying and moaning, and began to caress her. The officers present had no chance to prevent it.

It was awkward. The police needed to find a way to remove Michael Peterson from the body. Without being harsh, finally, after a few failed attempts, they decided to ask Todd, who somehow managed to move his dad away.

But the damage had been done.

The scene was contaminated.

Michael Peterson had transferred bloodstains from Kathleen’s body to his own.

And, as if that weren’t trouble enough, when Investigator Dan George accompanied Michael and Todd Peterson back toward the kitchen area, he was surprised to see a civilian standing there, a young lady whom he recognized. She was Christina Tomessetti, the daughter of one of his best friends, and he wondered what Christina was doing there, alone in the kitchen, just waiting by the sink. Christina told Dan George that she and Todd had been at a party, that they had arrived at the house just moments after the fire trucks had gotten there.

As the uniformed officers attempted to secure the scene, two other civilians suddenly appeared out of nowhere. They were Heather Whitson and Ben Maynard, other friends of Todd’s, whom he apparently had called for help. Todd knew they were in the neighborhood, all of them had just seen each other at the party, and Todd had specifically asked Ben to bring Heather, who was a medical resident at Duke University. Todd hoped Heather could be of some type of assistance, to his dad at least, if nothing else.

At first, when Heather and Ben had arrived on the scene, the Durham police were refusing to let them enter. But immediately, Todd appeared at the front Cedar Street entrance, asserting that it was okay for his friends to come in. He needed someone to check on his dad. Todd insisted, and he wouldn’t take no for an answer. The police, trying to walk on eggshells in the midst of such family grief, didn’t argue with Todd. They permitted his friends to enter.

Todd took his friends around the front entrance of the house, around the spiral staircase. The three walked into the kitchen through the formal dining room, and once there, Heather and Ben tried to console Mr. Peterson. But the man was so distraught over the loss of his wife, there was nothing they could do or say. He was all bloody, but he didn’t really need any medical attention. He was just in shock.

Peterson kept mumbling and crying. He couldn’t believe his wife, Kathleen, was dead. He just didn’t believe it. He didn’t know how he could live without Kathleen. He didn’t know how a thing like this could have happened. The two of them were having a few drinks. The two of them were celebrating. The last thing he knew, he had gone out to the pool area, and had taken the dogs outside for a while. He thought Kathleen had gone upstairs to bed. He couldn’t understand how something like this could have happened.

It was impossible to think that his Kathleen was gone.

For some time , Michael Peterson could not be convinced that Kathleen was dead. To appease his father, there was a point when Todd asked to see the body himself, and the uniformed officers let him approach.

When Todd knelt down, police used a flashlight to help him take a look at his stepmom. Without asking, Todd touched Kathleen’s leg. There was no sign of life.

With the flashlight blaring, everyone in the room got a close-up view of Kathleen Peterson’s head, which seemed to be propped up at the foot of the stairs. People were aghast at all the blood around Kathleen’s body, all the blood staining her clothes.

They noticed bruises, and such a strange look of pain on her face...