A Recipe for Madness

Author Ray Garton cooks up a grotesque collection of terrifying tales that delves into human nature’s dark side.

Mix one part humanity with three parts ultraviolence, bring to a seething boil, and you’ve got a tale of terror by horror maestro Ray Garton. In Methods of Madness, the celebrated author of Live Girls, godfather of splatterpunk, and World Horror Convention Grand Master explores the darkness and depravity lurking in the recesses of our minds. And—warning—things get vulgar.

Don’t believe us? Take a peek at an excerpt from the novella "Dr. Krusadian’s Method." It begins with Jason, a seven-year-old who’s suffered unspeakable abuse at the hands of his parents. Jason tells Dr. Krusadian of a horrific episode. But Krusadian has a radical cure in mind.

Read on for an excerpt of Methods of Madness, and then download the book. 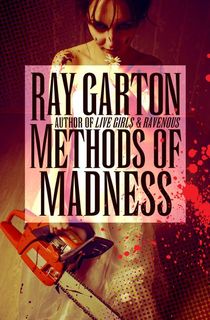 “And where are you?”

“Where are your parents?”

“Who will stay with you?”

“Probably Tracy. From down the street. Or Mrs. Royer.”

Jason was silent a while, lying on the sofa, eyes half open, but not seeing the living room ceiling, not really. He was, in his eyes, leaving his bedroom and going down the hall to the bathroom, where his mother was curling her hair. He stood in the doorway and watched her, unnoticed.

The phone rang and Jason heard his dad answer in the bedroom. Moments later, the curses began.

“Goddammit. Son of a bitch!”

Jason turned to hurry back to his room, but it was too late; his dad was coming down the hall, shirtless, a blue and red tie held in his fist.

“Forget it,” he said angrily. “Just forget it. She can’t come. Tracy can’t come. Dammit.” He pushed Jason aside and stepped into the bathroom. “She just called. No sitter. I’ll call and cancel the reservations.”

Want more horror books? Sign up for The Lineup's newsletter, and get our most terrifying tales delivered to your inbox.

Jason ached when he saw the shattered disappointment on his mom’s face.

“Can’t we get someone else?” she asked hopefully.

“Well, what the hell am I supposed to do? We’re sure not gonna take him with us!” He spun and returned to the bedroom.

Jason stepped toward the doorway again but collided with his mom, who shoved him into the doorjamb and snapped, “Dammit, Jason, get-out-of-the-way!” Hurrying down the hall, she called, “April’s gone tonight, but maybe Ken would watch him for us.”

Jason regained his balance, went into the bathroom, and stared at himself in the mirror as his parents shouted at one another.

“No,” his mom said, “we never go out, we haven’t been out in over a year, and now that we’ve actually made plans—”

“Well don’t bitch at me about it, you’re the one who wanted to have kids so bad, what the hell’d you think, they come equipped with babysitters?”

“You’re not calling to ask him anything.”

When Jason heard his mom begin to cry, he decided to go back to his room and read a book, stay out of the way, but as he turned around, his arm caught on something—a cord—and when he pulled his arm back, his mom’s curling iron slid away from the sink and fell to the floor.

Jason stared at it.

He knew he should pick it up, but Mom had always told him never ever to touch her curling iron and he was scared he’d make her angry.

So he stared, thinking about it, trying to decide what to do—as smoke began to curl upward from the blackening carpet. The smell was awful and, terrified, certain of the punishment that would come, Jason bent down and picked up the curling iron, but—the smoke alarm in the hall began to scream and the noise so startled him that he dropped it again.

He was trembling now, quaking uncontrollably with fear, but he tried to pick it up again before too much damage was done and, as he bent down, he felt the presence of someone behind him as the smoke alarm wailed on.

When fists began to fall on his neck and back, Jason knew that it was his dad, knew that his mother would be standing in the hall, watching, her eyes dead, until she could take it no longer.

But he was wrong.

“Goddamn you! Goddamn you!” his mom screamed again and again, her fists pounding in turn with each syllable. “How many times? How many times have I told you not to touch it? How many times? Don’t you know it’s hot? It’s hot!” She slammed him against the sink, clutched his wrist and pressed something into his hand, screaming, “Here! Here! Feel this? Feel it? Didn’t I say it was hot?”

When Jason felt his skin melting, he began to scream, “No, Mommy, no, don’t, noooo—”

“Why don’t you do what you’re told? All you do is make trouble! Trouble! All the screaming and crying—”

His mom fell away from him, staring with disbelief at the now messy curling iron held in her fist, her knuckles as white as her face.

Jason could not get enough breath to cry out loud; he simply shook with muffled sobs as his mom began touching him, caressing his face as she cried, “What have I done? What have I done?”

And from the hall, there came a groaning, long and deep and tremulous.

Jason clutched the sofa cushions beneath him, grinding his teeth.

Jason did, took them in deep and let them out slowly, gradually relaxing, feeling his body sink into the cushions.

Dr. Krusadian stood and gathered the tarpaulin together. As he began to drag it, full and heavy and shifting, from the room, Jason spoke.

Dr. Krusadian stopped, smiled, and replied, “Something for your parents.”

Want more horror books? Sign up for The Lineup's newsletter, and get our most terrifying tales delivered to your inbox.