The Copycat Killing Spree of Peter Sutcliffe, the Yorkshire Ripper

This copycat ripper claimed nearly three times as many victims as his Victorian predecessor—but he made one crucial mistake.

“I’m Jack. I see you are having no luck catching me.”

Jack the Ripper has fascinated and terrorized the world for more than a century. He’s also inspired countless copycat killers—including Peter Sutcliffe. Better known as the “Yorkshire Ripper,” Sutcliffe's murderous rampage had Britain on edge for five years in the 1970s, resulting in the largest criminal investigation in England’s history. He murdered nearly three times as many prostitutes as his Victorian-era predecessor, but unlike the original Jack, this Ripper made a crucial mistake.

In Coroner at Large, controversial medical examiner Thomas Noguchi delves into the case, as well as 19 more, using forensic science to reveal the truth behind notorious deaths.

Read on for an excerpt of Coroner at Large and then download the book! 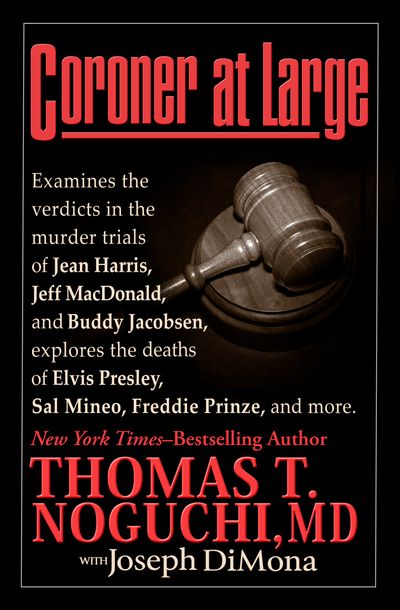 Almost a century after Jack the Ripper terrorized London, a series of nearly identical murders occurred in England. Once again the victims were prostitutes in inner-city slums who were savagely mutilated and, just as in the 1890s, police received taunting letters from someone who signed his name “The Ripper.”

Because of television and other means of instant communication which swiftly, and graphically, circulated the news of the murders, the new Ripper’s deeds inspired even more widespread horror than Jack’s. And the public was right to be afraid, for this “Ripper” did not stop after five murders; he eventually killed 13 young women in his murderous rampage.

The killing spree began on October 29, 1975, in Leeds, an industrial city in northern England. Chapeltown, an inner-city ghetto of Leeds with seedy bars and pubs, was the area in which Wilma McCann earned her living as a prostitute. Dressed in a pink blouse, blue bolero jacket and white slacks, McCann made the rounds of pubs that night and was intoxicated when she emerged from the last one, the Room At The Top, shortly before one o’clock.

The next morning a milkman spotted a body in the Prince Philip playing fields. Wilma McCann’s white slacks were down around her knees, and her brassiere had been moved up to expose her breasts. She had been stabbed in the lower abdomen and chest 13 times, and her head had been crushed with hammer blows. Despite the sexual overtones of the crime scene, there was no evidence of sexual activity.

Less than three months later, on January 21, 1976, another prostitute, Emily Jackson, was found murdered in Leeds in an even more brutal manner. This time in addition to the crushed skull there were no fewer than 52 stab wounds, and the killer had thrust a piece of wood between her legs.

The murders of these two prostitutes received little press coverage, and no connection was made between the deaths. Indeed, they were almost forgotten, until on February 5, 1977, the killer struck again in Chapeltown, smashing Irene Richardson’s head with a hammer, and stabbing her so viciously that her intestines spilled out. Once again the clothing of the victim had been pushed around to reveal her sexual parts, although no evidence of sexual activity was found.

My friend and colleague Professor David Gee of Leeds University’s Department of Forensic Science was the man who first realized the connection between the killings. He performed the autopsies on all three victims and saw the forensic “signature” of a single killer: the identical modes of death, hammer blows plus stabbing of the chest and the lower abdomen, as well as the clothing moved to reveal sexual parts even though no rape had taken place. When Dr. Gee revealed his findings, the press dubbed the killer “the Yorkshire Ripper,” and a new legend in the annals of serial crime was created.

In April of that same year, there was another slaughter in Chapeltown, this time of a streetwalker named Jayne MacDonald, whose body, in addition to the usual wounds, had a broken bottle embedded in her chest. The public now demanded action, and police launched a massive manhunt. Hundreds of people were interrogated, prostitutes were cautioned, a mobile police post was established in Chapeltown, and plainclothesmen fanned out through the area at night.

Related: Jack the Rippers From Around the World

Then the Ripper struck again. Maureen Long was intoxicated as she walked along Manningham Lane in Leeds at about 2 A.M. on July 9, 1977. A man in a car offered her a lift and she accepted. When she proposed sex for money, he agreed and took her to a waste ground on Randle Street near her home. Once she was out of the car, he struck her with a hammer and stabbed her in the stomach, the chest and the back. He rearranged her clothes, as usual, then left her for dead.

But Maureen Long didn’t die, and police finally had a witness who could describe the anonymous killer. Long told them that he was about 37 years old, over six feet tall, and had long blond hair. Ironically, her description turned out to be far off the mark and impeded the investigation, as detectives overlooked potential suspects who did not fit it.

The Ripper had been fortunate, but then he made a second mistake. On October 9, 1977, in his next encounter with a prostitute, Jean Jordan, in Manchester, a city near Leeds, he gave her a five-pound note in advance, and forgot it after he murdered her. Later he realized that this note was newly minted and taken from his pay packet at his place of employment, so it might be traced. But once again fate seemed to smile on the Yorkshire Ripper. The body hidden in bushes had not been found after a week. Emboldened, he decided to return to the scene of the crime and retrieve the note. But when he did so, he found the body but not her purse, and left empty-handed.

Five days later when the police discovered the body, they also found her handbag containing the five-pound note. Immediately they realized the significance of the banknote and started on its trail. The note could not be traced to one man, but it could narrow the field to employees of companies which had received a certain batch of currency from a subbranch of the Medford Bank in Shipley. Eventually the police interviewed 8,000 men, including the Ripper, but his wife assured the police that on the night of the murder he had been home in bed with her.

And so the killings went on. Helen Rytka, 18, was the next victim, and the Ripper, in a break with his custom, raped her before stabbing her to death. In doing so, he left evidence of semen. In the 1890s forensic science could have done nothing with such evidence. But in 1977 forensic scientists on the case, led by Dr. Gee, quickly analyzed the semen stains and discovered the Ripper’s blood type. It turned out to be Type B, which is found in only six percent of the population in Britain.

Related: 10 Most Depraved Serial Killers of All Time Ranked by Their Number of Victims

Furthermore, footprints in bloody areas near the bodies of his victims had been measured, so Dr. Gee knew the Ripper’s foot size. The wounds had been analyzed, enabling Dr. Gee to describe the weapons—a ball-peen hammer, knives and a Phillips screwdriver. And tire tracks had been found which could eventually identify his car. Gradually, forensic science was homing in on the killer—and then the murder of his next victim, Josephine Whittaker, left yet another critical forensic clue. Tiny metallic particles and machine oil were found in the wounds of Whittaker’s body. From this clue Dr. Gee knew that the Ripper worked around machinery.

But just at that time the case was sidetracked by a series of letters signed “Jack the Ripper,” and a tape recording. The letters were similar to those received by a puzzled police force ninety years before, as was the tape, which began, tauntingly, “I’m Jack. I see you are having no luck catching me.” Police not only took the letters and the tape seriously, they also played the tape on national television and radio. The voice on the tape had a peculiar accent associated with a small mining town called Wearside, and police told detectives to disregard all suspects without such an accent. Unfortunately, the tape was fraudulent.

And so the killings went on and on, even as the police manhunt escalated into the largest criminal investigation in England’s history …

Want to know the truth behind the untimely deaths of Dennis Wilson, Elvis Presley, and Sal Mineo? Download Coroner At Large.

Want more true crime books? Sign up for The Lineup's newsletter, and get our recommendations delivered straight to your inbox.