Sinister Legends Spring to Life in This Terrifying Collection

Haunted houses, forsaken cemeteries, spectral visions at the witching hour. Such is the stuff of urban myth, spooky stories we share on the darkest of nights. But what if these sinister legends seeped into reality—and came looking for you?

Witching Hour: Sinister Legends collects thirteen tales of terror based on lesser-known urban legends from around the world. Lurking within its pages are chilling narratives of troubled spirits beneath the streets of Toronto, twisted Russian sleep experiments, and a stairwell to hell in the Pacific Northwest. Penned by some of the best up-and-coming authors in horror, this spine-tingling collection is sure to linger in your mind long after you turn the last page. After all, in every legend there is a seed of truth.

In the short story “The Alice Murders” by W.M. Dawson, a nightmarish entity prowls the city in search of fresh blood. It calls out to each doomed soul with the same name: Alice. And it seems to have found its next victim ...

Read on for an excerpt of Witching Hour: Sinister Legends, and then download the book. 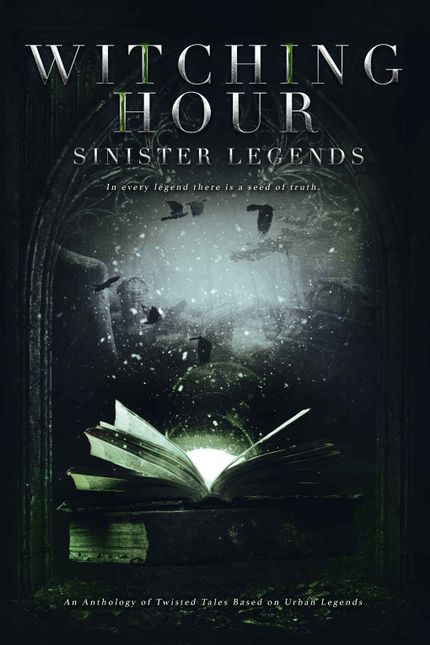 At the partially filled bar, patrons enjoyed the cheap beer and half-priced appetizers instead of the live band. The lead singer, Yamane Akio, had belted out several favorite songs in English and Japanese, allowing the audience to give half-hearted applause. The band took the mediocre praise given the gig paid and gave them food. The group ate together, discussing new gigs and their work lives outside of the band since they couldn’t yet live off the few profits they made.

“Can you hear me?” The whispered voice made it over the talking but not the ambiance of the crowd and background music. It stretched, trying to reach the next one, but nothing could amplify the voice louder.

Akio packed up the leftovers. He would donate them along the walk home to anyone who needed food and would eat anything left throughout the week. He hated to see anything go to waste when others were in need. Akio knew he and several of his friends were a few shaky steps above being on the streets. Luck and work had saved them. Others didn’t always have the chance.

Related: 7 Books That Tap Into Our Worst Fears

Several members of the group left, heading home by walkways or the subway system, going in the coming cold. Akio took the bags of food, offering what he could until he reached the shelter he volunteered at each week. He left several bags of food and only made one with him to sustain him for the next few days. He wandered through the streets, taking in the night, humming an unfinished tune that he couldn’t get out of his head. It was catchy, but not enough to understand the words. He searched for more than just a tune, words and notes. He kept humming to try to make something stable, just a basic melody and some words.

He passed the streets closer to his studio, and before climbing the stairs to the top of the building, gave a few extra yen he had gotten in tips to those he passed. The studio shared walls with several other studios. It was cheap, warm with an attempt at cozy with the additional instruments, sheet music, and a keyboard against the wall. The futon held a pair of mismatched guitars that he was working to make into one full one, someday.

He changed, took a quick shower. The chalked in dark blue streak added to his dark hair bled into the drain. The sweat and hours of practice melted in the steam before he got out. He changed into his comfortable boxers and cleaned off the bed. Slipping into the fresh sheets, he meditated per habit before sleep. He was calm, and rest came quickly. He woke several hours later from the severe icing over the studio. A whisper hissed in the dark.

Want more creepy tales? Sign up for The Lineup's newsletter, and get chilling stories delivered straight to your inbox.

“Can you hear me?” it asked, just above the ambient city noise below.

As he sat up, the darkness enveloped him to the point nearly none of the light could creep in through the window. He tugged the blanket from the end of the bed, up to his chin, to fight off the bitter ice.

“I can hear you.” His tenor voice pitched higher, the chill and fear dancing through his veins. He felt the fear, the ice, and a taste of terror.

“Come with us.” The cursed darkness said. No other sound fought through the cold, but the hushed words bit in. “Come to me, Alice.”

“I am not Alice. You have the wrong place. Maybe one of the neighbors?” he asked, feeling foolish talking to the dark. He was pretty sure he hadn’t drunk much, and he didn’t do drugs. Maybe it was just a nightmare.

“You are all Alice,” the keen came out, hurting his ears and shaking the window. It was pitched high and bitter.

He slipped out of bed. The slippery floor bit into his bones, screaming up his legs and into his hips. The whole place dripped in frost, from the ceiling to the floor, coating the furniture and musical instruments. It chilled deeply, painfully, staggering him in the cold. He grabbed the night‐ stand before darkness took him. It poured over him with a high-pitched laugh, whispering Alice over and over. He never felt or heard the blow from behind. He hit the floor, never seeing anything in the dark.

He disappeared from the apartment, unceremoniously in a large black garbage bag, fading into the unnatural blackness over the city of millions. The figure, taller than a human shadow, took him from the apartment complex and his life. The video footage could barely make out the pieces of darkness moving in the pitch.

Related: Peer Into The Mammoth Book of Nightmare Stories...If You Dare

Morning broke, fighting off the cold and darkness that had kept everyone inside that night. Akio’s girlfriend, running late with their morning burritos and coffee, knocked on his door. Usually, the texts would have gotten her moving sooner, but she had curled into her bed not wanting to leave until the sun was fully up.

She waited at the door, knocking until the neighbors asked why he wasn’t answering, concerning her. She pulled out the emergency key. They had given each other one months ago. She entered the apartment. Coldness spilled out, chilling the air, and water seeped over the floor. Nothing was made up, the place dripped with water, and there was no sign of Akio. She called the police, waiting for them outside the studio with several neighbors. The police questioned everyone, looking high and low before filing the missing person report.

The security footage pulled barely showed hints of the shadowy figure with the oversized bag. They assumed kidnapping of Akio, but no one had seen the suspect coming in or out. Weeks of searching continued without a sign.

Nearly two weeks later at the last club where Akio and his group played, the early shift opened and found the stage covered in blood. The screaming manager ran out to call for help while several employees peeked in and saw the drip‐ ping remains of Yamane Akio. His throat had been carved out, vocal cords missing. But the killing blow had been the bullet to the brain.

The police found no DNA, fingerprints, or sign of who was involved with the killing of Akio. The police were baffled, and the only clue was a playing card in his left hand. It was the king of diamonds with the name ALICE written in his blood across the top.

Later in the day, his vocal cords were found in his apartment stretched out in diamond patterns with ALICE written in his blood across the wall.

This post is sponsored by Witching Hour Press. Thank you for supporting our partners, who make it possible for The Lineup to continue publishing the creepy stories you love.