Peer Into The Mammoth Book of Nightmare Stories...If You Dare

You'll be sleeping with the light on after reading this nightmarish collection.

Fair warning, reader: The Mammoth Book of Nightmare Stories collects 16 rare tales of terror penned by the most frightening minds in horror. From paranormal visions to bone-chilling narratives of madness and murder, these twisted stories are not to be read at night—unless of course you like to be scared …

Celebrated horror and dark fantasy author Stephen Jones serves as the editor of the anthology. The five-time Bram Stoker Award winner looked to the legendary horror volumes of the past while assembling his latest collection. He also asked a number of the contemporary authors featured within to select their "favorite stories and novellas that, for one reason or another, they felt had been unjustly overlooked."

The result? Killer horror gems by Neil Gaiman, Caítlin R. Kiernan, Ramsey Campell, Poppy Z. Brite, Michael Marshall Smith, and more that are dying to be read. The Mammoth Book of Nightmare Stories is available now in paperback; the ebook will be released on February 19, 2019. We’ve got a peek at what lurks within.

In the following excerpt of "The Unfortunate", bestselling author Tim Lebbon taps into the real-life terror of a plane going down. For many, it’s impossible to imagine a more horrifying experience. But for the unfortunate soul at the center of this tale, the nightmare has just begun.

Read on for an excerpt of The Mammoth Book of Nightmare Stories, and then buy the book.

The Mammoth Book of Nightmare Stories: Twisted Tales Not to Be Read at Night! 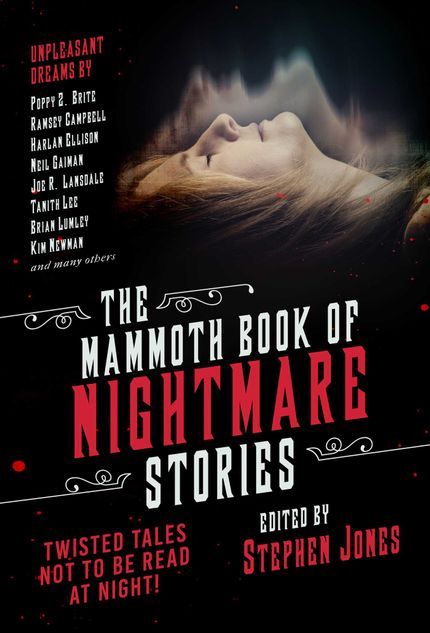 He had found them in the water.  At least he liked to think he found them but later, in the few dark and furtive moments left to him when his mind was truly his own, he would realize that this was not the case. They found him. Gods or fairies or angels or demons—mostly just one or another, but sometimes all four—they appeared weak and delicate.

It was not long, however, before Adam knew that looks count for nothing.

Put on your life jackets, the cabin crew had said. Only inflate them when you’re outside the aircraft. Use the whistle to attract attention, and make for one of the life rafts. As if disaster had any ruling factor, as if control could be gained over something so powerful, devastating, and final.

As soon as the 747 hit the water, any semblance of control vanished. This was no smooth crash landing, it was a catastrophe, the shell splitting and the wings slicing through the fuselage and a fire—brief but terrible—taking out First Class and the cockpit. There was no time even to draw away from the flames before everything fell apart, and Adam was pitched into a cool, dark, watery grave. Alison, he thought, and although she was not on the flight—she was back at home with Jamie—he felt that she was dead already. Strange, considering it was he who was dying.

Because in the chaos, he knew that he was about to die. The sounds of rending metal and splitting flesh had been dampened by their instant submersion in the North Atlantic, but a new form of blind panic had taken over. Bubbles exploded around him, some of them coming from inside torn bodies, and sharp, broken metal struck out at him from all around. The cold water masked the pain for a while, but he could still feel the numbness where his leg had been, the ghostly echo of a lost limb. He wondered whether his leg was floating above or below him. Then he realized that he could not discern up or down, left or right, and so the idea was moot. He was blinded too, and he did not know why. Pain? Blood? Perhaps his eyes were elsewhere, floating around in this deathly soup of waste and suffering, sinking to the seabed where unknown bottom-crawlers would snap them up and steal everything he had ever seen with one dismissive clack of their claws.

He had read accounts of how young children could live for up to an hour submerged in freezing water. They still retained a drowning reflex from being in the womb, their vocal chords contracted and drew their throats shut, and as long as they expelled the first rush of water from their lungs they could survive. Body temperature would drift down to match their surroundings, heart rate would halve, oxygen to the brain would be dramatically lessened, brain activity drawn in under a cowl of unconsciousness. So why, then, was he thinking all this now? Why panic? He should be withdrawing into himself, creating his own mini-existence where the tragedies happening all around him, here and now, could not break through.

Why not just let everything happen as it would?

Adam opened his eyes and finally saw through the shock. A torn body floated past him, heading down, trailing something pale and fleshy behind it. It had on a pair of shorts and Bart Simpson socks. No shoes. Most people kicked off their shoes on a long-haul flight.

The roaring sound around him increased as everything began to sink. Great bursts of bubbles stirred the terrible brew of the sea, and Adam felt a rush of something warm brushing his back. A coffee-pot crushed and spewing its contents, he thought. That was all. Not the stewardess holding it being opened up by the thousands of sharp edges, gushing her own warm insides across his body as they floated apart like lost lovers in the night ...

And then he really opened his eyes, although he was so far down now that everything was pitch-black. He opened them not only to what was happening around him, but to what was happening to him. He was still strapped in his seat. One of his legs appeared to be missing . . . but maybe not, maybe in the confusion he had only dreamed that he had lost a leg. Perhaps he had been dreaming it when the aircraft took its final plunge, and the nightmares—real and imagined—had merely blended together. He thought he felt a ghost ache there, but perhaps ghosts can be more real than imagination allows, and he held out his hands and felt both knees intact.

Other hands moved up his body from his feet, squeezing the flesh so that he knew it was still there, pinching, lifting ... dragging him up through the maelstrom and back toward the surface. He gasped in water and felt himself catch on fire, every nerve end screaming at the agony in his chest. His mind began to shut down—

yes, yes, that is the way, go to sleep, be that child again

—and then he broke surface.

Want more horror books? Sign up for The Lineup's newsletter and get our freakiest recommendations delivered straight to your inbox.

The extraordinary dragged his sight from the merely terrifying. He was aware of the scenes around him—the bodies and parts of bodies floating by, the aircraft wreckage bobbing and sinking and still smoldering in places, the broken-spined books sucking up water, suitcases spilling their insides in memory of their shattered owners—but the shapes that rose out of the water with him were all that he really registered, all that he really comprehended. Although true comprehension ... that was impossible.

There were four of them, solid yet transparent, strong yet unbelievably delicate. Their skin was clear, but mottled in places with a darker light, striped like a glass tiger. They barely seemed to touch him, yet he could feel the pinch of their fingers on his legs and arms where they held him upright. The pain seemed at odds with their appearance. He closed his eyes and opened them again. The pain was still there, and so were the things.

They were saving him. He was terrified of them. For one crazy moment he looked around at the carnage and wished himself back in the water, struggling against his seat restraint as it dragged him down, feeling his ears crunch in and his eyeballs implode as awful pressures took their toll, sucking out the last of his air and flooding him and filling him. Perhaps he would see Alison again—

—love her as he had always loved her, feel every moment they had shared. He thought it was a fallacy that a drowning man’s life flashes before him. But it was a romantic view of death, and if he had to die then a hint of romance ...

Related: Beware the Doll-Master and His Terrifying Collection

"You are not going to die," a voice said. None of the things seemed to have spoken and the voice appeared in his head, unaccented, pure, like a playback of every voice ever saying the same thing.

He looked around at them. He could see no expressions because their faces were ambiguous, stains on the air at best. He reached out and touched one, and it was warm. It was alive. He laid his palm flat against its chest.

"That is all right," the same voice intoned, "feel what you must. You have to trust us. If you have to believe that we are here in order to trust us, then make sure you do. Because we have a gift for you. We can save you, but ... you must never forget us or deny us."

Adam held out his other hand. "You’re there," he whispered as he felt a second heartbeat beneath his palm. For some reason, it felt disgusting.

He was balanced on a fine line between life and death. He was in no condition to make such a decision. That is why all that happened later was so unfair.

He nodded. And then he realized the truth.

"I’m dead." It was obvious. He had been drifting down, down, following the other bodies deep down, perhaps watched by some of them as he too had watched. He had known his leg had gone, he had felt the water enter him and freeze him and suck out his soul. He was dead.

"No," the voice said, "you are very much alive." And then one of the things scraped its nails across his face.

This post is sponsored by Skyhorse Publishing. Thank you for supporting our partners, who make it possible for The Lineup to continue publishing the true crime stories you love.