She was the glamorous madam of New Orleans' most decadent brothel – until the long arm of the law came pounding at her door.

Norma Wallace knew how to hustle.

In 1916, at just 15 years old, she was a lone streetwalker in New Orleans’ rough and tumble French Quarter. A mere four years later, young Norma commanded the city’s best bordello – servicing randy gangsters, sneaky movie stars, and even the boys in blue from the NOPD.

Her outrageous escapades shocked The Big Easy; her many lovers included bootleggers, band leaders, and a handsome young devil nearly forty years her junior. Norma was fiercely independent – yet she always lived in the shadow of the law.

In The Last Madam: A Life in the New Orleans Underworld, Christine Wiltz combines in-depth research with personal memoir to recreate Norma’s scandalous reign as the Queen of the Crescent City. In this excerpt, Norma’s business is growing like gangbusters, when Captain Big Mo Guillot starts poking around. Big Mo intends to clean up the French Quarter. Now Norma must act fast if she wants to survive. 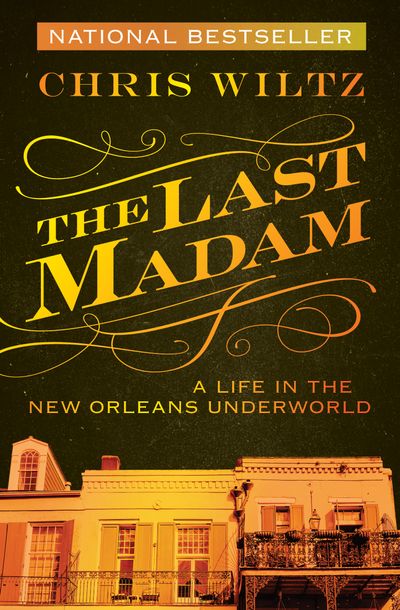 Big Mo suspected that Norma had a hideout, and she was afraid he would find it; she decided it was time for elaborate security measures.

The hideout was behind the parlor, the entrance to it in the courtyard, to the side of the stairway. At one time there had been a dungeon “with a wall where slaves were shackled, and the hideout had been a runway to the dungeon. It needed a new, undetectable door. The inside wall of the courtyard was tongue in groove; her carpenter made the door fit so flush that it was difficult to see any lines where it met the wall. Once the iron bar inside was slid into place, it was nearly impossible to find a crack. For extra camouflage, Norma put tall tropical trees—palms, ficus, hibiscus, and banana—in rolling boxes. When the door to the hideout was bolted, she rolled the trees in front of the entrance.

She also had a buzzer system installed. A girl was stationed at the window in the entrance hall during operating hours. If she spotted a police lookout or a suspicious looking car drove into the alley, she threw the buzzer, which meant, Get to the hideout as quickly as possible!

Norma developed a system of spies. Her spies kept Big Mo’s house under surveillance until his car was in the driveway and all lights were out, then called Norma to tell her that the captain was away for the night.

As another precaution, she rented a condemned building around the corner on North Rampart Street. When Big Mo and the little policeman arrived, the girls could escape through the gate at the end of the Conti Street driveway and into the boarded-up building until the inspection was over.

One night a police lookout was across from the house when a regular customer, weaving a little with all the drinks he’d had over on Bourbon Street, came up the driveway and rang the back doorbell. Norma slid open the little barred window she’d installed in the door.

“You idiot,” she said, “don’t you see that policeman across the street?”

Norma nearly took his nose off when she slammed the little window in his face. She turned to Jackie. “Tricks don’t have a lick of brains!” Jackie nodded.

Another night the girl at the front window threw the buzzer—Big Mo was driving up the alley. Norma led two other girls and their dates through the gate to Rampart Street. The dates took off; she and the girls entered the condemned building through a specially rigged piece of plywood. But this time Big Mo got Norma. Norma was arrested three times in 1953, twice by Big Mo. He personally took her to be photographed and fingerprinted.

The young sergeant behind the desk asked Norma her age. As usual, she lied. “Thirty-eight,” she replied.

Norma made a hundred-dollar bail and left while the night was still young. The story was on the front page of The Times-Picayune the next day, October 13, 1953. The second time Big Mo got her was four days later, in a surprise ambush at 1026 Conti—he had the door down before anyone could respond to the buzzer and get to the hideout. As always, though, Norma didn’t spend so much as a night behind bars.

One night shortly afterward, Elmo [Norma’s brother] called Norma from the Moulin Rouge, as he often did, wanting to know if he could send a customer over. Norma decided she’d better send a girl to the Roosevelt to meet him. She chose a new girl, unknown in town. The girl dressed up in her hat and gloves and carried her overnight case up the steps to the hotel. Big Mo happened to be driving by and called out to her from his police car before she could get through the door. Norma said to Jackie after she paid the girl’s fine, “That man can smell a whore!”

Big Mo sabotaged Norma’s spies. One evening Norma got a call that he was down for the night, and no sooner did that spy hang up than another called saying he was on the way. She went to the foyer window just in time to see him wheeling into the driveway. She threw the buzzer; he jumped out and rang the side bell.

Norma had trained her girls to act fast. It took only a couple of minutes for them to get into the hideout. She opened the door and said pleasantly, “You’re always coming here when I’m changing clothes, Captain.” Big Mo laughed.

He lifted his tiny partner inside. Jackie was sitting in the courtyard, her long, stockinged legs crossed at the knees, wearing a low-cut black sheath with a wide, leopard-print belt. Big Mo asked her what she was doing there.

“Then where’re your flimsies?” He meant her clothes.

Jackie explained that she occupied a room upstairs. A girl named Mary actually lived in the room; Jackie was living with a doctor by that time. Guillot went upstairs and came down with two tiny dresses, a top, and a kimono that belonged to the petite Mary.

“Do these things fit you?” he asked Jackie. “Let’s see you try them on.”

Jackie waved her hand at the skimpy dresses Big Mo held. “Oh, Captain, I outgrew all those clothes.”

Big Mo and the little policeman laughed; Norma and Jackie laughed. “You know,” Big Mo said to Norma, “I’ll never frame you, but if I get you fair and square, I’ll get you good.”

“Oh, I believe you, Captain,” Norma said demurely. And in one way, she did. Big Mo was interested in her—she knew all the signs—but so far he’d made no moves.