These Big Easy destinations are secretly crawling with ghosts. 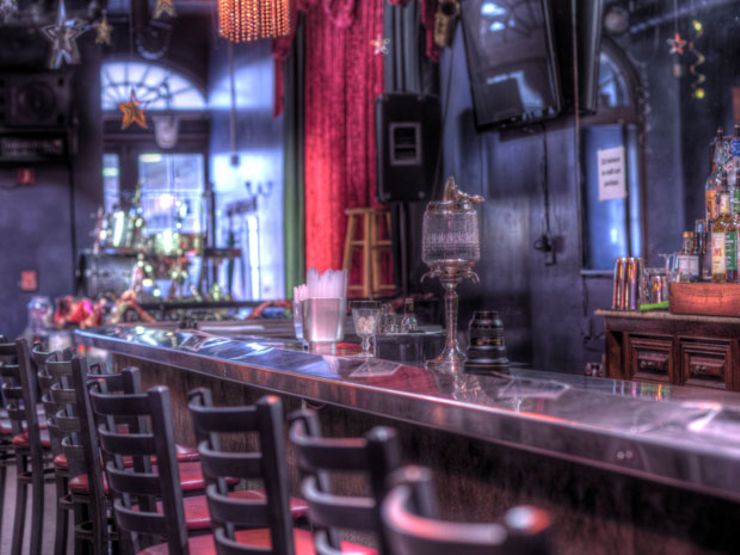 In the 1880s, the current-day Mahogany Jazz Hall was the place where people went to die.

Seated two blocks from the Mississippi River, this rowdy establishment—then known as Folk’s Lodging House—welcomed sailors, merchants, and the otherwise desperate within its bricked walls. 26-year-old Charles Murphy was a long-term guest. He was a shoemaker, an Englishman, and had worked for Anderson’s Shoe Factory in New Orleans for nearly two years when a debilitating fever struck him.

By the time he returned to the lodgings at the end of his work shifts, shaken and drawn to the bone, Murphy only ever had enough energy to remind Mr. Folk to wake him at 6:00 A.M. the next morning. This was their ritual.

At 6:00 A.M. on the dot, Mr. Folk strolled up the stairwell and went to Murphy’s room. He rapped on the door with a closed fist, lingered a moment when Murphy rose from bed for a quick chat, then descended back down the steps.

Murphy shut the door behind Mr. Folk. Quietly, so as not to alert anyone, the young shoemaker secured a piece of clothing line about 2.5 feet long on an iron hook on the wall … the other side of the rope he fastened around his neck and strangled himself.

This was not the end for Folk’s Lodging House. 32-year-old German immigrant, George Kreis, had taken up residence at the lodging house after Mr. Folk found him living on the streets.

“I’ll help you get a job,” Mr. Folk must have promised to the desperate Kreis. And a job was exactly what the German needed; he was new to the city and completely broke.

The job that Mr. Folk found for Kreis was in baking goods, and Kreis took him up on it. But there was a problem: Kreis did not know how to bake. He didn’t even know how to cook. On Valentine’s Day in 1890, Kreis withdrew the last of his money and purchased a Defender .32 caliber revolver. He waved goodnight to Mr. Folk around 10 p.m., went up to his room, put the revolver in his mouth, and curled his finger around the trigger.

Kreis blew his brains out that night. And poor Mr. Folk was left to find yet another suicide victim.

Mr. Folk’s Lodging House was plagued by other deaths over the years, including a rather nasty 1892 murder broadcasted in the Times-Picayune with the headline, “Shot in the Dark: Mysterious Killing on 125 Chartres Street.” No one understands why this building has attracted such horrific events, but it’s safe to say that the ghosts of these victims still haunt the venue today.

Guests have experienced phantom hands touching them, disembodied voices whispering in their ears, and even sightings of dark shadows moving about the bar. The Mahogany Jazz Hall might not be the place where people go to die any longer, but the darkness from that period lives on in the property’s countless spirits. 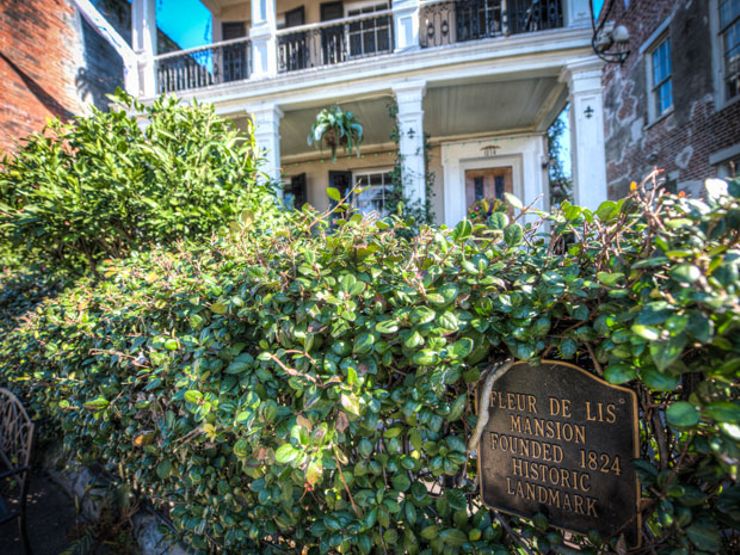 This beautiful Greek Revival mansion dates back to 1820s, when the Saulets, one of New Orleans’ founding families, acquired the property. The mansion is rumored to have been a brothel in the early 1900s, although no evidence of this survives.

Despite such rich history, the Fleur de Lis slipped into disrepair by the 1990s, with itinerants living inside the abandoned home. Huddled in what is now known as the Red Room, these residents survived the winter months by burning fires inside. They hauled newspapers and wood into the property, struck a match and set the tinder ablaze.

In 2008, one fire got out of hand. The flames spread through the rooms, burning through much of the mansion. Thankfully, the old bones of the structure survived. When new owners acquired the property a few years later, they sought to restore the mansion to its original grandness.

Today, the Fleur de Lis is a bed and breakfast. Yet the ghosts of the past remain.

Related: Darkness in the Room: a Haunting at the Andrew Jackson Hotel

In the River Suite, a pair of guests watched in fear as the door swung open and crashed against the wall. In the Red Room, with its doors still scarred by the fire, an unfortunate guest awoke in the middle of the night to see a man standing at the foot of the bed, watching her as she slept. His apparition dissipated as soon as she jerked upright and screamed. In the Fleur de Lis Suite, voices have been heard, murmuring as though begging the living to take note of the dead.

While the historic hotels in the French Quarter represent New Orleans’ better known paranormal hotspots, the Fleur de Lis Mansion, a charming bed & breakfast with original features, stands toe-to-toe with the best of them. If you don’t believe us, book yourself a night at this haunted B&B and just wait until the stroke of midnight. 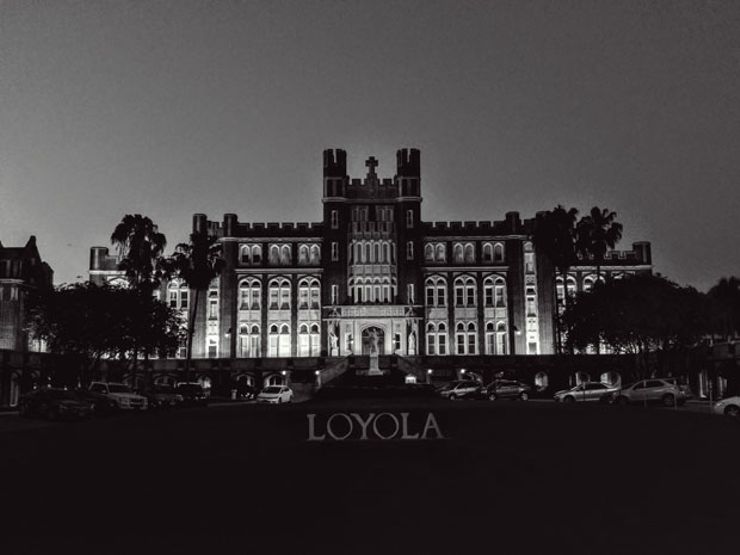 Marquette Hall, Loyola’s very own castle (and its administration building) has a secret: from 1916 to 1966, its fifth floor was used as a morgue for the university’s anatomy majors.

Students seated in class on the building’s lower levels grew accustomed to the high-pitched creaking of the crane. Without even a glance at the windows, they knew that the groaning ropes and screeching pulleys meant that a body was being brought up for dissection. “Sometimes,” the university’s newspaper noted in 2002, “the stretcher would tilt and a bare foot would stick out from underneath the sheet.”

According to former officers of the university, that external winch can still be found on the fifth floor. While Loyola no longer has a morgue, the haunting cranking of the pulley still echoes through the night. Temperature fluctuations are common in Loyola’s most picturesque building, and so are doors flying open and slamming shut by unseen forces—but only ever on the fifth floor.

Related: The 13 Most Haunted Schools in the U.S.

Two years after the morgue closed its doors, Loyola’s dealings with the dead made news because of an exorcism that took place in the all-girls dorm. A group of female students believed that they had made contact with Satan, as well as with a female spirit named Hazel whose husband died in prison for a crime she herself committed.

The more often the students attempted to communicate with the other side, the more intense the paranormal phenomena became. Objects rearranged themselves on their dorm room shelves, posters were ripped off the walls by an invisible hand, furniture slid unpushed across the floor.

Most don’t believe that Satan ever visited Loyola. Instead, skeptics contend that the girls simply played a prank. The truth has never been determined, though the ghostly activity continues to this day—whether it’s the haunting sound of the pulley hauling up cadavers or strange sensations within the dorm. 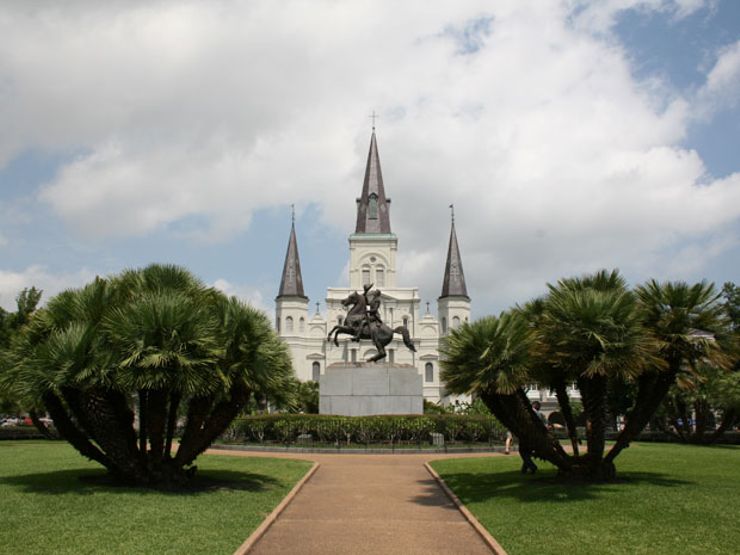 Jackson Square is the heart of the French Quarter—it’s a place for picnics, games, and weddings. But during the 18th and early 19th centuries, Jackson Square had a much different name and a much darker reality.

It was known as the Place d’Armas, thanks to the Army barracks that enclosed it, and it was not a slice of heaven but rather a slice of hell.

It was the public execution square.

On Sundays, church-going folk left Mass at St. Louis Cathedral, crossed the dirt path, and entered the Place d’Armas. There they waited with for the prisoners to be selected from the Old Parish Prison, which was once tucked in the rear of the Cabildo, the old governing seat.

Lesser criminals did their time in the stocks, positioned around the square for utmost humiliation. Those whose crimes were more severe were led to death.

Some met the guillotine. Others were hanged. For Jean Baptiste Baudreau Dit Graveline II, however, it was a fate worse than death. He died upon a medieval contraption of pure pain—the torture wheel.

Born in 1710, Jean Baptiste was early colonialist in French Louisiana who repeatedly ran afoul with authorities. By the 1750s he found himself a prisoner of the French island prison on present-day Cat Island, Mississippi. When a mutiny broke out among the soldiers stationed there in 1757, Jean Baptiste was charged with participating—this despite a signed document from the actual mutineers that he played no part in the revolt.

On June 7, 1757, Jean Baptiste was brought to Jackson Square, and tied to the wheel. The executioner readied his club. Bone by broken bone, Jean Baptiste was bludgeoned to death. He was one of the few individuals ever executed in the Americas in this manner.

They say that New Orleans was founded on violence, but perhaps it was also founded on the perception that misbehaving must be severely punished.

As it turned out, not even the priests of St. Louis Cathedral blessed the criminals before they met their final match. They were given no absolution for their sins; no sign that they would ever ascend to Heaven.

They met their maker believing that God had turned His back on them.

With so much heartbreak, it only makes sense that Jackson Square is one of the most haunted places in the French Quarter. Death, torture … It seems that many of the people executed at the square remain, their spirits left to wander the place of their death for all of eternity.

Today, those who brave a visit to Jackson Square after dark frequently catch paranormal activity on their cameras. Orbs dancing in the air. Eerie mists rising high above the grass. And then, almost like an echo of the passage of time, a scream rising above the sounds of jazz, joviality, and passing traffic.

One must wonder to whom those ghostly screams belong—the prisoners, forced to relive their final moments of life forever in death? Or perhaps the priests themselves, who refused to bestow final rites on the criminals … and may now be suffering the consequences.

Maria first came to New Orleans to attend college and quickly realized that the Crescent City’s weirdness matched her own. Since then, she’s left only to attend graduate school across the pond in England. She’s been a tour guide in a medieval townhouse, a Viking museum, and, most recently, a guide for Ghost City Tours. Through working as a tour guide for Ghost City, Maria was offered her current position of Media and Public Relations Director. Her role for the company comprises her favorite topics: writing and history. If you’re looking to talk murder, mystery and scandal in pre-20th century America or Medieval Europe, she’s your girl!