Meet Monsters, Both Real and Imagined, in This Eerie Short Story Collection

Acclaimed mystery novelist Stuart Neville ventures into spookier territory with The Traveller and Other Stories.

There’s nothing scarier than real life—although a well-placed specter or two is never something we’d complain about. In The Traveller and Other Stories, Stuart Neville, author of The Ghosts of Belfast, turns from thrilling mystery to chilling horror.

Thirteen macabre tales feature killers and specters sure to haunt your dreams for days to come. Neville sets his stories amidst his native Irish shores, filling each yarn with a hint of the old country. This blend of genres conjures nightmarish realities to create a bone-chilling collection.

Related: 13 Scary Books We Can’t Wait to Read This Fall

We're thrilled to be including The Traveller and Other Stories in the upcoming October/November Creepy Crate. Join now for your chance to receive a copy of the highly-anticipated collection!

Read on for an excerpt of The Traveller and Other Stories.

The Traveller and Other Stories 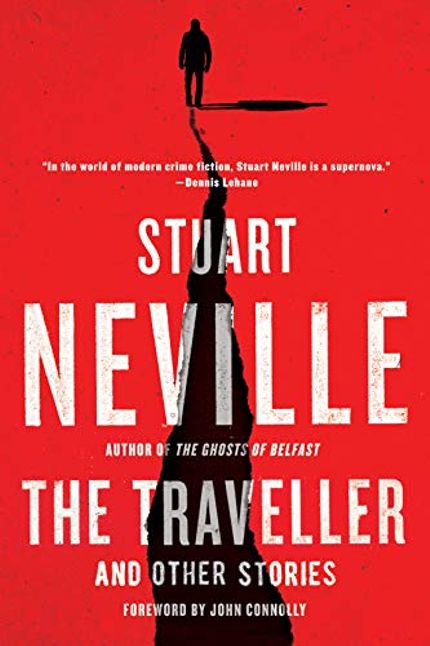 Billy dipped his bucket in the water as the bright dart of a stickleback flashed against silt and pebbles. Too quick, it zipped past, lost amid the blinding patterns on the stream’s surface. The sun warmed Billy’s shoulders through his Starsky & Hutch T-shirt.

Billy fell back at the sound of the voice. The bucket slipped from his fingers and the stream’s plucky current snatched it away.

The old woman resting on the opposite bank clucked. “Ah, now you’ve lost your bucket too.”

The orange plastic vanished around a bend in the stream. He’d only got it a couple of weeks ago when he went on a Sunday School trip to Portrush.

“That’s a pity,” the old woman said, drawing her green shawl around her shoulders.

Related: Victor LaValle: Where to Begin with the Award-Winning Horror Author

Billy wondered how she didn’t melt. The telly said it would be the hottest day of the summer, and here she sat with a shawl and big layered skirts. Her shoes looked funny too; more like the kind of boots the soldiers wore when they patrolled the streets.

The old lady smiled. “Have you no one to play with today?”

Billy shielded his eyes from the sun and shook his head. “Speak up, wee man. Don’t be shy.”

Swiping dust from his jeans, Billy got to his feet. “I called for my friend, but he wasn’t in. His daddy took him to Belfast.”

“Have you no other friends?” She tilted her head as she studied him, her grey-green eyes picking over every bit of him.

Want more terror? Sign up for The Lineup's newsletter and get our scariest stories delivered straight to your inbox.

Billy sucked on his lower lip and looked at the baked earth beneath his feet. His mum had taken him out of the Drelincourt School where all the other kids on the estate went and made him go to the big school in town. Because he was smarter than the others, she said. Now he had no one on the estate left to play with.

The old woman clucked and smiled, showing her stained teeth. Midges swarmed around her head, mingling with the loose silver strands of her hair to make a shifting halo in the sunlight. Somewhere in the trees a bird called. Billy looked around him. Down here at the water’s edge he couldn’t see the playground up above, or the houses beyond.

“I remember when this was a real river,” the old woman said. “It stretched from yon houses up there, all the way back to the houses on the other side. It cut this big bowl through the earth. But there were no houses then. Except mine.”

Billy looked downstream, wondering if the bucket might have snagged on some rocks. He should go after it.

“It’s gone, wee darling. Sure, it’ll be halfway to the sea by now.”

Billy knew that was nonsense. He wasn’t sure how far away the sea was from the Folly River, but he remembered it took the bus ages and ages to get to the seaside. His Mum had always told him to be polite to old people, so he didn’t want to argue. Instead he chewed on his lip and picked dirt from under his fingernails.

“Where’s your house?” he asked.

Billy stopped picking at his fingernails. “No one lives there. It’s got no roof or doors or anything.”

“Is that right?” She laughed and slapped her thigh, the sound muted by the layers of skirt. “And how do you know that?”

Billy went back to picking at his nails.

“Have you been there?” she asked.

He scuffed at the light brown earth with his worn plimsolls.

“Does your mummy let you play there?”

Billy raised his eyes to meet hers and shook his head.

“And did you get scared?”

Her smile returned. “Did you cry?”

Billy’s cheeks grew hot. Sweat licked at his forehead and made the thin cotton of his T-shirt stick to his back. He sniffed and wiped his nose on his forearm.

“No need to be ashamed, love. Sure, everyone gets scared.” She pointed over Billy’s shoulder. “Even Michael there, and he’s a big boy.”

Billy spun on his heels to see a boy, about twelve, sitting cross-legged in the dirt. “Hello,” Michael said.

He wore strange clothes, like the olden days photos Billy’s grandad kept in a big book. A plain jacket and short trousers, with a collarless shirt. “What are you staring at?” he asked.

“Be civil, Michael,” the old lady called from across the stream. “This wee man needs someone to play with.”

“He’s too young to play with me,” Michael said, scowling.

“Michael’s a bold boy,” the old lady said. Billy turned back to her, and his tummy fluttered up to his throat. Another boy sat next to her, and a girl just behind, peeking over her shoulder. “Never did learn his manners,” she said. “Not like wee Kevin here.”

Kevin looked about Billy’s age, but his clothes were different. Not like Michael’s, but still strange. Still somehow . . . wrong. Billy couldn’t think why.

“Hello,” Kevin said. He lifted his small hand and waved. Billy waved back.

“You can play with me,” Kevin said. He smiled.

The little girl peered over the old lady’s shoulder, her blonde hair catching the sunlight. “What games do you know?” she asked.

Billy hesitated for a moment before counting on his fin- gers. “Ring-a-ring-a-rosies, hide and seek, tig—”

“I like tig.” She stepped out from behind the old lady. Her clothes looked normal, not olden days clothes, and Billy knew her face.

Want more terror? Sign up for The Lineup's newsletter and get our scariest stories delivered straight to your inbox.

He thought hard about it for a few seconds before he remembered where from. The image formed in his mind. Mum at the kitchen table reading the newspaper, crying. Was it last summer or the one before? Billy had climbed up into her lap and looked at the newspaper while Mum wrapped her arms around him. Her cheek was warm and damp against his neck. She smelled of apples.

There was a picture of a little girl in the newspaper. Billy traced the headline with his finger, saying the words out loud. He didn’t get very far before he had to ask his Mum what some of them said.

The girl walked to the water’s edge and put her hands on her hips. “Who’ll be It?”

Michael sprung to his feet. “Me!”

The old lady laughed. “So, you’re not too big to play after all?”

Billy’s heart drummed in his chest. He looked back up the bank to where the trees heaved and whispered. The houses of Ballinahone stood just beyond them, and Orange- field, where he lived, just beyond that. Mum would have lunch ready soon. Jam sandwiches. Playschool would be on TV, and cartoons a bit later. Scooby-Doo. He never missed Scooby-Doo.

But he could play Tig for a little while. Mum might be cross if he was late for lunch, but he’d say sorry, and she’d give him his jam sandwiches anyway.

Michael crouched, his hands forming claws, bearing his teeth. “Ready or not,” he said.

Want to keep reading? Subscribe to Creepy Crate now for your chance to receive a copy of The Traveller and Other Stories!

This post is sponsored by Soho Press. Thank you for supporting our partners, who make it possible for The Lineup to continue publishing the spooky stories you love.