Lost at Sea: The 85-Year-Old Mystery of the SS Morro Castle and its Fiery Demise

Was it a terrible accident, or something more sinister?

Christened in 1930, the SS Morro Castle was one of a pair of passenger and cargo liners designed by Naval architects for the Ward Line. Both the Morro Castle and her sister ship the SS Oriente were designed to hold 489 passengers and 240 crew. Named for the stone fortress that stands vigil over Havana bay, the Morro Castle was built to carry passengers from New York to Havana, Cuba—which was a popular stop during Prohibition.

On the morning of September 8, 1934, the Morro Castle caught fire and burned off the New Jersey coast. The devastating blaze killed more than a hundred people. But was it a terrible accident, or something more sinister?

By the morning of September 7, the ship was sailing alongside the coast of the United States and encountering increasing clouds, intermittent rain, and wind—the beginning of a savage nor’easter. While the weather drove many passengers into their berths, the storm would prove to be the least of the dangers facing the Morro Castle.

On the evening of September 7, Captain Robert Wilmott, who had been the captain of the Morro Castle through all her years of voyaging, asked for his dinner to be served in his quarters. Shortly thereafter he complained of stomach trouble and died, leaving Chief Officer William Warms in charge of the ship.

Want more maritime mysteries? Sign up for The Lineup's newsletter, and get the eeriest stories delivered straight to your inbox.

Early in the morning on September 8, off the coast of Long Beach Island, New Jersey, fire broke out aboard the SS Morro Castle. The fire is thought to have begun in a storage locker, but it spread with an almost uncanny swiftness, and within half an hour the ship was engulfed in flames. Unfortunately for the passengers and crew on board the ship, that crucial first half-hour was spent in delay and confusion, and by the time the ship’s SOS was sent, it was already too late to save the Morro Castle or many of her passengers.

The ship lost power within 20 minutes of the fire’s discovery, curtailing any further efforts to call for help. The confusion that resulted from the unexpected death of the captain was compounded by the darkness, the storm, and the panic caused by the fire, effectively hampering any efforts to evacuate the ship, while rescue efforts from nearby ships were slow in coming. Of the ship’s dozen lifeboats, only six were ever launched, and few of those were filled to capacity.

Related: Are You Brave Enough to Spend the Night Aboard the Haunted Queen Mary?

By the middle of the morning, everyone on board the Morro Castle had either jumped overboard, been rescued, or perished, and the smoldering hull of the ship beached itself near Asbury Park, New Jersey, at almost the exact spot where the New Era ran aground 80 years earlier. The fire continued to burn for the next two days. In the end, at least 134 people died in the flames or the freezing water of the Atlantic.

The burnt wreck of the Morro Castle became a tourist attraction in the region over the ensuing months, and the disaster left behind a substantial legacy. Fictionalized versions appeared in films and television, and inquiries into the cause of the fire led to improvements in fire safety aboard ships. The wreck of the Morro Castle also left behind something else: a mystery.

What was the cause of the fire? Was it a simple accident, or was it arson? And did it have something to do with the death of Captain Wilmott? While the mystery officially remains unsolved, evidence gathered in the years since the disaster paints an increasingly sinister picture. Prior to his death, Captain Wilmott had been behaving differently during the Morro Castle’s fateful trip, and he is said to have confided in some of his officers that he believed someone on board was out to murder him and damage the ship.

That person may just have been chief radio officer George White Rogers. While Rogers initially appeared to be a hero in the wake of the disaster—being among the handful of crew members who stayed on board the Morro Castle until all the passengers had been evacuated—he later became a suspect, not only in the arson of the ship, but in the possible murder of Captain Wilmott.

Related: The Vanishing Crew of the Carroll A. Deering: A Maritime Mystery

In spite of his celebrity in the wake of the disaster, Rogers’ life after the wreck was a strange one. He ultimately got a job as an assistant in the radio room of a local police department, where he was later convicted of the attempted murder of his supervisor with a bomb after said supervisor began to suspect that he may have been responsible for the fire on board the Morro Castle.

Released from prison in 1942, Rogers was arrested again in 1954 and convicted of the murder of his friend William Hummel—to whom Rogers had owed large sums of money—and Hummel’s daughter. Rogers died in prison, and with him whatever secrets he still carried about what happened that night aboard the Morro Castle.

But thanks to interviews with survivors, rescuers, and investigators, authors Gordon Thomas and Max Morgan Witts have compiled as thorough an account of the events of the Morro Castle’s final voyage as possible, to finally lay the mystery of its fate to rest in their Edgar Award-nominated book Shipwreck: The Strange Fate of the Morro Castle.

Want to keep reading about the enduring mystery of the SS Morro Castle? Download Shipwreck. 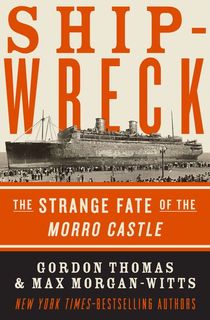