This Building is Haunted by Death...

Can its latest victim solve her own murder?

Kaela’s been hiding for a long time. After the end of a marriage, she’s taken to a new apartment… and barely left it since. She primarily occupies her time volunteering with a crisis hotline, where she can feel she’s making a difference.

But when a caller asks for Kaela by name—her real name, not the one she’s been using for the last few months—it’s clear that something has gone wrong. That becomes even clearer when Kaela is murdered amidst a power blackout in her building. Her spirit remains tethered to her building and the elevator she was slain in.

In the following excerpt, Kaela begins to test the waters of her spiritual afterlife—can she leave Thorwald Place? What ties her to the world despite her death? Who, exactly, killed her? These are the questions readers of The Ghosts of Thorwald Place will be dying to explore.

Related: 21 Haunted House Books That Will Leave You Sleeping with One Eye Open

The Ghosts of Thorwald Place is one of two books included in the October/November Creepy Crate. Subscribe now for your chance to receive a copy with your Crate!

Read on for an excerpt of The Ghosts of Thorwald Place.

The Ghosts of Thorwald Place 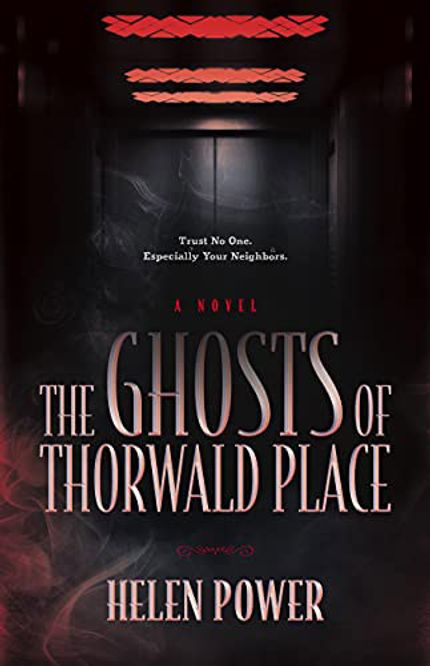 It takes forever for someone to find my body. At six, the elevator is called to the fourth floor, and an early riser greets the sight of my body with a shrill scream. He stumbles backward, clutching his briefcase to his chest. I get the impression that he’s never discovered a grisly crime scene before. I, on the other hand, am enveloped in the cool indifference that seems to accompany death.

He staggers back to his apartment, shrieking hysterically all the way. Several of his neighbors rush out into the hall. Each person is in various stages of undress. A pregnant woman wearing a silk bathrobe and only one slipper. A man whose face is coated in shaving cream, save for a single bare strip down his left cheek. The look of horror on their faces would have been amusing if I were in the mood for dark humor. The elevator doors slide shut, and I am launched to another floor, where I startle another early commuter. The elevator doors close on the stunned woman’s face, lurching towards its next stop. I’m destined for repetition. Perhaps this is hell.

Related: The Next Terrifying Book to Read Based on Your Favorite Horror Trope

The police finally arrive, call the elevator to the ground floor, and put it out of service. I have now informally met a quarter of the building’s occupants, which is more than I met in the two years I lived here. A handful of police officers form a perimeter, trying to block the sight of my corpse from the prying eyes of my nosey neighbors. I hover by the elevator door as forensic investigators get to work examining my corpse. I try not to watch—disgusted by the sight of my limp body, which is coated in blood that has begun to cake —but the process is mesmerizing. The flash of cameras, the murmur of voices, and the hypnotic movement of pencils as they scribble in pristine white notebooks. The forensic experts step gingerly around the scene, careful not to disturb anything as they scrutinize my body from all angles. As they work, I can’t stop staring at my face. My eyes are still open and glazed over with a milky white sheen. My skin is nearly white, a shocking contrast to the deep crimson gash across my neck. My lips are parted in a soundless scream. A forensic investigator in a white body suit steps in front of me, cutting off my view. Relief floods through me, and I turn away before the sight of my own corpse enthralls me once again.

I know I gained consciousness only minutes after my death, because blood was still dripping where the arterial spray arched across the walls, looking as if an artist had decided to add a splash of color to the monochromatic grey. I was reluctant to leave my body, but I had no idea what else to do. I had no moment of shock, no moment of revelation where I realized I was dead. I knew it from the instant I opened my eyes and saw the world from the other side. A world which looks different in death. Everything is a little grayer, a little faded. Voices and sounds have a slight echo. It’s as though I’m experiencing everything through a thin film, some indescribable substance that separates the world of the living from mine.

But why am I still here? My body has been found; the police are clearly investigating. It won’t take long for them to figure out it was He who killed me. I leave the elevator and glance around the lobby. I don’t see any obvious doorways or bright lights to follow. How will I know where to go? I bite back the pang of disappointment when I realize that none of my lost loved ones are here to welcome me. No husband. No parents. No Grumpelstiltskin, my childhood dog. Where are they, and how do I find my way to them?

I’m self-aware enough to know that I’ve always feared the unknown, and it’s obvious that this hasn’t changed in death. Instead of searching for my escape, I stay locked in place, eyes glued to the crime scene investigators. After what feels like an eternity, the medical examiner deposits my body into a black bag and wheels it out of the building. I begin to follow. Maybe if I slip back into my body, I’ll awaken, and everyone will laugh, like this was all just one big misunderstanding. I’ll spend the rest of my days wearing a scarf, elegantly positioned to hide my gaping neck wound, like the girl in that urban legend.

I slam into an invisible wall about a dozen feet from the elevator. Slightly disoriented, I shake my head. I press forward. Again, I’m stopped by an imperceptible force. I reach out and my hand flattens mid-air. I run my hand along this invisible barrier, but it seems to run as high as I can reach, and down to the marble floor. I follow the barrier, tracing my hand along it. It cuts across the entire lobby, but not in a straight line. It’s slightly curved. Beyond the wall, I can see the medical examiner exit the building with my body, leaving my soul behind. I slam a hand against the invisible wall once again, but there’s no give.

My attention is drawn by the sound of a familiar grating voice. Elias Strickland, the concierge, is speaking with a police officer who looks like he’s desperate to leave. The invisible wall can wait. I approach the pair to eavesdrop.

“We have excellent security here,” Elias says. His perpetually nasal voice is exacerbated by the tears that stream down his face. “How could this have happened? My residents will want an explanation immediately.”

“We have someone reviewing the security footage of the exits. If the killer left the building, we’ll have him on film,” the police officer says.

“If he left the building? Are you saying he might still be here?” Elias tugs at his cheap tie.

The killer might still be in the building. I look around and notice for the first time that the residents aren’t allowed to simply leave. Police officers guard the front door, questioning each individual before they allow them to go to work or to the spa, or to do whatever that is more important than mourning my death.

“What can you tell me about the victim? Ms. Rachel Anne Drake?” the police officer asks.

“Well . . .” Elias runs a hand through his thinning brown hair. “She is—was—an odd one. She rarely spoke to anyone. She kept to herself. I think I was her only friend in the building.”

I stare at him, just now realizing that the tears streaming down his face are for me. I feel a pang of guilt. I’ve never considered us ‘friends.’ I interact with him once every few weeks—only when I have mail to pick up or complaints about the security guards.

Elias continues, “She even had her groceries delivered. I haven’t seen her leave the building in months.”

The police officer suddenly looks interested. He pulls a small wire-bound notebook from his pocket and uncaps his pen. “Do you think it’s possible that she may have been hiding from someone?”

Related: When Does Fantasy Become Horror?

“Possibly . . . She was always really interested in the security in the building. Like that was the main reason why she moved here, not the fabulous party room or the services I provide as concierge.” I wince in pity as he says the word with a dreadful French accent. He should have picked a line of work that he could pronounce.

“Did she have any visitors?”

“There was a man who used to come around, but I haven’t seen him in a few months,” Elias says. At the police officer’s prompting, he continues on to describe him. I realize he’s talking about Luke.

The police officer asks a few follow up questions, and I’m surprised by just how much Elias knows. He knows the date and time of my weekly grocery deliveries, that once every couple of weeks I’ll treat myself to pizza delivered from the greasy place down the street, and that I get a haul of books delivered every time BMV Books has a sale.

“Well, if you think of anything else, please contact us immediately.” I peer over the police officer’s shoulder to look at the scribbles in his notebook, but he’s used a shorthand that I can’t decipher.

A nearly identical police officer emerges from the secu# rity oce, holding a flash drive. He glances at the concierge, then turns to his partner, and begins speaking rapid French.

“The video doesn’t show anybody leaving the building between one and two this morning. But, apparently there was a power outage for about five minutes, and he could have left during that window.”

“No! That power outage happened before I died. The power came back and then he killed me.” I blink and glance around. I hadn’t thought I’d be able to speak.

It makes no difference. Neither police officer reacts to the sound of my voice. I look at Elias, but he’s watching the officers intently. I turn my attention to the rest of the people milling about, but none of them seem to have heard me either.

Want to keep reading? Sign up for Creepy Crate now for your chance to receive a copy of The Ghosts of Thorwald Place!

This post is sponsored by CamCat Publishing. Thank you for supporting our partners, who make it possible for The Lineup to continue publishing the creepy stories you love.