Vanessa Brown's in-depth examination of the unsolved slayings in the "Serial Killer Capital" will leave you with chills.

London, Ontario may be best known to Americans as the birthplace of Justin Bieber, but its history isn’t limited to pop icons of the 21st century—it’s also been called the world’s serial killer capital.

In The Forest City Killer, author Vanessa Brown investigates some of her hometown’s most infamous crimes—the killings ascribed to one man, who remains unidentified to this day. Back in 1969, a rash of killings swept through London, Ontario, terrifying residents and putting the city on edge. Perhaps the most infamous murder in the spate of slayings was that of Jackie English, a vivacious 15-year-old.

English’s case remains unsolved to this day. In the below excerpt, Brown reconstructs the final day of the teenager’s life. The Forest City Killer, a thrilling cold case investigation that will please true crime fans of any color, is one of two books included in the upcoming June/July Creepy Crate. Subscribe for your chance to receive a copy.

Read on for an excerpt of The Forest City Killer, then subscribe to Creepy Crate to get your copy! 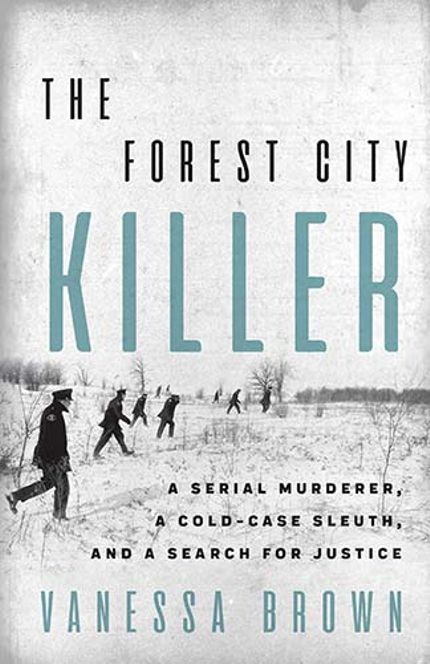 OCTOBER 4, 1969. Jackie woke up late that Saturday in her apartment on Kent Street. After breakfast, she put on a pretty dress, the one with a bold black-and-white checkered skirt. She arranged her hair with her signature kiss-curls at her cheekbones. Slipping on her brown leather penny loafers, she went around the block to David’s place at noon. Inside his apartment, she casually lounged and listened to records with him, flirted, perhaps necked. She asked him to go with her to visit her mom in the hospital; Doris had been admitted for surgery. They got on the bus and went to St. Joseph’s Hospital around 2 p.m. Up in the shared ward room, Jackie sat down to chat with her mom, who lay in a hospital bed. The big old windows bathed the room with light. Doris later remembered thinking that her daughter was out of sorts. She said that Jackie didn’t want to go to work at the Metropolitan that night, but she encouraged Jackie to go anyway. Doris said Jackie had a responsibility to show up and follow through on her commitments. Otherwise, their visit was uneventful. Jackie said goodbye to her mom one last time, took David’s hand, walked down the hallway, and stepped onto the elevator.

Later on, David didn’t recall any of the conversation between Jackie and Doris; Jackie didn’t seem upset to him. It’s possible that Doris’s memory changed after Jackie’s disappearance, as she tried to make sense of what had happened to her daughter.

Outside it was a beautiful sunny day, very warm for October. The busy downtown corridor of Richmond Row was littered with shoppers and pedestrians. Walking among them was the young couple, holding hands and making each other laugh. The air, the empty afternoon, let them fall into lazy happiness. They listened to more records in his apartment, and David Papple would later tell police they had sex — awkward youthful sex with no protection. Afterwards, wrapped in his arms, Jackie talked to him about getting married. She had told a friend that she secretly hoped he would give her an engagement ring for Christmas.

Want more true crime? Sign up for The Lineup's newsletter, and get our most terrifying stories delivered straight to your inbox.

He had to work at 4:30 p.m., but Jackie promised she would be awake when he finished his shift. He should come over to her place and get her. They went to the back parking lot where she kissed him goodbye.

After David left for the Latin Quarter restaurant kitchen, Jackie ran into Paul St. Cyr. Paul worked for Johnny Downs, doing handyman work and odd jobs at Downs’s various properties. That day, he was washing Johnny’s station wagon. Paul was happy that Jackie stopped to talk to him. They’d spent a lot of time together since she started working at the Latin Quarter, but for the past week, Jackie hadn’t been as friendly, and he wanted to know why.

“Are you going to get married?”

“When he makes up his mind,” she replied, hopefully.

Related: 11 Gripping True Crime Book Bundles to Keep You Occupied While We Shelter in Place

Paul asked Jackie if she wanted a ride to work. She turned him down, saying she had a ride, but a neighbour saw her leave in a cab a few minutes later. Perhaps she just didn’t want to get a ride from Paul. She knew he didn’t approve of her relationship with David, and maybe she didn’t want to hear any more about it.

It was a busy night at the Metropolitan. The Leighton Ford Crusade, a religious event, was winding up at the London Gardens Arena next door, bringing extra crowds. Saturday nights were busy anyway, as folks blew off steam by going shopping after a long workweek. Later, customers and employees would be asked to find significance in what they saw and heard. Mrs. Margaret Magee, a friend of the English family, was there with her sister and their kids. She saw Jackie around 8 p.m., but said that they didn’t speak.

Linda Hurst was working with Jackie in the restaurant. She told Alsop that Jackie wasn’t herself at all that night, and she hardly spoke to the other waitresses or smiled at the customers. They were busy, running off their feet. In between all the hustle and bustle, Linda got the impression that young Jackie English had something on her mind. Of course, this could also have been an interpretation of events made in hindsight. People often reach for ways to make narrative sense out of tragedy.

When the restaurant closed at 10 p.m., the staff wrapped things up for the night. The tables were wiped, the chairs stacked. Most of them would drive home or catch a lift with a friend, leaving in droves. Headlights stretched across the white exterior of the building as cars pulled up and pulled away, leaving the parking lot empty very quickly.

Taking the bus was a real hassle. You see, the Metropolitan was about as far on the edge of town as you could get. It was abandoned, dark, and isolated at night. The lonely bus stop was on the other side of the highway, across the overpass extension of Wellington Road, and even when you got to the intersection of Wellington and Exeter Roads, the sparse route serviced the stop twice an hour at best. Missing the bus meant standing around in the cold for a long time. If you decided to try to make it across the highway in time, walking in the yellow glow of streetlights, your footsteps would echo across the expanse of the asphalt parking lot and then disappear into silence as you stepped on the roadside grass. On the overpass, the din of cars whipping by on the 401 would make it necessary to shout even to a walking companion right next to you. It was windy, with no trees to break up the gusts of cold October air. Taking the bus was uncomfortable, something to be avoided, but that night, it appeared to be Jackie’s only option.

Want more true crime? Sign up for The Lineup's newsletter, and get our most terrifying stories delivered straight to your inbox.

Alsop recorded multiple eyewitness accounts of the last sightings of Jackie as she left work that night. Consistent information was that she wore her uniform, white with orange stripes down the front, and carried her black-and-white checkered dress over her arm. She had on her new grey coat, pantyhose, and brown penny loafers. Her purse was beige camel with a shoulder strap.

There was also an anonymous witness who called the London Police on October 15, almost a week after Jackie’s body was found. He said that around 10:25 that night, he was driving northbound on Wellington Road when he observed a light blue Ford product car make a U-turn in front of him and head south on Wellington Road. He described the occupants as one male driver and one female.

Want to keep reading? Sign up for Creepy Crate, and you may receive a copy of this chilling cold case.

This post is sponsored by ECW Press. Thank you for supporting our partners, who make it possible for The Lineup to continue publishing the horror stories you love.