Her overt fear of water, the fact that she was found in her nightgown, and an argument between her husband and alleged lover raised more questions than answers.

Promoted by Open Road Media | By The Lineup Staff

On the night of November 28, 1981 off the coast of California’s Catalina Island, Natalie Wood—known for her screen roles in Miracle on 34th Street, Rebel Without a Cause, and West Side Story—was aboard her yacht Splendour with fellow actors Robert Wagner, her husband, and Christopher Walken, the man she was alleged to be having an affair with. Wood’s body was found floating offshore at 7:45 a.m. the next day, but no one knew how she drowned.

In 2011, 30 years after Wood's death, the case was reopened. But investigators say that Wagner has refused to speak with them since. Still investigating Wood's mysterious death in 2018, they told 48 Hours that Wagner is now a person of interest in the case.

A classic case of he-said, she-said has spiraled into a web of lies circulating the circumstances of her death, leaving everyone to wonder: “Who knows the truth?”

Read on for an excerpt from Goodbye Natalie, Goodbye Splendour, and then download the book. 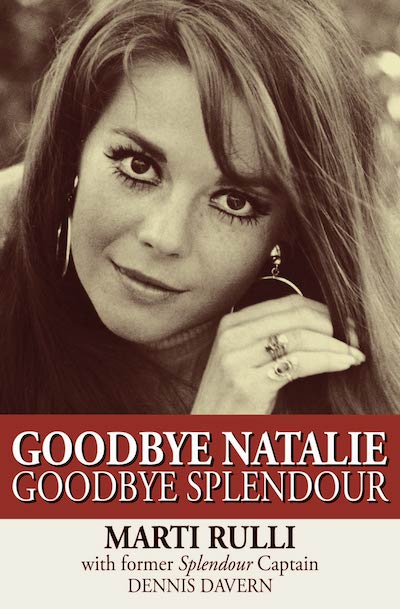 AVALON, Calif. (UPI)— The body of actress Natalie Wood was found floating Sunday in a shallow lagoon off Santa Catalina Island, where she was spending the holiday weekend with her actor husband Robert Wagner, authorities said.

County lifeguards and sheriff’s deputies said Miss Wood, 43, apparently drowned accidentally. Coroner’s officers investigated the scene and the body was flown back to Los Angeles where an autopsy will be performed. Miss Wood, a brown-eyed beauty who starred in West Side Story and Rebel Without a Cause, was found fully clothed about 200 yards offshore at the base of a small cliff at 7: 45 AM PST officials said.

The actress and her husband had sailed to the island 26 miles off the coast from Los Angeles on their yacht, and had been celebrating the holiday weekend with friends. Wagner returned to his Beverly Hills home after positively identifying his wife’s body. He was joined there by Elizabeth Taylor and Roddy McDowell.

Wagner issued a statement through his attorney, “Mr. and Mrs. Wagner had dinner last night in a restaurant on the Isthmus on Catalina Island,” attorney Paul Ziffren said, “after which they returned to their boat—the Splendour.”

“However, when she did not return in 10 or 15 minutes, Mr. Wagner took his small cruiser and went to look for her. When this proved unsuccessful, he immediately contacted the Coast Guard, who then continued the search and made the discovery early this morning.”

A Coast Guard spokesperson said they received a call at 3: 20 AM notifying them that Miss Wood was missing. Other witnesses said Miss Wood had been celebrating with friends Saturday night when she wandered off by herself about 1 AM PST, said Lt. Gary Crum of the County Lifeguard Department. The friends grew concerned and notified lifeguards about 5: 15 AM, he said.

The body, clothed in a dress and red jacket, was discovered floating just under the surface of the lagoon in an area that a county lifeguard said was inaccessible by foot. The temperature of the water was about 57 degrees. A small inflatable boat equipped with an outboard motor was found near the body.

Granted, the report was but a day removed from the tragedy, but the article failed to mention that Natalie’s “dress” was a nightgown. Nor did it correctly report who had identified Natalie’s body— important details that went unverified and were erroneously reported on the front pages of newspapers worldwide. Readers were fed the subliminal image of a devastated Robert Wagner bearing the torture of identifying his wife. The article painted a picture of Natalie socializing with friends, then wandering off and disappearing, her worried friends deciding more than four hours later to call for help.

But Paul Ziffren, who as Wagner’s attorney certainly must have scrutinized his client’s words before relaying them to the press, presented a different picture: Robert Wagner, within 15 minutes of discovering Natalie was not in their stateroom, frantically racing around in his small boat to look for her. It seems safe to assume that Ziffren did not invent the details he provided to the press.

Robert Wagner wanted the world to believe that Natalie Wood, who just weeks earlier had told the New York Daily News, “I’m frightened to death of the water … I can swim a little bit, but I’m afraid of water that is dark,” went unprovoked to the dinghy in the dark of the night, in the cold rain, dressed in jacket, nightgown and socks, untied the dinghy, tried to board it, and fell silently into the water to her death.

Wagner’s explanation went unquestioned by all media institutions except the tabloids. The tabloids wanted to know: What husband would not immediately be concerned upon noticing his wife is missing, especially from a boat? What husband would not be terrified—and would not immediately seek assistance? Wagner’s “knowing nothing” was further puzzling because it seemed all the more reason to have acted immediately rather than to forestall a call for help, but it worked in his favor by serving as an acceptable excuse for having delayed a professional search.

Los Angeles Coroner Thomas T. Noguchi had headed up Natalie’s autopsy. Noguchi had joined the Los Angeles County medical examiner’s office in 1961 and was the county’s chief coroner from 1967 to 1982. In 1982, the county Board of Supervisors decided that Noguchi’s ego interfered with his professionalism, and he was forced from his position. Noguchi had earned the nickname “Coroner to the Stars” for his high-profile autopsies and investigations of celebrity deaths, including those of Marilyn Monroe, Robert F. Kennedy, Sharon Tate, Janis Joplin, Freddie Prinze, and William Holden.

Related: 5 High-Profile Celebrity Deaths That Are Still Shrouded in Mystery

In an ironic twist of fate, Holden, who was Stefanie Powers’s companion, had died two weeks before Natalie Wood. Powers—Robert Wagner’s friend and co-star in their hit show Hart to Hart—had just been consoled by Wagner as she grieved for Holden. Holden’s body had been found by a building worker in Holden’s Santa Monica apartment on November 16, 1981, after Holden was presumably dead for days. Toxicology reports showed Holden’s blood alcohol level at 0.22 percent, more than twice the legal driving limit. Noguchi publicized that Holden, drunk, had tripped on a rug, hit his head on a teak bedside table, and then passed out and bled to death. Noguchi had taken a verbal beating for publicly announcing his findings. Some celebrities, Wagner and Powers among them, felt that the unpleasant, personal details of Holden’s death should have been withheld.

Two weeks later, Noguchi had Natalie Wood’s death to answer for, and he ruled the death accidental, claiming Wood must have untied the dinghy, slipped, hit her head, and then fallen into the water and drowned. Although he left it undetermined why Wood untied the dinghy, he released a report of an argument between Christopher Walken and Robert Wagner that may have prompted Wood to leave the boat. The evidence upon which he based his speculation of an argument was not made public. His office quickly modified the statement when homicide detective Roy Hamilton said, “I don’t know where the coroner got that information. We talked to Wagner and Walken, and there was no indication that there was any argument. I think he (Noguchi) was juicing it up a little bit.”

Questions blared in concerned minds: Why would Natalie, dressed in a nightgown, leave Splendour so late at night on a remote part of the island?

Four weeks after Natalie’s death, to explain her manner of dress, Wagner’s theory was publicly offered that perhaps the dinghy was banging on the side of the boat, keeping Natalie awake, so she tried to secure it and slipped from the swim step into the water. Natalie’s jacket must have weighed her down.

That theory raised yet more questions.

Featured still of Natalie Wood from "Splendor in the Grass" via Warner Bros.