Decades later, the question remains: Who pulled the trigger?

In 1981, in the tiny farming town of Skidmore, Missouri, Ken McElroy was gunned down in broad daylight in the middle of the town’s main street. McElroy's murder took place in front of as many as 45 witnesses. More than three decades later, the murder remains unsolved.

Related: Phantom Killer: The Unsolved Mystery Of The Texarkana Murders

The town, which sits in the northwest corner of Missouri about a hundred miles from Kansas City, had a population of around 440 people in 1981, and just about all of those people knew Ken Rex McElroy. He was known as the “town bully”, a big man with bushy sideburns and cold eyes who carried a gun and had plenty of money, even though he rarely worked.

In the years leading up to his murder, McElroy was charged with more than 20 crimes, including arson, assault, burglary, cattle rustling, child molestation, and statutory rape. Yet he was never convicted. Years later, McElroy’s attorney recalled that he typically defended McElroy in “three or four felonies a year.”

McElroy was born in 1934, the 15th of 16 children to poor, migrant tenant-farming parents. Eventually, he dropped out of school at 15 in the eighth grade–and shortly thereafter became known as a delinquent throughout Skidmore.

Rather than find a stable job, he began hunting raccoons, which in turn led to petty crimes. McElroy established himself as a cattle rustler and small-time thief—but his penchant for crime would quickly grow more severe. Over the next two decades, McElroy was suspected of stealing grain, gasoline, alcohol, antiques, and livestock. Although charges related to these crimes and statutory rape allegations were brought against him some 21 times, McElroy always got off scot-free. Likely, this lack of consequences had something to do with the allegations made by witnesses that McElroy would intimidate, stalk, and harass them before his crimes went to trial.

Related: Is Charles Manson Behind The Unsolved Murder Of Reet Jurvetson?

McElroy had four wives and more than 10 children. Trena McCloud—McElroy’s last wife—was only 14 when she became pregnant with his child and dropped out of school in the ninth grade. At the time, McElroy was still married to his third wife, Alice Woods. Regardless, he moved McCloud into their house.

Want more true crime? Sign up for The Lineup’s newsletter and get our creepiest cases delivered straight to your inbox.

McElroy then divorced Woods and married McCloud to escape charges of statutory rape. Clearly, by the time McCloud gave birth to McElroy's child, any illusions she may have had about the man were swept away. She and Woods fled McElroy's home and returned to her mother's house.

McElroy was unflustered. He simply went to the house and forced McCloud and Woods to return. He then went to the McCloud home while McCloud’s parents were away, shot the family dog and burned the house down. In June 1973, McElroy was indicted for arson, assault, and statutory rape. He was arrested, booked, arraigned, and eventually released on $2,500 bail. Both McCloud and her child were placed in foster care.

Related: The Horrific Case of Lauria Bible and Ashley Freeman

On July 1976, McElroy shot Skidmore farmer Romaine Henry twice with a shotgun after Henry confronted McElroy for shooting weapons on his property. McElroy was charged with assault with intent to kill. Despite Henry's own word in the case, McElroy vehemently denied being at the scene. As the case dragged on without a court date, Henry claimed that McElroy parked outside his home at least 100 times. During trial, Henry’s own petty criminal conviction was discovered from 30 years before. Between this and an alibi McElroy was able to rustle up, the town bully was once again acquitted.

In 1981, McElroy’s mean streak went beyond bullying and violence to attempted murder. The attack concerned a local grocer, 70-year-old Ernest “Bo” Bowencamp, and a piece of candy that Bowencamp’s wife had accused McElroy’s daughter of shoplifting. Unwilling to let the matter drop, McElroy harassed the Bowencamps, leering at them from his pickup while parked outside their house and occasionally firing his shotgun into the air. Finally, McElroy approached the grocer while he stood on the loading dock behind his store and shot him.

Bo Bowencamp survived the attack, but the town had had enough. David Baird, the newly-appointed prosecuting attorney for Nodaway County, managed to get the first-ever conviction against McElroy in the shooting of Bowencamp, but a judge released him on bond while awaiting appeal. McElroy's first move after being freed? He went to the D&G Tavern carrying a bayonet attached to an M1 Garand rifle. While sitting in the bar, McElroy began telling those around him exactly what he planned to do to Bowencamp–and none of it was pleasant.

But McElroy never got the chance.

Many patrons were alarmed and decided to see what they could legally do to prevent McElroy from harming anyone else. Nodaway County Sheriff Dan Estes came up with a possible solution: The town could form a neighborhood watch. On July 10, 1981, townspeople met at the Legion Hall in the center of town to discuss with Sheriff Estes how they could protect themselves.

Later that same day, McElroy and his wife Trena drove into town in his pickup and returned to the D&G Tavern. Soon, word trickled over to Legion Hall–McElroy had arrived. Although the sheriff attempted to dissuade citizens from directly confronting McElroy, a large group filtered over to the bar.

McElroy leisurely finished his drink, even as the bar filled up around him. Despite the baleful stares of his neighbors, McElroy purchased a six pack and casually left the bar. He and wife Trena climbed in and fired up the truck, then paused to grab a cigarette. That’s when shots rang out.

Though the crowd assembled in the town’s main street that day has been estimated at anywhere from 30 to 60 people, no one called an ambulance, and no one even turned off McElroy’s pickup. Once the shots subsided, the crowd simply walked away. McElroy was hit twice by bullets from two different guns, and there’s reason to believe more bullets were fired that missed their target.

In spite of a massive investigation by both local and federal authorities, and media attention from all over the country, not one person in Skidmore ever confessed to the killing or implicated anyone else. Numerous witnesses were questioned, and every one of them said that they never saw who fired the shots.

Three years later, McElroy’s wife filed a $6 million wrongful death suit against the town, the county, and several other individuals, including a local rancher named Del Clement, who Trena identified as one of the shooters. The suit was settled out of court for $17,600, without anyone admitting to any wrongdoing.

The Skidmore murder—and the subsequent silence of the townspeople—seized the attention of the country. The event was written up in newspapers all across America, and 60 Minutes ran a segment on the vigilante killing. In 1988, Harry MacLean vividly recreated the murder in his true crime investigation In Broad Daylight, earning him the Edgar Award in 1989. The book was made into a TV movie in 1991 starring Brian Dennehy, Chris Cooper, and Marcia Gay Harden.

Related: Mark Mangelsdorf: The Man Who Killed His Best Friend and Got Away with It for 24 Years

Today, the population of Skidmore has shrunk to a little under 300 people. The grocery store and school have both closed down. Other murders have occurred in surrounding Nodaway County since 1981—yet everyone knows that the murder of Ken McElroy, and the secret the town keeps, remain Skidmore’s deadly legacy. 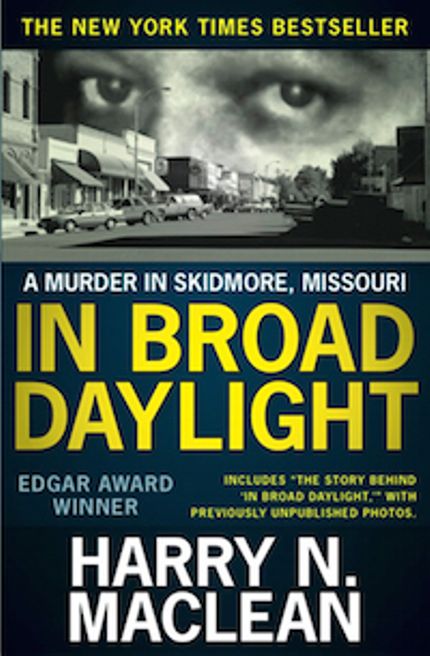 Special thanks to true crime author Harry MacLean, who generously provided the photos for this article. For more information on the Ken McElroy case, check out MacLean’s book In Broad Daylight on Amazon, Barnes & Noble, and iTunes.

Want more true crime? Sign up for The Lineup’s newsletter and get our creepiest cases delivered straight to your inbox.