This Excerpt of Ghostly Encounters Includes a Paranormal Audio Recording

Even if you’re skeptical on the topic, like I am, you’re likely still fascinated—always looking for proof. Skeptical yet intrigued seekers like us devour stories of first-hand contact and accounts of supernatural, unexplained experiences.

In Ghostly Encounters: Confessions of a Paranormal Investigator by Jeff Scott Cole with Johnathon Robson you will receive just that—and then some. A real-life ghost hunter, Jeff Scott shares his true stories of personal investigations of haunted sites.

Related: 16 Books About Haunted Places to Help Plan Your Next Vacation

Muffled voices in an empty attic, heavy footsteps on a vacant stairwell, silent shadows across a darkened room . . . The spirit world has intrigued Jeff Cole for a long time—which let him to switch from a career in archaeology to the work that actually interested him—paranormal investigation. In Ghostly Encounters, Cole shares his process and reveals his journey as he searches both famous and lesser-known haunted locales. Cole explores a wide range of reportedly haunted places, from Gettysburg to the Ohio State Reformatory, the Villisca Axe Murder house, St. Albans Sanatorium, and more. He divulges chilling first-person eyewitness accounts and includes testimonies from the various paranormal investigative teams he has worked with. His discoveries and encounters with the “other side” will fascinate and intrigue…and they’ll maybe even make you believe.

As a bonus, Ghostly Encounters also includes links to video and audio clips, so readers can enjoy a multimedia ghost-hunting experience.

Read on for an excerpt of Ghostly Encounters by Jeff Scott with Johnathon Robson, and then purchase the book. 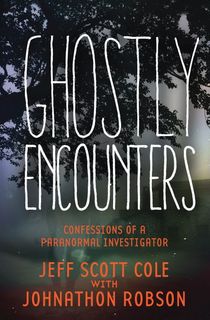 The date for the cemetery investigation arrived at last. Bob had provided specific instructions on when to arrive and where to park. Ironically, pulling into a cemetery after hours had its own peculiar feel. After all, I was running on faith and nerve; I had never met Bob. Though we’d talked on the phone a couple of times before the investigation, I still had no idea who this guy was or if he and his group were legit. As I drove to the location, I kept wondering, What if I’m the only schmuck to show up? What if I’m being punked? What if the cops follow me in and pull me out of my car and start asking reasonable questions like “What the hell are you doing here at this hour of the night? Can’t you read the sign; the cemetery is closed!” What if . . . what if?

Thankfully, I was the second person to arrive. Now if I got busted, at least I wouldn’t be going to the slammer alone. About fifteen minutes later, Bob himself arrived, and over the following thirty minutes, an assortment of twelve other people with flashlights, digital cameras, and voice recorders had gathered at the cemetery’s maintenance house.

Bob was a likeable guy and quickly put our minds at rest by explaining that his relationship with the city was ironclad, producing a document (on city letterhead) that acted as a permit, authorizing the investigation. He passed out copies of the document to team leaders in case law enforcement showed up while the groups were separated. This did a lot to calm my nerves, at least about the legal ramifications of being in a municipal cemetery after hours. I have since learned that trespassing on public and private lands for the purpose of ghost hunting is more common than people might think. Though I was indeed very curious about this kind of phenomena, I certainly wasn’t keen on spending a night in jail to satisfy that curiosity. At least with Bob’s document, I could concentrate without distraction on the real focus of the investigation: to observe, experience, and hopefully capture evidence of paranormal activity.

It was a beautiful late summer night: clear skies, bright moon, warm temperatures, and low humidity—giving the cemetery a serenity I didn’t expect. This was neither the macabre landscape my imagination seemed to want nor the cold, austere _eld of granite markers and tablets I’d expected. Instead, I found myself in a peaceful nocturnal environment. Well-thought out and maintained, it was organized like a small city with a series of paved parallel roads intersected by wide gravel paths. In the 40-foot x 300-foot rectangular spaces between the paths and pavement lay the neatly manicured gravesites of the interred.

Unlike the Jewish cemeteries I was accustomed to, where wreaths and mementos are not permitted, this cemetery allowed loved ones to place arrangements, artifacts, and vigil lights—small wax candles or solar powered lights—beside the headstones. Unfamiliar with this custom, I found the vigils really nice, comforting reminders of a lost loved one.

It was finally time to begin the investigation. We broke up into small groups with an experienced team leader in each group. I was fortunate to be partnered with Danielle, who had investigated the cemetery with Bob’s group once before. Along with two other newbies, we set off down one of the roads into the cemetery. Moving away from the blazing mercury-vapor lighted maintenance house, our eyes quickly adjusted to the silvery moonlight and ambient quiet of the summer night.

Related: 7 Haunted Graveyards Where the Dead Do More Than Lie Still

As we walked down the road toward the farther reaches of the cemetery,

Danielle told us about her _rst experience investigating the cemetery—of hearing whispered voices, disembodied moans and screams, and shadows that seemed to dart out from behind gravestones. As a single mother to a child with serious medical issues, she mentioned her affinity to the children who were buried there. She was, in fact, leading us to the gravesite of one child: little Lisa, who had died at the age of six in the early 1980s. During the previous investigation, Danielle heard a child’s laugh at Lisa’s gravesite, and she wanted to pay a quick visit to see if her spirit was still around.

The experience had clearly made a profound impression on Danielle. Like a family member expertly weaving around the markers, she knew exactly where she was going and brought our small group to Lisa’s final resting place—where a delicate porcelain angel held a twinkling LED light. After placing a small silk flower beside the headstone, Danielle attempted to engage the spirit of Lisa, warmly greeting her and reminding her of their last visit. Danielle introduced us as friends and began a short EVP (Electronic Voice Phenomenon) session, gently encouraging the little girl to laugh or say hello or tell us anything she wanted to. We heard nothing, and upon review of the audio, I detected nothing

Over the next four hours, I toured the grounds with Danielle and several other group members. Quickly overcoming the creep factor of being in the moonlit cemetery and gaining confidence, I even managed a couple of solo excursions, stopping in secluded areas and running my own EVP sessions. Overall, it was a neat, unique experience. Though there were a couple of times when we heard strange scream-like sounds, it was impossible to say whether the noises were paranormal. Since we were situated in the middle of a suburban neighborhood, the sounds could easily be attributed to cats, possums, or any of an entire cadre of natural causes.

Though the walk was a strange and memorable experience, my initial impressions were of disappointment. For all the hype and anticipation I fed into my own excitement, I found nothing of the experience to be out of the ordinary . . . besides being in a graveyard in the wee hours of the morning. There was nothing that my logical mind perceived as extraordinary and certainly nothing I would deem paranormal.

That is, until I reviewed my audio.

Between all the coffee and excitement, getting to sleep that morning was no easy feat. In retrospect, I didn’t appreciate how much physical and emotional energy these adventures can take out of you. Your senses are cranked to hear every little noise, feel every sensation. Then, of course, there was the walking: an “easy” five to eight miles of weaving, strolling, and wandering . . . constantly looking over your shoulder because you feel like you’re being followed, or taking a second look because you think you saw a shadow. It’s quite draining, which is why I waited a couple of days before returning to the audio recordings I made that night. I wanted to be fully awake, refreshed, and running on all cylinders.

First, let me say that contrary to what you might think or what you may have seen on television, audio review is not as simple and easy as it may seem. It takes time for your mind and hearing to adjust, then focus, on the soft subtleties of the most common EVPs (classified as Class B or C; more on these classifications later), which tend to be soft, almost imperceptible whisperings. Class A EVPs, though less common, are the nuggets of gold that keep investigators investigating.

Once adjusted to the audio playback and the natural sounds that my recorder had picked up (wind, the rustle of leaves in the trees, footsteps, even the creaking of my sneakers), I began noticing brief moments, audio fragments of weirdness—strange, inexplicable sounds like breaths and sighs. Then came the strangest thing I’d ever heard in my life: a freaky feminine moan. It was the weirdest, most exhilarating sound I had ever NOT heard.

I shouted, “What the hell was that?” when I heard it.

My mind raced back to the hunt and the exact location of the audio capture, which I remembered distinctly. I was with another guy at that spot and remarked about a name on a marker that, at first look, appeared to be the same as my own. As you can hear on the audio, I mention the similarity in name; then there’s a bizarre human moan, clear as day and clearly female. I couldn’t believe it; I’d caught my first EVP! Though the recorded sound lasts barely a second, its impact was profound. The paranormal bug had bitten me. The weird moan would be the first of ten solid EVPs I caught that night. What a rush!

Here are the best of the cemetery EVPs from my first foray into the paranormal. LISTEN HERE.

Poring over the audio evidence from the cemetery was really an eye-opening experience. The more I listened and focused, the more I seemed to hear—or thought I could hear—things that were not audible the night of the hunt. In time I came to learn of the phenomenon known as pareidolia: the imagined perception of a pattern or meaning where it does not actually exist, as in considering the moon to have human features. They can also occur in an auditory context.

Think of pareidolia as the images of Jesus that have been seen on everything from potato chips to screen doors. Our minds can often lead us to believe that we are seeing or hearing something that’s really not there. Though a skeptic might punch holes in some of the more marginal EVPs you have just listened to, the better EVPs, like the freaky moan, are far less ambiguous. Mysterious? Absolutely. Ambiguous? I don’t think so.

Want to keep reading? Click below to purchase your own copy of Ghostly Encounters by Jeff Scott with Johnathon Robson!