The Stairway to Hell in Tagus, North Dakota

If someone asked you where the stairway to Hell was, you’d probably think they were somewhere outside of the United States, right? You’d think it was in a more historical location with roots in religion, like Rome, wouldn’t you?

Well, legend has it that the stairs are actually in … wait for it … North Dakota. Yep, North Dakota, the prairie state, the heartland, houses the infamous pathway to Hell.

North Dakota is dotted with small towns that were once prosperous, but have now become ghostly and unpopulated. One such town is Tagus, which was founded in the early 1900s and is now mostly abandoned. If you visit, you won’t see a whole lot–just a few houses and a bunch of dilapidated structures.

However, the rumor is that there’s an old Lutheran church that was once a hotbed for Satanic worship. The church was burned down by vandals, but many have claimed there was a large upside-down cross, a mark of Satanism, painted on the front of the building. And underneath the church is where it’s said you can step right down into hell.

If you stand in the right spot, near where the church burned down, you can apparently hear the screams of those condemned to hell. 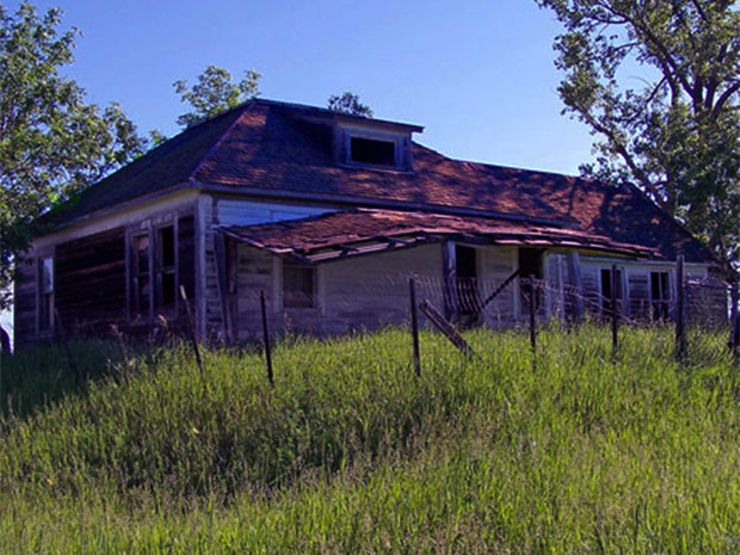 Now, I’m not so sure I believe any of this, but I am from North Dakota and these little tiny ghost towns can be spooky simply as they are. There’s something deeply unsettling about a town that is almost completely abandoned. What went wrong? What happened to the people who lived there? What was this town like when it was a thriving community? The ghosts of what was haunt every street and abandoned house.

According to the (amazing) website, Ghosts of North Dakota, the Tagus rumors are just rumors and the town’s reputation was carried on an urban legend that spread, and quickly. In the ‘80s, about 300 young people stormed the town intent on some Halloween fun, but a sheriff stopped their plans.

Whether or not the town is truly the entrance to hell, many people have commented on the Tagus post about things they’ve encountered while passing through.

Some visitors report being greeted by aggressive, barking dogs snapping at them, coming from seemingly out of nowhere. One visitor even reported blood from a ghostly dog on the side of their car.

The people who still live in Tagus aren’t thrilled with the town’s reputation, and some visitors have reported someone “chasing” them out of town in a car driving insanely fast. Others have noted people carrying guns and even shooting at cars.

One Tagus visitor reported a glowing, greenish gravestone, with no explanation as to why that individual’s grave would be lighted.

A translucent train has been said to chug up and down the old train tracks of Tagus. Creepy!

Others report strange sounds in old houses, or curtains blowing in a nonexistent wind.

Tagus is a little too farm from my home farm for me to drive over and explore, but though I’m skeptical of the stairway to hell, I definitely believe in ghostly activity in a little dying town. And if I were a Satanist church, I’d totally pick North Dakota as the place to plant. Did you know there’s a connection between my home state and the Son of Sam murders?