For over fifteen years, Billy Jensen worked as a true crime writer, fighting for victims' families as he examined unsolved murders and disappearances across the country. Yet every case he investigated reached the same conclusion: the missing stayed missing, the murderer got away. But after the passing of his close friend Michelle McNamara (author of I'll Be Gone in the Dark) and confronting the troubling slaying of Marques Gaines, Jensen took action. He was going to solve murders himself.

Jensen's gripping new book, Chase Darkness with Me, chronicles his journey from dogged true crime journalist to real-life cold case investigator—and it's a true crime read unlike any you've encountered before. Join Jensen as he harnesses social media to crack chilling cold cases and disappearances, from unmasking the Halloween Mask Murderer and tracking down a missing woman in the forests of California to investigating the only other killing that occurred in New York City on September 11, 2001. Jensen also offers an insider's look at Michelle McNamara's pursuit of the Golden State Killer and his own hunt for the Allenstown Four murderer. And for all the citizen sleuth readers ready to follow in the author's footsteps, Jensen concludes Chase Darkness with Me with tips, tools, and rules to help solve murders yourself.

SPECIAL NOTE: The Lineup will host a Facebook Live Q&A event with Billy Jensen on Tuesday, August 20 at 3:00 PM EST. Follow us on Facebook to see this special event.

Read on for an excerpt of Chase Darkness with Me, and then buy the book. 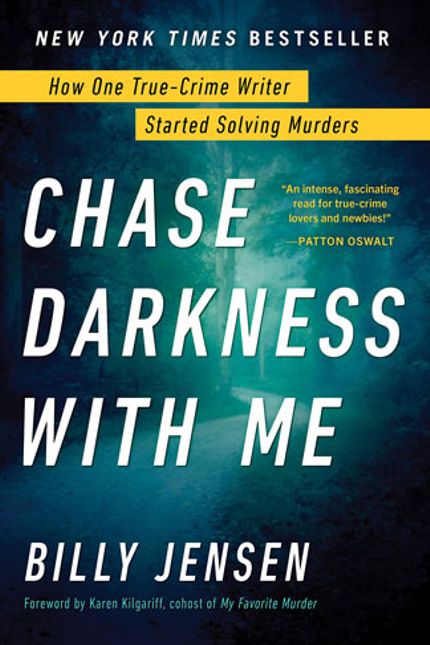 IT STARTS WITH AN OVERHEAD SHOT—IN COLOR, BUT WITH no sound—of a man walking into a 7-Eleven. It’s late, well past 2:00 a.m., but the scene is glowing, the streetlamps working with the store signs to give off a glimmer you don’t usually see on the typical nighttime surveillance video. The nearby bars—Henry’s, O’Callaghan’s, Howl at the Moon, and Mother Hubbard’s—are well beyond last call, and the street is a mix of those who don’t want the night to end and those for whom the day is just beginning.

As bright as the street is, your eyes squint as the video quickly switches to the glaring whiteness of the store’s interior. Inside, you see the back of a well-dressed man with close-cropped hair standing at the counter, purchasing what looks like a bag of chips from the store clerk. He motions to the customer to his left, and we see his face. He is handsome, but his eyes are tired, presumably from a long evening. He turns back to the clerk, completes the transaction, and walks out of the store and into the night.

The video then cuts to an overhead shot of the sidewalk, where a man wearing a green hoodie opens the door to the 7-Eleven. He is a big man, but you can’t make out his face. He is barely inside the store when a security guard who was manning the door on the sidewalk comes up behind him, says something that gets his attention, and performs the universal take-a-hike gesture with his thumb. The Man in the Green Hoodie does an about-face and skulks back to the sidewalk.

Moments later, you see the customer with his newly purchased chips exit the store. In a minute, you’ll learn the man’s name, when a caption flashes at the bottom of the screen. He is Marques Gaines, a bartender at the Chicago Marriott on Michigan Avenue. As Marques exits the store, the Man in the Green Hoodie steps in front of him. For the first time, you can see his face, a menacing brow perched over angry eyes and an angrier scowl. You can see him yelling. He gets in Marques’s face. He gets in the security guard’s face. He gets back into Marques’s face. Marques turns his palms up as if to say, “Why are you so mad?” then tries to walk away. The Man in the Green Hoodie follows him.

The video then cuts to a traffic camera across the street, and the images transform from a brilliantly lit close-up of animated humans to an overhead shot of grainy, pixelated ghouls. But you can still make out Marques and the Man in the Green Hoodie. You watch Marques walking quickly toward the crosswalk. Walking away from the confrontation, like everyone tells you to do. Just. Walk. Away.

But the Man in the Green Hoodie pursues him. Marques’s walk turns into a run. He takes three strides and then for some reason turns back around to face the man. The Man in the Green Hoodie hits him in the head with a crushing right hook, sending his body backward into the crosswalk. Marques is crumpled and unconscious before he hits the ground. As he lies on the pavement, two figures run into the frame from the opposite end of the street.

“Thank God,” you say to yourself as you watch the good Samaritans kneel down next to Marques’s motionless body. Your relief turns to horror and disbelief as they shove their hands into his pockets and strip them of their contents before getting up and fleeing down an alleyway. To the right of the frame, the Man in the Green Hoodie stalks away into the night.

A few seconds later, two taxicabs, one in front of the other, make right turns onto the street where Marques lies unconscious. The first one drives to the right of Marques’s motionless body, narrowly missing him. The next one drives directly on top of him, crushing his chest under two tons of automobile and killing him.

The rest of the video shows the aftermath. A close-up of people in the street. On the sidewalk, one man is in complete shock. Another takes out his phone, in all likelihood calling 911.

Marques Gaines’s life ended in the gutter. No one helped him until it was too late. Until they had to instruct the taxi driver to back up his car, slowly removing the front tires from on top of his body.

By the time I saw the video, Marques Gaines had been dead for three months. It was 4:00 a.m., and I was in bed in my Los Angeles apartment. After seventeen years as a journalist writing about unsolved murders, stories with no endings tend to elbow their way into your dreamscape. They aren’t nightmares, just strange situations. The images and settings and characters are always slightly off, always a little different from real life. Every now and then, they trade starring roles with my dad, who has somehow clawed his way out of his grave to come visit me. That one is a nightmare, because I always know in my dream that he has to go back. Either way, they don’t lend themselves well to restful sleep.

I clicked on the play button again, and my anger started to percolate. A few dark weeks ago, I was sitting in a bar in Boston, the dirt still on my shoes from a day of investigating the scene where a woman and three children were murdered, stuffed into two fifty-five-gallon drums, and dumped in the New Hampshire woods. I was two beers into the night when I absentmindedly looked at my Facebook messages and saw a note from a stranger. Not sure if you heard. So very sorry, the woman wrote, with a link to an article. I read the headline six or seven times, trying to wish the words away: Michelle McNamara, Writer and Wife of Patton Oswalt, Dead at 46.

Michelle was a partner in crimesolving. She died in the middle of her pursuit of a real-life monster in the closet, the Golden State Killer, leaving behind an unfinished manuscript about her obsession with the case. He had murdered at least twelve people and raped at least fifty women in their own homes. Michelle was driven, determined. Relentless. We would meet every month for lunch, and she would tell me about her quest. About how close she thought she was to finding him. To finding the monster.

What I had just witnessed was a monster in the street. But both were cut from the same cloth. They were masters of terror shouting in their actions “I am king here.” The Golden State Killer would rape a woman in her own home while her husband was forced to lie still, lest the dishes the criminal had laid on his back make any noise and provoke him further. He would make himself a sandwich, riffle through cabinets, and then go silent, making the victims think he might have left before announcing he was still there and the terror was not over. For those few hours, Michelle’s monster was the king of those people. He had their entire lives inside his palm, and he thrived on it. On the night that Marques Gaines died in Chicago, the Man in the Green Hoodie was the king of that street corner. He stalked the sidewalk, eyeing everyone in his path as prey, just waiting for someone to say something to him. Make eye contact with him. Walk down the street in a manner that just rubbed him the wrong way and be prepared for a world of hurt.

Michelle had only sketches of her villain. Sketches of a man who wore a mask. A phantom. The Man in the Green Hoodie was fully formed, preserved forever on video.

Whenever people ask me why I only write about unsolved murders, I always say the same thing: because I hate the guy who got away with it. But after Michelle died, it was different. Now I hate the perpetrator for taking over the lives of the living just as much as taking the lives of the dead. The victim’s families. The investigators. The volunteers. They all gave up giant chunks of their own lives to search for an answer that someone selfishly kept hidden away.

People die before getting the answer.

As a journalist focusing on cold cases, I opened letters every day from family members desperate for justice. Some wanted to know who killed their son. Some wanted to know where their daughter was buried. Some just wanted to talk. Because everyone else had stopped listening, they came to me. I tried to help each and every one of them. But every story I wrote—the DJ shot dead on New Year’s Eve in his Miami apartment, the hippie girl gone missing in the marijuana fields of Northern California, the Swedish nanny found cut in half in a Boston dumpster—had one thing in common: they had no endings. The killers had gotten away. The missing stayed missing. The Villain with a Thousand Faces continued to grow stronger. And now, as I stared at my computer screen, the Man in the Green Hoodie was the newest face in the club.

I watched the video again and again, my anger building with each play. After the tenth viewing, I made up my mind. This time was going to be different. I was going to give Marques Gaines’s story an ending.

I was going to solve the crime myself.

This post is sponsored by Sourcebooks. Thank you for supporting our partners, who make it possible for The Lineup to continue publishing the stories you love.