The Godfather of Bizarre

Everybody has heard of teleportation, alien abductions and poltergeists, but without the pioneering work of Charles Fort, it’s unlikely any of these phenomena would have entered public consciousness.

The name Charles Fort may be unfamiliar to many, but without him there would, in all likelihood, have been no Leonard Nimoy hosting In Search of…, or The X Files or Barry Manilow songs about the Bermuda Triangle, or even Harry and the Hendersons. He is the spiritual pet-owner of the Loch Ness Monster and the Yeti. The Roswell alien is his Godchild

Born in Albany New York in 1876, Fort was the inquisitive author who brought spontaneous combustion, water-divining, and UFOs into the public domain. The writer has been called many things from the patron saint of cranks to the father of the paranormal. The latter is quite a claim, especially since writers have been focusing on the weird and the monstrous since the days of Ancient Greece.

Related: Tales of the Weird

The key difference is that Homer, Edgar Allan Poe, Arthur Machen, Algernon Blackwood, and the rest wrote of the paranormal as fiction, while Fort wrote of it as fact. The man who invented the word "teleporter" and was the first to suggest aliens might be living among us in human form, was the son of a prosperous Albany grocer. Fort’s mother died when he was a child. His father was a brutal autocrat, beating his three sons regularly and locking them in a darkened cellar for days at a stretch. Charles escaped the parental home for journalism and pulp fiction.

He travelled to England, Scotland, and South Africa and married a nurse, Anna, who loved movies and parrots. They settled in a tenement in the Bronx. Charles struggled to make a living as a freelance reporter, topping up his income by writing jokes and washing dishes.

Fort stumbled onto his calling one day in a New York public library when he was combing through old newspapers looking for ideas for feature stories. He started making notes of what we’d now call “anomalous events” (“damned data,” as Fort called it, because it had been condemned to scientific limbo by the academic establishment). Soon he was painstakingly cataloguing the weird and the unexplained on thin strips of paper, which he filed in the shoeboxes that lined the walls of his New York apartment. By now Fort’s appearance—stocky, mustached, bespectacled, quizzical, and agitated—variously called to mind Theodore Roosevelt and Oliver Hardy. Perhaps that was accurate, as he was both intrepid and comical.

As a writer, Fort had a gift for capturing the language of tenement life. It was this that caught the attention of Theodore Dreiser. As a novelist, Dreiser brought gritty naturalism into modern fiction with works such as Sister Carrie and An American Tragedy. His personal beliefs, however, tended towards the mystical. According to his friend H. L. Mencken, Dreiser had a head filled with "Bohemian mush."

Related: 10 Bizarre but Great Horror Movies You Need to See

So when Fort presented his new admirer with the manuscript of his novel X—a book in which Martians manipulate humanity using telepathic rays—Dreiser embraced it as a work of genius rather than tossing it out of the window with a loud guffaw. Sadly, no publisher agreed with the great novelist’s assessment. Fort’s follow up, imaginatively titled Y and featuring a sinister alien race who live at the South Pole, was also met with outright rejection. Infuriated, the author burned both manuscripts, abandoned the life of the novelist and focused instead on non-fiction.

With the continued support of Dreiser, from 1919 the tales from Fort’s stuffed shoeboxes—gradually filled out to close to 60,000 items, with stories gleaned from long hours spent in the reading rooms at the British Museum in London—were published to a predictable mixture of acclaim and derision.

Related: 22 Paranormal Books You Haven’t Read Yet (But Should) 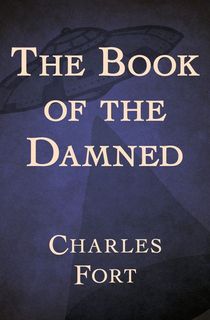 The Book of The Damned (1919), New Lands (1923), Lo! (1931) and Wild Talents (1932) are compendiums of anomalous happenings, parapsychology and cryptozoology. They combine accounts of wide-ranging unexplained events—fish falling from the sky in Canada, bloody rain in California, a downpour of frogs in Connecticut, the mysterious vanishing of a British diplomat, Benjamin Bathurst and the crew of the Mary Celeste, a werewolf in Northumberland, the footprints of a goat-like biped found in the snow in South Devonshire—with Fort theorizing on what it might all mean. Could the rain of fish and frogs come from a vast heavenly lake located between Brooklyn and the moon? Might the falling blood be the result of a ferocious battle between inter-galactic whales? Was there some kind of vast underwater ocean into which all lost people and things were deposited?

Whether the author took all this quite as seriously as some of those who later followed him was never entirely clear. The books are written with off-hand wit and filled with jokey asides. Fort certainly never presented himself as the leader of a movement. Nor would he have wanted to be one. “I believe nothing of my own that I have ever written,” he said. Like Groucho Marx, Fort would not have wanted to belong to any club that would have him.

Fort was a knee-jerk contrarian. He could not stand being told what to do and what to think. He was a man with a mischievous bent and a lifelong hatred of authority (maybe we can blame his disciplinarian father for that). By the 1920s, scientific rationalism had assumed the role of a strict, po-faced patriarch loftily dismissing those who argued with its orthodoxy as lunatics or simpletons. Fort’s response to what he regarded as a smug scientific establishment was essentially anarchic. He is the smart-ass kid at the back of the class bombarding the biology teacher with “But what abouts?”

Whether Fort was a genuine believer in the paranormal incidents he chronicled or was simply using them to undermine the establishment remains an open question. He died in New York, aged just 57, probably from leukemia. His intentions, like many of the events he catalogued, remain enigmatic.

Related: 8 Creepy Paranormal Book Excerpts That Will Chill You to Your Core

In the 1930s, writers began ransacking Fort’s books for plot ideas for stories, novels, and movies. They still do. When fish fall out of the sky in Paul Thomas Anderson’s Magnolia, Donald Sutherland screeches in Invasion of the Body Snatchers, or a drummer spontaneously combusts in This is Spinal Tap—that is the legacy of Charles Fort.