Though we may never know exactly what happened in the starlet’s home the night she died, coroner Thomas T. Noguchi sheds light on the controversial case.

When Marilyn Monroe died on August 5, 1962, by purported suicide, the public was in utter shock. Monroe, born Norma Jeane Baker, was said to have died from an overdose of Nembutal and chloral hydrate pills, according to the coroner’s report. But as conspiracy theories usually go, many people over the years have suspected foul play was involved in her death.

Twenty years after Monroe died, the Los Angeles County District Attorney’s Office, due to tremendous public pressure, was forced to reopen Monroe’s case. District attorneys began to question the original autopsy, citing the improbability of Monroe’s death being caused by a pill overdose if no pills had been found in her digestive tract. Monroe’s ties to the Kennedys have even led some to believe that the powerful family played a pivotal role in her demise.

While we may never know the whole story behind Monroe's death, Thomas T. Noguchi and Joseph DiMona—through their in-depth investigation of the Monroe case in their book Coroner—brings us closer to what may have happened on that fateful night.

Read on for an excerpt of Coroner, and then download the book. 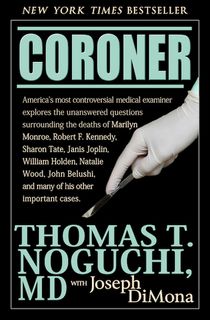 In the 20 years since her death, speculations and theories about how and why Marilyn Monroe died have grown as numerous as the theories surrounding the assassinations of President Kennedy and of Robert Kennedy himself. The most prevalent of them called Monroe’s death murder, done to silence her and prevent her from destroying Robert Kennedy’s political career. I called her death suicide—both twenty years ago and today—but I admit there are many disturbing questions that have remained unanswered.

Norma Jean Baker was born in Los Angeles General Hospital (now the Los Angeles County-University of Southern California Medical Center), to a mother with a history of mental illness and a “biker” father who deserted her mother before Norma Jean was born and who died in a fiery motorcycle accident not three years later. When her mother was committed to a mental institution, the little girl was sent to live with different sets of foster parents, ranging from whisky-drinking low-lifes to religious fanatics. In between she spent years in a Los Angeles orphanage.

The war saved her. In 1942 women were being hired to work in defense plants, and Norma Jean broke out of her foster-parent straitjacket by acquiring a job at an aircraft factory, where she met and soon married James Dougherty, who represented even more long-range security. But in that same year she was also perceived as an emerging beauty, with soft blond hair, wide, dreamy blue-gray eyes, and a voluptuous figure that drew whistles at the aircraft plant. At war’s end she was nineteen, and photographers were asking to snap her picture.

And she still clung to a childhood dream—remembered in a poignant interview a few years later when she was just starting out as a motion picture actress doing bit parts. In an interview with Associated Press columnist James Bacon at the RKO studio, she recalled that she had lived in a foster home near the studio when she was a little girl. She received an allowance of five cents a month from her foster parents, in exchange for which she washed all of the dishes. “They had kids of their own and when Christmas came there was a big tree and all the kids in the house got presents but me. One of the other kids gave me an orange.

Marilyn said she could still remember eating that orange all by herself. “And I could look up and see the RKO studio water tower. I think that’s when I decided that someday I would be an actress, and someday I would get inside that studio.

Want more books on mysterious celebrity deaths? Sign up for The Lineup's newsletter and get shocking stories delivered straight to your inbox.

Driven by that dream, Norma Jean divorced Dougherty in 1946 and became one of the countless young girls who arrive in Hollywood each year, knowing that beyond the locked gates of motion picture studios incredible fame and riches can be won—not only by talent, but by a “look,” a shape, an inflection of the voice. But success did not come overnight for the young woman who now called herself Marilyn Monroe. It was four long years before she finally landed a walk-on part in a gangster film called Asphalt Jungle. Her scenes were brief but electric, and moviegoers were enchanted by her beauty, her sensuality, and yet through it all a vulnerable innocence which she never lost. Her new fans and the studio bosses took notice. She won better and larger roles until, in 1953, scandal almost derailed her rise to stardom. It was revealed that she had posed nude for a calendar while she was a struggling starlet.”

The studio heads awaited the national outcry of outrage and shock. But the criticism, amazingly, never came. There was something about Marilyn Monroe that everyone liked, no matter what. Bravely, she held a press conference to face belligerent reporters. Why had she posed naked? Monroe answered simply, “Because I needed the money.”

One outraged female reporter apparently couldn’t believe that Monroe had really been completely nude. “Didn’t you have anything on at all when you posed?” she asked.

The controversy over the calendar catapulted Monroe to worldwide celebrity, a status she never lost. At the height of her fame, she received thousands of letters a week, dozens proposing marriage. According to The New York Times, Communists denounced her as a capitalist trick to make the American people forget how miserable they were.

But somewhere along the way things started to go wrong. In 1954 she married the most popular male athlete in the country, Joe DiMaggio, the baseball player. The marriage lasted only nine months. In 1956 Marilyn entered into another “dream” marriage, this one to the country’s leading intellectual playwright, Arthur Miller. That dream also ended in divorce, in 1960. In fact, during the period of her greatest career success she had one personal disaster after another, ranging from miscarriages to failed marriages. She was told by doctors that she would never be able to have a child.

And then her acting career began a disastrous dip. Two films, Let’s Make Love and The Misfits, were box-office disappointments. And she started battling with her studio, 20th Century-Fox, over her next film, Something’s Got to Give. She said she didn’t want to do the picture. But now, for the first time, the studio, which used to be awed by its star, refused to bow to her wishes. The bitter message was clear. She was no longer a box-office phenomenon who could make her own rules.

Against that depressing background, the emergence of the two Kennedy brothers in her life must have seemed thrilling and magical. Shoddy Hollywood types may have been downgrading her, but at the same time she was rumored to be romancing the President of the United States. And then his brother the Attorney General began paying close attention to her, too, even visiting her Hollywood home.

Everything else in her life had turned sour. Strapped for cash, she was forced to give up her expensive cottage at the Beverly Hills Hotel and rent a modest home in Brentwood. She was taking so many tranquilizers that her psychiatrist became alarmed and had to put her on a pill-reducing program. And then, for one reason or another, the only bright light in her existence, the Kennedy connection, began blinking off, and her “distraught” calls to Robert Kennedy commenced—until, eventually, she couldn’t reach him on the telephone.

At this point, Marilyn Monroe became so depressed that her psychiatrist, Dr. Ralph Greenson, insisted she hire a psychiatric nurse/housekeeper, Eunice K. Murray, to watch over her. And yet Monroe was fighting back. She had contacted the president of 20th Century—Fox about resuming work on the suspended motion picture. And she was actively considering offers to appear in a Broadway musical and a giant Las Vegas show for which she was guaranteed fifty-five thousand dollars a week.

So Mrs. Murray wasn’t really worried when Marilyn Monroe came down to breakfast on August 4, 1962.

“Orange juice?” Monroe said with a smile. “Looks good.” Dressed in a blue robe, she appeared surprisingly cheerful as she sat down across a table from the housekeeper, poured herself some juice and started chatting. But suddenly she asked Mrs. Murray a question that startled her. “Is there any oxygen in the house?”

Oxygen? Mrs. Murray thought. This wasn’t a hospital. Why would oxygen be kept in a private home? She told Marilyn there was none and asked her why she wanted it. Marilyn said she was just curious.

Later that morning, Mrs. Murray telephoned Dr. Greenson to report the strange question, and Greenson said he would stop over later and talk to Marilyn about it.

At 12:00 noon, Miss Murray heard an argument in the hall. Pat Newcomb, Monroe’s friend and press agent, had slept over the night before. And from what Murray could hear, Monroe was angry because Newcomb had removed her sleeping pills that night and Monroe hadn’t been able to sleep. Now Mrs. Murray knew why Monroe, who usually slept until noon, had dropped into the kitchen for breakfast so early that morning. She heard the door slam as Newcomb left.

Dr. Greenson arrived in the afternoon and spent two hours with his celebrated patient. He later reported that she was “confused and disoriented,” but even up until the time of his own death several years later he never divulged Marilyn’s reason for asking about oxygen.

Related: Peg Entwistle: The Ghost of the Hollywood Sign

Monroe, as usual, remained in her robe all day, spending most of that time in bed, talking on the telephone. Nevertheless, Mrs. Murray perceived no hint of a suicidal depression. In fact, at 7:30 P.M. Monroe was laughing and chatting on the telephone with Joe DiMaggio’s son, Joe Junior.

Yet—and this was one of the strangest facts of the case—not 30 minutes after that happy conversation, Marilyn Monroe was dying.

We know this from the report of a telephone call made to Monroe at about 8:00 that night. And the identity of the person who originated the call was another strange fact that has provided grist for the murder theorists. For it was Robert Kennedy’s brother-in-law, Peter Lawford.

Want more true crime books? Sign up for The Lineup's newsletter and get our book recommendations delivered straight to your inbox.