The Terror: The Doomed Expedition to the Northwest Passage

Dan Simmons’s thriller is a chilling re-imagination of what happened to Sir Franklin's long lost crew.

SPECIAL NOTE: The Terror by Dan Simmons is included in our latest Creepy Crate! Order by July 9 to get your copy, along with a selection of surprise horror and true crime-themed items. Use promo code TERRORBOOK for $5 off your crate.

In 1845, HMS Erebus and HMS Terror departed England and headed towards the Arctic. Led by Captain Sir John Franklin, the expedition set out on a mission to find the Northwest Passage. Before arriving at their destination, the two ships became stuck in the ice in the Victoria Strait. At some point, all 129 men on the two ships disappeared.

The graves of three crew members who died earlier in the voyage were found three years later, but the remains of the rest of the crewmen were never located. Many theories have been proposed. In the 1980s, a team of scientists suggested that the crew had died of mass pneumonia, tuberculosis, or lead poisoning. Another theory proposed the crew was malnourished and died slowly of starvation. Another popular proposition? The men turned to cannibalism and killed one another. To this day, the fate of the members of the Erebus and the Terror remain a mystery.

Want more scary thrillers? Sign up for The Lineup's newsletter and get our recommended reads delivered straight to your inbox.

In Dan Simmons’s thriller, The Terror, he introduces a very different explanation: A Monster destroyed them all. Simmons’s novel, a fictional retelling of the expedition, features many members of Sir John Franklin’s actual crew. As the tale begins, the ships have been icebound for over a year. The crew members are suffering from harsh conditions and are living in fear of a mysterious killer creature. The less imaginative believe the creature is just a polar bear. The more fearful know that there is some otherworldly creature coming after them.

The chilling tale delves into the failures of the expedition that lead to the horrific conditions that the crew finds themselves in – and the evolution of the vicious beast. Simmons spins a tale that seamlessly intertwines the true history of Franklin’s journey with a terrifying supernatural creature.

Earlier this year, The Terror was adapted for TV by AMC, and the horror-filled show was a huge hit with fans of the book and new viewers. The show has been renewed for a second season, set to premiere in 2019.

The Terror by Dan Simmons is included in our latest Creepy Crate! Order by July 9 to get your copy of The Terror, along with a selection of surprise horror and true crime-themed items. Use promo code TERRORBOOK for $5 off your crate.

Read on for an excerpt of The Terror, and then download the book. 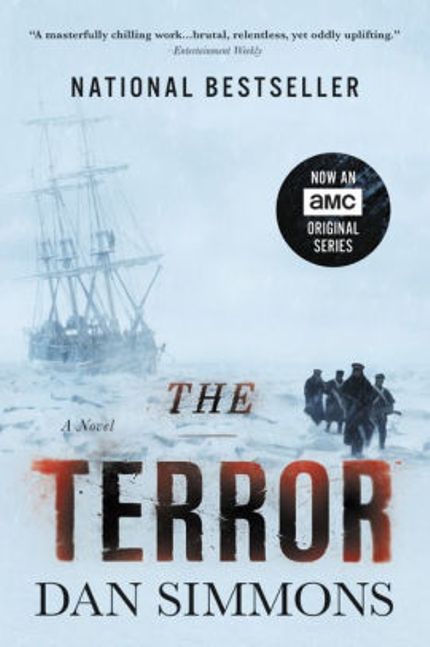 The creature came hurtling over the starboard railing toward him, the mass of it backlit by lantern-glow, clearing the low barrier with all four huge legs in the air.

In an instant Blanky was on his feet and running out into the sea ice and serac darkness.

Only after he’d gotten fifty yards or so from the ship, slipping and falling and rising and running again, did he realize that he may well have just signed his own death warrant. He should have stayed close to the ship.

He should have run around the snow-heaped boats along the forward starboard length of the hull, clambered over the bowsprit now pressed down deep into the ice, and made for the port side, shouting to the men above for help as he did so.

No, he realized, he would have been dead before he got through the tangle of bow rigging. The thing would have caught him in ten seconds.

Why did I run in this direction?

He’d had a plan before the deliberate fall from the rigging. What the hell had it been?

Blanky could hear scraping and thudding on the sea ice behind him.

Someone, perhaps the assistant surgeon from Erebus, Goodsir, had once told him and some other seamen how fast a white bear could charge across sea ice toward its prey — twenty-five miles per hour? Yes, at least that. Blanky had never been a fast runner. And now he had to dodge seracs and ice ridges and cracks in the ice that he couldn’t see until he was a few feet from them.

That’s why I ran this way. That was the plan.

The creature was loping along behind him, dodging the same jagged seracs and pressure-ridge slabs that Blanky was clumsily slaloming around in the dark. But the Ice Master was panting and wheezing like a torn bellows, while the huge shape behind him was grunting only slightly — with amusement? anticipation? — as its forepaws thudded down onto the ice with each stride that was the equal to four or five of Blanky’s.

Blanky was in the ice field about two hundred yards from the ship now. Bouncing off an ice boulder he hadn’t seen until it was too late to dodge, taking the impact on his right shoulder and feeling that shoulder instantly go numb to join other numb parts of him, the Ice Master realized that he’d been blind as a bat the entire time he’d been running for his life. The lanterns on Terror’s deck were far, far behind him now — an impossible distance away — and he didn’t have time or reason to turn and look for them. They could give no illumination this far away from the ship, and they could only distract him from what he was doing.

What he was doing, Blanky realized, was running and dodging and swerving through his mental map of the ice fields and crevasses and small bergs that surrounded HMS Terror to the horizon. Blanky had had more than a year to stare out at this frozen sea with all its disturbances and ridges and bergs and upthrustings, and for a few months of that time he’d had the thin arctic daylight to see by. Even in winter, there were hours on watch in moonlight and starlight and in the glow of the dancing aurora when he’d studied this circle of ice around the trapped ship with an Ice Master’s professional eye.

About two hundred yards out here in the ice jumble, beyond a last pressure ridge he’d just stumbled and clambered over — he could hear the thing leaping it less than ten yards behind him — he remembered a maze of former bergy bits, small icebergs calved from their larger brethren, upended into a tiny mountain range of cottage-sized ice boulders.

As if realizing where its doomed prey was headed, the unseen shape behind him grunted and picked up speed.

Too late. Dodging the last of the tall seracs, Blanky was into the bergy labyrinth. Here his mental map failed him — he’d only seen the miniature berg field from afar or through a telescope — and he bounced off one ice wall in the dark, fell on his arse, and was scrambling forward on all fours in the snow with the creature closing to within a few yards before Blanky regained his breath and wits.

The crevice between two carriage-sized bergs was less than three feet wide. Blanky scurried into this — still on all fours, his bare hands as unfeeling and remote as the black ice under them — just as the thing reached the crack and swept a giant forepaw in after him.

The Ice Master rejected all images of mice and cats as impossibly huge claws tossed up ice chips not ten inches from his boot soles. He stood in the narrow gap, fell, got to his feet again, and stumbled forward in near absolute blackness.

This was no good. The ice alley was too short — less than eight feet — and it had dumped Blanky into an open gap beyond it. He could already hear the thing loping and grunting its way around the block of ice to his right. He might as well be on a clear cricket pitch as try to stay here — and even the crevice, its walls more snow than ice, would be only a temporary hiding place. It was a place to wait for only a minute or so in the darkness until the thing enlarged the opening and clawed its way in. It was only a place in which to die.

The wind-sculpted little bergs he remembered from looking through his glass were... which way? To his left, he thought.

He staggered left, bounced off ice pinnacles and seracs that would do him no good, stumbled over a crevasse that dropped only two feet or so, scrambled up a low ridge of serrated ice, slid back, scrambled up again, and heard the thing hurtle around the ice block and slide to a stop not ten feet behind him.

The larger bergs began just beyond this ice boulder. The one with the hole he’d observed through the glass would be…

... these things move every day, every night of every day…

... they collapse, regrow, and reshape themselves as pressure shoves them willy-nilly…

... the thing is clawing its way up the ice slope behind him onto this flat but dead-end plateau of ice where Blanky now teeters…

Shadows. Crevices. Cracks. Dead-end alleys of ice. None large enough for him to slide into. Wait.

There was a single hole about four feet high on the face of a little upended berg on his right. The clouds parted ever so slightly and five seconds of starlight gave Blanky just enough illumination to see the irregular circle in the wall of dark ice.

He lunged forward and threw himself into it, not knowing if the ice tunnel was ten yards or ten inches deep. He didn’t fit.

The outer layers of his clothing — cold-weather slops and greatcoat — made him too bulky.

Blanky ripped at his clothing. The thing had clawed its way up the final slope and was behind him, rearing onto its hind legs. The Ice Master could not see it — he did not take time even to turn to look — but he could feel it rearing.

Without turning, the Ice Master flung his greatcoat and other layers of outer wool backward at the thing, hurling the heavy garments as quickly as he could.

There was a woof of surprise — a gust of sulfurous stench — and then the tearing noise of Blanky’s clothing being ripped apart and tossed far out into the ice maze. But the distraction had bought him five seconds or more.

Again he threw himself forward into the ice hole.

His shoulders only just fit. The toes of his boots flailed, slid, finally found grip. His knees and fingers clawed for purchase.

Blanky was only four feet into the hole when the thing reached in after him. First it tore off his right boot and part of his foot. The Ice Master felt the shocking impact of claws into his flesh and thought — hoped — that it was only his heel that had been torn away. He had no way of knowing. Gasping, fighting a sudden stab of pain that even cut through the numbness of his injured leg, he clawed and wriggled and forced himself deeper into the hole.

Claws raked ice and tore down his left leg, ripping flesh exactly where Blanky had already injured himself in the fall from the rigging. He smelled his own blood and the thing must also have smelled it because it quit clawing for a second. Then it roared.

Featured still from 'The Terror' via AMC