Everything We Know So Far About the Upcoming Remake of The Stand: The Miniseries

Here's what to expect from the highly anticipated 2020 adaptation of Stephen King's apocalyptic plague epic.

Good news, horror fans: Stephen King’s apocalyptic epic is coming back to the small screen in 2020! Previously adapted into a 1994 miniseries starring Gary Sinise and Molly Ringwald, The Stand takes place after a deadly plague wipes out most of the world’s population—and ushers in a good-vs-evil conflict of Biblical proportions. And this year, director and self-professed King fanboy Josh Boone (The Fault in Our Stars) will put his spin on the #1 bestseller with a 10-episode series.

Originally conceived as a feature film, the show will air on CBS All Access. But perhaps most exciting of all is the brand-new ending Stephen King is writing for its series finale. It will mark King’s third return to the frightening world of The Stand—in addition to the original novel, he also wrote the screenplay of the 1994 adaptation—and we can’t wait to see what he has in store for us.

CBS All Access EVP Julie McNamara teased fans about the new ending, promising that “[King’s] episode will contain a story that takes us beyond the book” to answer any lingering questions about the survivors' fates.

Who is in The Stand this time around?

It’s hard to identify the “main character” of The Stand. This sprawling, multi-part narrative follows a massive ensemble cast—some protagonists, some antagonists, and others somewhere in-between—as their stories intersect and diverge in the wake of the world-ending outbreak of “Captain Tripps.”

That said, Stu Redman—who rises to prominence as a leader among the Free Zone survivors—was the focus of much of the previous miniseries (played by Gary Sinise). This time around, Redman will be played by James Marsden (Westworld). It has also been announced that Odessa Young (Assassination Nation) will play Redman’s love interest, Frannie Goldsmith, who was formerly portrayed by Molly Ringwald.

However, the leaders of the book’s two factions are also pivotal characters in any adaptation of The Stand. Mother Abagail, the spiritual leader of the “good guy” Free Zoners, will be played by the inimitable Whoopi Goldberg. She’ll go toe-to-toe with Alexander Skarsgård’s (True Blood, Big Little Lies) Randall Flagg, the supernaturally evil head of a post-plague empire in Las Vegas. The Skarsgård brothers are no strangers to King properties—you’ll recognize Alexander’s younger brother Bill as Pennywise in the recent two-part adaptation of It.

Meanwhile, Daniel Sunjata (The Dark Night Rises) will play Cobb—a lead character who is tasked with watching over Stu Redman—and Heather Graham (Boogie Nights) is the wealthy Rita Blakemoor. Other cast members include Jovan Adepo as Larry Underwood, Amber Heard as Nadine Cross, Henry Zaga as Nick Andros, Brad William Henke as Tom Cullen, and Owen Teague (who we saw in It) as Harold Lauder. Greg Kinnear and Marilyn Manson will also be making appearances.

What happens in The Stand? (Spoilers ahead!)

What doesn’t happen in The Stand might be the better question. Stephen King is known for writing lengthy novels, all of which feature complex webs of characters and subplots, and The Stand is his longest book to date. What’s more, there are multiple updated and expanded editions. The Stand: The Complete & Uncut Edition is the longest version as of this writing, and it features a 1990s setting (versus the 1980s setting of the original) and never-before-published plot lines. Such scenes were originally cut in an effort to make the book more “more marketable.”

Regardless of which version you read (or watch), The Stand is an apocalyptic tale of epic proportions. It opens when a bio-engineered strain of influenza escapes containment at a military base and quickly spreads across the globe, sometimes by accident and sometimes by design. The deadly epidemic, called “Captain Tripps,” ultimately decimates more than 99% of the world’s population.

Only a handful of survivors are immune to the illness, and they find themselves sorted into two main camps. Our protagonists dream of—then join—a 108-year-old woman named Mother Abagail. Allegedly gifted with visions from God, Abagail possesses precognition and acts as the spiritual leader of the band of “good” survivors, helping them to establish the Free Zone in Boulder, Colorado.

At the same time, Randall Flagg—also known as the Dark Man and a recurring character in King’s oeuvre—appears in the dreams of the “evil” survivors. He draws them to Las Vegas, where he launches a weapons program with the intention of building an empire of destruction. An ageless demonic force with little memory of his life before Captain Tripps, Flagg is described as looking “like anybody you see on the street. But when he grins, birds fall dead off telephone lines . . . The grass yellows up and dies where he spits. He’s always outside. He came out of time.”

Inevitably, Flagg's group fights against the Free Zoners—the Stand of the title—and the conflict ends when the Hand of God seemingly activates an atomic bomb in Las Vegas.

So what will happen in the new miniseries?

We have reason to believe the new miniseries may deviate somewhat from King’s novel, but there is little indication as to what direction those deviations may take. Will King’s new ending jump off from the finale of the shorter version? Or is it an expansion of the epilogue added to the Complete & Uncut Edition? We’ll have to wait until the series kicks off to find out. Though an official premiere date has yet to be announced, post-production wrapped in early March of 2020.

In the meantime, we can rest assured that something special is coming our way.

“The scripts are dynamite,” King promised. “I believe [the new miniseries] will take viewers away to a world they hope will never happen.”

Read The Stand before the miniseries comes out! 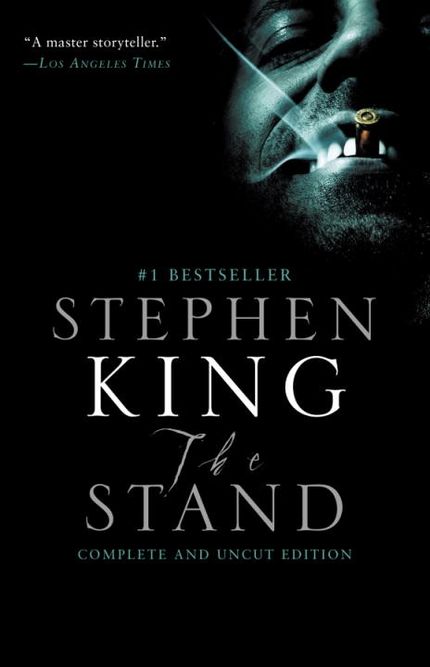