The One, Tiny Mistake That Finally Took Down The Night Stalker

Serial killer Richard Ramirez was meticulous when it came to covering his tracks ... until his final attack in 1985.

By the time infamous “Night Stalker” Richard Ramirez was caught, he had murdered 13 people.

For more than a year in the mid-1980s, Ramirez went on a killing spree down the coast of California—burglarizing, sexually assaulting, and killing people in their homes. The public was terrified. Los Angeles detectives Frank Salerno and Gil Carrillo worked tirelessly on the case, searching for any slip up that would lead them to the killer. And on August 24, 1985, the “Night Stalker” gave them that opportunity.

As Richard Ramirez approached his next victims’ home in Orange County, 13-year-old James Romero III noticed the suspicious-looking man driving around his neighborhood. When Ramirez had finished torturing his victims, Romero wrote down a partial license plate that would later help identify the killer. And although Ramirez was usually meticulous when it came to covering his tracks, he left a single fingerprint on the rearview mirror of the car he abandoned in Los Angeles following this final attack.

Journalist Philip Carlo’s classic true crime biography The Night Stalker was the first to detail the life and crimes of Richard Ramirez, including the mistake that led to his capture. Twenty years later, placing ourselves back in Ramirez’s sick and twisted mind still puts our stomach in knots … and yet, we can’t stop reading.

Read on for an excerpt from The Night Stalker, and then download the book. 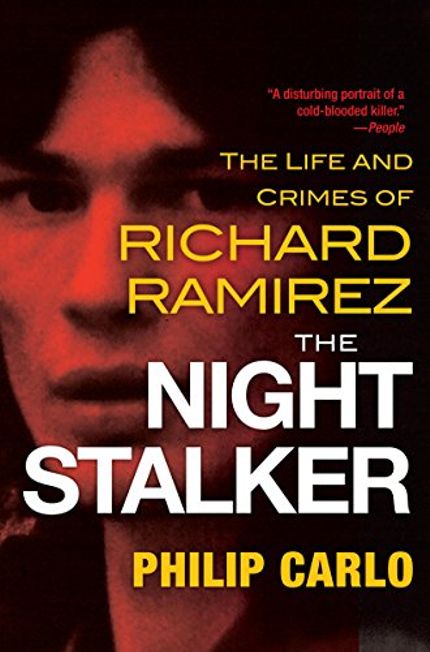 Fate now stepped in and dealt a crippling blow to the Stalker’s incredible run of luck: a thirteen-year-old boy was fixing his motor scooter on a warm summer night when he looked up and saw the orange Toyota with its lights off slowly drive by. James Romero III had straight blond hair and looked like Dennis the Menace. There was something about the driver, the way he looked around—a malevolence—that alerted James to danger. He watched the car carefully but did not write down its license plate number, though he thought about it.

When the killer reached Chrisanta Drive, he parked and walked back along it. He had not seen the boy.

The Stalker moved up the street at a pace calculated not to draw attention to himself, keeping, as always, in the shadows. He had nothing with him tonight but a gun—the .25 automatic. Anything that could tie him to the Stalker assaults he’d left behind. Even if he went down fighting and was killed, he didn’t want to be linked publicly to the crimes. Somewhere there were people who loved and cared for him deeply, and he didn’t want them to know. His family was the only thing that made him sorry for what he’d become; but as long as they never found out, it wouldn’t matter, and so tonight he had only the one gun; no handcuffs, no thumbcuffs, no knives, no police scanner. They were all hidden away—safe from Carrillo and Salerno. However, he had on the same shoes he’d worn during the Abowath and Petersen attacks.

Tonight, he chose the home of 29-year-old Bill Carns, who lived with his 27-year-old fiancee, Carole Smith. Bill was tall, thin, and muscular, and he wore a mustache. His fiancee had blond hair and was attractive, with blue eyes and an athletic figure.

Earlier that evening they had talked about the Stalker on the way home from the movies—and they’d discussed getting bars, and maybe even a gun.

Bill was a computer whiz who worked for the Burroughs Corporation. He had been transferred from their Dakota branch in 1983 and had settled in Mission Viejo, only a mile away from his job. He was very much in love with Carole.

Their house was beige with a wood-shingle slanted roof and two large bay windows. There were pine and maple trees growing in the front yard, which again created the shadows the Stalker embraced like a lover. There was a 13-foot black tar driveway to the garage on the right and a little lawn on the left, the front door was in the center of the house. He first tried the front door and windows; they were locked. He walked to the back of the house and managed to get into a rear window after removing the screen. As always, he got used to the house, the dark, then moved forward with a small penlight.

As he reached the master bedroom, he saw the sleeping figures of Bill Carns and his fiancee and he cocked the automatic. That sound entered Bill’s sleep, perhaps because they had been talking about the Stalker earlier—

He opened his eyes, felt Carole next to him, saw the light of the flashlight, and as fast as he could move, started out of bed, knowing somewhere in his mind what that light meant. The Stalker pulled the trigger and shot Bill in the head, knocking him back down as if he’d been struck by a bat. He moved closer and shot Bill twice more, both times in the head. He saw movement under the blanket, pulled it back, and revealed Bill’s terrified fiancee.

“You know who I am?” the Stalker asked, laughing.

He punched her in the face. “Louder!” he demanded.

His answer was to pull her from the bed, throw her on the floor, and hog-tie her with ties he found in Bill’s closet, while demanding jewelry and money—threatening her, slapping, and kicking her—as blood poured from the bullet wounds in Bill Carns’s head.

She was scared, and that gave him the feeling of power over life that his psychosis so craved.

He ransacked the bedroom with quick, knowing moves. By now it seemed he knew instinctively where to look, and he pulled out drawers, dumped their contents on the floor, stuck his gloved hands anywhere there might be valuables. He found some jewelry and watches, which he took. He made her swear on Satan that he’d gotten all there was. She complied. He dragged her to another bedroom to rape and sodomize her.

When he was finished, he kissed her somewhat tenderly, shocking her further. He tied her up again and demanded cash. She told him there was some hidden in the bedroom. He went to find it. She heard him demand more jewelry from Bill, who was unconscious and bleeding, then laugh in a high-pitched cackle. He couldn’t find the cash and angrily returned to the terrified woman.

He untied her and she showed him where $400 in cash was hidden, which he promptly pocketed.

“You know, this is all that saved you. This is all your life is worth. I would have killed you if it weren’t for this money.” He dragged her to the bathroom and hog-tied her hands and feet.

“Tell them the Night Stalker was here.”

“Say you love Satan!” he demanded.

“I love Satan,” she said. He laughed and was gone. In the sudden silence she prayed.

He exited the house by the front door, calmly walked back to the stolen car, started the engine, and pulled away.

Romero looked up and saw the car again and “the weird-looking guy in black.” This time he made sure he got the plate number. After he memorized only three of its digits, he went into the house he shared with his parents and wrote them down.

The Stalker got back on the freeway and sped toward downtown Los Angeles. Normally, while he drove, he kept his gloves on, but when he was halfway to L.A., he took them off. It was very hot, and his hands were sweating. He’d wipe the car down well before he left it. He got to the Wilshire area in mid-Los Angeles and parked the car in a small shopping center lot at Sixth Street and Alexandria Avenue.

Using the cloth gloves, he carefully cleaned the prints, making sure to get the steering wheel, the shift, and the rearview mirror, which he’d adjusted earlier.

But he missed one fingerprint on the outside of the rearview mirror. He did not notice the two Bibles on the back seat.

He took a bus back to Chinatown, rented a room, and went to sleep, totally unaware of James Romero III or the fingerprint.