SPECIAL NOTE: The Bus on Thursday will be one of two books included in next month's Creepy Crate.

A cancer diagnosis would be terrifying enough—but for Eleanor Mellett, it's just the beginning of her nightmare. After her mastectomy, Eleanor decides to begin a "recovery blog." On it, she documents the healing process and her experiences at a brand-new job in the remote Australian town of Talbingo. Eleanor was recently hired on by the rural school to replace Miss Barker. Strangely, the beloved teacher went "AWOL" with no word to any of the town's other 241 residents.

As Eleanor adjusts to her new life, the locals begin to reveal the underpinnings that make Talbingo so... unusual. Regardless of the eerie atmosphere, Eleanor begins a relationship with Gregory, whose (much) younger brother she teaches, all while navigating encounters with a priest that wants to exorcise the demons that supposedly plague her soul and avoiding a renegade bus dead set on running her down.

When she starts to worry about her relationship with Gregory and what it means for her teaching gig, Eleanor sneaks into his car. She then finds herself along for a ride she'll never forget...

Read on for an excerpt from The Bus on Thursday, one of two books included in the October/November Creepy Crate.

The Bus on Thursday 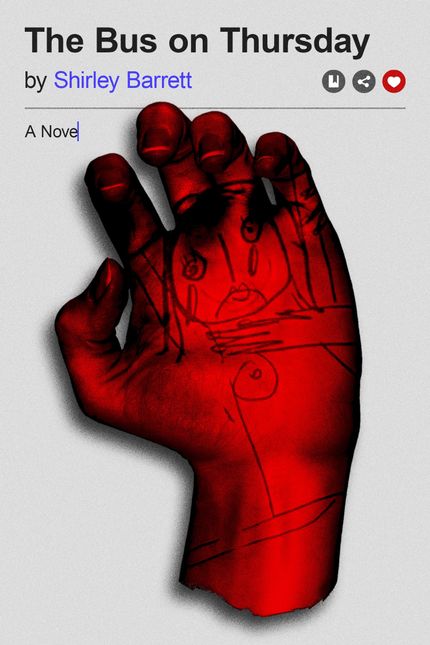 “WHAT THE FUCK ARE YOU DOING?” he screams at me.

The sky is just beginning to lighten now—it’s this very murky gray light, and the atmosphere is so thick with mist that I can’t actually see any kangaroos, although I can hear them, thumping away in fright. I can’t even see the Pondage because the mist is completely covering it. I can just barely make out the shape of the sign forbidding recreational boating. It’s truly so misty it’s like we’re sitting in a cloud, and I make an observation along these lines to Gregory, but he is having none of it.

“WHAT THE FUCK ARE YOU DOING IN MY CAR?” he screams, literally at the top of his lungs. “ARE YOU FUCKING NUTS?”

If I had a dollar for every time someone’s asked me that last question, especially Josh. Still, it hurts to hear it coming from Gregory, so I decide the best thing to do is to act completely calm and composed, completely not nuts. So in a very quiet, reasonable voice I try to tell him that the reason I am lurking in his car in the wee small hours is because I simply wanted to ask him a couple of questions, specifically regarding what Ryan knows or doesn’t know about my missing nipple. But before I even finish explaining, he completely turns on me.

He says, “You know what? I really don’t have time for this shit. And you know what else? You have no moral compass, which I find repugnant. All the more so because of your responsibilities as a primary school teacher. Here you are, charged with instilling in our children the moral values that will carry them through a lifetime, and yet you have no compunctions about engaging in casual sex with a virtual stranger. While intoxicated. Your behavior appalls me. And clearly the problem is systemic because the other one was just as bad.”

Related Link: A Walk in the Woods Has Never Been So Treacherous

I am rendered speechless.

I feel exactly like I’ve been punched in the guts; it literally hurts to take a breath.

So then I do this very strange thing. I open the door of the Charger, and I get out. I take a few steps forward into the mist till I can feel the water beginning to slush around my ankles, and then I start to wade into the Pondage.

Okay, so I admit I have always been one for dramatic attention-seeking behavior in a crisis. Ever since I was a kid. If I got in trouble or anything, I would hold my breath—and I am extremely good at holding my breath, I can actually do it till I pass out. It used to scare my parents half to death. Also, it used to drive Josh mad. And once when we went on a cruise to New Caledonia, and we’d had a few too many mojitos in the Starfish Lounge and inevitably started fighting, I climbed over the railing of this fucking great ocean liner and threatened to jump, which was a very dangerous, insane thing to do, because I was standing on a very slippery perch about one inch wide, and with the slightest roll of the ship, I would have fallen hundreds of feet to certain death in the Pacific Ocean. Josh was furious, as were the Sea Princess security people, who threatened to put me off in Noumea and make me fly home, but I cried so much they finally agreed to let me stay. So what I’m saying is, I guess I was engaging in this kind of typical Eleanor dramatic gesture by walking into the Pondage. I think my plan, if you could call it a plan, was to walk right in and then hold my breath underwater for a very long time, basically just to scare him so he’d feel really bad about what he’d just said to me.

Looking for horror? Sign up for The Lineup's newsletter, and get our terrifying recommendations delivered straight to your inbox.

So I’m wading in through the mist, and I’m suddenly remembering that the sirens went off last night, which means they released water from the Reservoir, which must be why it’s so unbelievably frigging cold—it’s so cold, the muscles in my calves seize up almost instantly with cramp. It’s agony. I reach down to try to massage my cramping legs, and as I do, my hand brushes against something slimy lurking in the water, which for some reason, maybe the texture of it, makes me involuntarily recoil. And I look down, thinking, What is that? And right there in the misty dawn light, I see it.

A human hand, just below the surface of the water. A human hand attached to an arm. Which is attached to a body. All quite decomposed, but definitely recognizable as human. And the hand is open, palm up, what’s left of the fingers slightly curled, and the motion of the disturbed water makes it look like—I know this sounds crazy—but almost like this hand is beckoning me in. And because I have bumped it free of whatever it’s been entangled in, the other hand rises up to the surface now too, and this hand is clutching a clump of long stalks. By which I mean a loose clump of stalks, like it’s pulled them out of the ground, because they still have their roots attached. And then, horribly, the head rises up.

And I know, I just know instantaneously, that this is Miss Barker.

Well, I scream—I mean, the sound that comes out of my mouth is barely even human— and I scramble the fuck out of there just as fast as I can. And I’m like, “Oh my God, it’s Miss Barker!” And now Gregory gets out of the car too. “Miss Barker?” he says. “That’s bullshit.” So very casual, very nonchalant, he wades in to have a look. And seeing her, he changes his tune completely. He cries out: “Oh God. Oh God. Oh God. Oh God.” And then he throws up really violently, like practically projectile.

I mean, I am shocked, of course, at the sight of the body, but Gregory is completely beside himself. He keeps lurching around, groaning and throwing up and clutching his belly. I mean, even though it is admittedly a very shocking and unsettling thing to see, his reaction seems a touch excessive. And meanwhile, I’m thinking, What do I do, what do I do, I better do the right thing for once in my life, I better go get the police. So while Gregory is staggering around and vomiting and carrying on, I start running off in the direction of the police station. And he goes, “No! Wait! Come back!”

So now it starts to get really weird.

He wades back into the water and, right before my very eyes, he grabs the hand that’s clutching the clump of stalks and he is trying to pull the stalks out of the hand. I’m like, What are you doing??? But this dead hand has a ferocious grip and it’s not letting go of these stalks, not for anything. And I’m screaming at him, “You can’t do that! That’s evidence! You can’t touch the body!” And he’s struggling like crazy, grunting with the effort of trying to open up this hand and release the stalks, and suddenly there’s this sickening almighty cracking sound, and the hand actually breaks off the arm and he screams like a girl, I kid you not, and flings the hand into the water.

“Oh God!” he cries, and he stands there gasping for a moment. Then, next thing, he suddenly dives under the water, and he remains below for a tremendously long time. I mean, I thought I could hold my breath, but this guy is like a free diver. Five solid minutes pass by and I’m starting to wonder if he’s ever going to come up. And finally he does come up and he’s all panicky. “I can’t find it, I can’t find her stupid hand!”

And he dives under again, and this time he stays under for what feels like ten minutes. He stays under so long, I’m actually convinced he’s drowned. I’m just standing there, whimpering and fretting and wondering what I should do, and finally I wade back in, which I really don’t want to do because of Miss Barker, and I’m calling, “Gregory! Gregory!” And suddenly I hear a rippling noise, and Gregory emerges from the water right next to me. He’s dripping mud and slime and pondweed, and he’s furious. The word apoplectic comes to mind. He’s all red-faced and crazy-looking and the veins in his neck are bulging out, presumably from holding his breath all that time. I’m like, “Did you find it?”—very meekly, because he’s scaring me—and he’s like, “No, I didn’t fucking find it.” Then he strides out of the Pondage, gets back into the Charger, starts it up, and just reverses the fuck out of there. It’s actually almost comical because at first he doesn’t realize that the passenger door is still open, and it’s snagging and scraping amid the long grass, so now he has to stop the car and try to pull it shut but he can’t

reach it from inside, so he has to get out of the car and walk around to the passenger side and slam the door, which he does very forcefully to make a point, because of course he blames me for leaving it open in the first place. Then he gets back in the Charger and drives off at speed toward the highway, with a big gurgly blast of “Dixie” as a final fuck-you. Leaving me standing in the Pondage with what remains of Miss Barker.

So that was my Thursday morning.

Well, no, actually; that was just the beginning of my Thursday morning.

Want to keep reading? Subscribe to Creepy Crate for your shot at getting The Bus on Thursday.

This post is sponsored by MCD x FSG. Thank you for supporting our partners, who make it possible for The Lineup to celebrate the horror stories you love.