In the 1960s, Albert DeSalvo terrorized the city of Boston during a two-year killing spree.

By the time 1963 rolled around, Boston was in the clutches of a phantom serial killer who had already claimed the lives of 11 women. Known as the “Boston Strangler,” he was difficult to profile, as his victims ranged from ages 19-85 and were very diverse in terms of ethnicity.

His actual name was Albert DeSalvo, and he was a charming, good-looking man, who strangers naturally trusted.

DeSalvo’s 12th victim was named Joann Graff, and she was new to Boston. Having recently graduated from the Chicago Art Institute, she taught Sunday School at her local church and made certain her new home was safe and respectable. And although she mostly kept to herself, there was no stopping what happened next.

On November 22, President John F. Kennedy was assassinated, and Joann’s neighbors — along with the rest of the city — were in a daze. When handsome DeSalvo asked around about a young woman living in the building, her upstairs neighbor didn’t think twice about sending the man down to Joann’s home.

The next day, she was murdered.

The epic search for Albert DeSalvo and his horrific rampage are detailed in Gerold Frank’s bestselling, Edgar Award-winning true crime chronicle, The Boston Strangler. The gripping book pulls you in with details that are as captivating and heartbreaking as they are grisly. 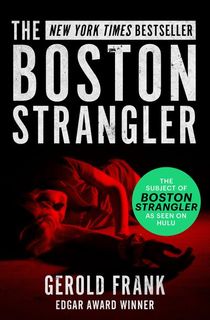 From 1:30 that afternoon—the hour of his death—a distrait Boston, its shops closed, its streets all but empty, sustaining a sense of loss more personal than any other city, for this had been his home, began the long mourning vigil. At 12:17 the next afternoon—Saturday, November 23—the people of Boston saw President Lyndon B. Johnson en route to St. John’s Cathedral for memorial services, and then watched as the TV cameras moved to the White House to show dignitaries slowly entering the East Room where the casket of John Kennedy lay, banked with flowers.

And in the hours that immediately followed, between 12:30 P.M. and 3:30 P.M. that Saturday afternoon, as Boston and the rest of America sat numbly before its television screens, a quiet, retiring 23-year-old girl named Joann Graff was raped and strangled to death in her locked apartment in suburban Lawrence, an hour’s drive from Boston.

She was strangled with two nylon stockings intertwined with a leg of her black leotard, tied about her neck in an elaborate, flowing bow, like a circus clown’s bow-tie, and with the extra half hitch—the Strangler’s knot. She lay diagonally across her bed, nude save for a pink blouse bunched up about her shoulders, her legs wide apart, the left extended directly forward, the other bent almost at right angles, dangling over the edge of the bed, a white slipper still on the foot. The front of her blouse had been ripped open with such violence that four buttons had popped off. There were unmistakable teeth marks on her left breast. Under her head was found the earpiece of her metal-rimmed glasses, surprisingly old-fashioned for a girl of 23. A Salem detective left the scene muttering, “It’s like rerunning a film of Evelyn Corbin.

Joann’s one-room apartment had been ransacked, but left untouched on the table was an envelope with her gas bill and several dollars. There was no sign of forced entry. A girl with few friends, she had come from Chicago five months ago after graduation from the Chicago Art Institute, and she taught sixth grade Sunday School at the Lutheran Redeemer Church in Lawrence. She was so conservative that she thought most print dresses too gaudy to wear. The firm for which she worked as a designer, creating motifs for automobile upholstery, tablecloths, and trays, was directly across the street from Lawrence General Hospital.

[The time of death was carefully established. At 11:30 Saturday morning, Mrs. John S. Johnson of Andover, who had befriended Joann when she first arrived, telephoned to invite her to dinner that night. She had accepted gratefully. At 12:30 P.M., George Privetera, her landlord, came by to collect the $15 weekly rent. He held Joann in high regard. Before she took the apartment she had asked innumerable questions—“Is it respectable? Will I be safe here?”—and she had insisted that he tell her about the other tenants. She kept the place spotless—often he found her on her knees scrubbing the floor—and her blinds were always drawn because she once glimpsed a Peeping Tom training his binoculars on her windows from a neighboring building. As she paid her rent (she never allowed him to enter, but kept him standing in the hall), he noticed through the partly opened door that she had done her breakfast dishes and had been studying a religious tract on her kitchen table. Later her fountain pen was found under it, as if her murderer might have surprised her as she made notes for next day’s Sunday School class.]

At 3:25 on the floor above her apartment, Kenneth Rowe, a 22-year-old engineering student at Northeastern University, was alone, studying, when he heard footsteps outside in the hall. He would have paid no attention save that for two preceding nights his wife Sandra, 21—now out at the neighborhood laundromat—had complained someone was “sneaking about” the halls. Rowe tiptoed to his door and listened.

The footsteps approached, and stopped. He heard someone knock on the door directly opposite theirs. Apparently no one was home: a moment later the knock sounded on his door. He opened it to see a man about twenty-seven with shiny pomaded hair, wearing a brown jacket, a dark shirt, and dark green slacks. “Does Joann Graff live here?” he asked. Rowe could not see his features clearly because the man’s hand was rubbing his nose as he asked his question. He pronounced it “Joan,” not “Jo-ann,” as her friends did.

Rowe said, “No, she lives just below the apartment you were knocking on before.”

The man mumbled thanks and was already walking down the corridor. He vanished at the turn of the stairs. A moment later Rowe heard a door open and shut on the floor below. He assumed Joann had opened her door and let her visitor in.

At 3:30, Mrs. Johnson telephoned Joann to say her husband would pick her up at 4:30. There was no answer. The Johnsons, who attended the same church, had met Joann through the minister, the Reverend Kirstips Valters, after Joann asked his help in introducing her to people in the congregation.* Repeatedly at 15-minute intervals Mrs. Johnson called, without an answer. At 4:40, Mr. Johnson decided to drive to Lawrence anyway. He hurried into Joann’s building and rapped loudly on her door. All was silence. He did not know it, but death had preceded him.

The morning before—Friday, November 22—a neighbor down the hall from Joann heard someone outside her door. Suddenly her attention was caught by a piece of white paper being slipped under her door, perhaps two inches. Now it was slowly being moved from side to side. There was no voice. Was it a prank, or someone seeking to tantalize her into opening her door? Too terrified to move, she remained rooted where she stood, watching the paper move back and forth, like a person hypnotized, for what seemed an unendurable time. Suddenly it was withdrawn. She heard footsteps move away. Then, silence.

Had it really happened? Was it a delusion?

No one at 54 Essex Street knew more until the discovery Sunday of Joann Graff’s body as she had been left murdered in her apartment that Saturday afternoon, November 23, 1963.