What Lies Within: The Haunting of the Summerwind Mansion

The mansion's restless spirits drove out multiple families. Today, it stands in ruin.

Deep within the woods lining the shores of West Bay Lake stand the remains of Summerwind Mansion. Long said to be the most haunted house in Wisconsin, the legends surrounding the house are as plentiful as the owners who have tried to live within its walls.

While the spooky stories about the house still linger on its grounds, the same cannot be said for the people who attempted to call Summerwind home. Today, it stands in ruins, burned to the ground after being struck by lightning. Long before the fire, the house played host to restless spirits, demonic activity, grisly discoveries and even a mysterious case of a disappearing skull.

The house may be gone, but the many mysteries of Summerwind Mansion remain, waiting to be revealed.

It seems the house was haunted from the start. U.S. Secretary of Commerce Robert Lamont was the first owner, purchasing it in 1916. The house was used as a vacation home for Lamont and his family. Over the next 15 years, the family experienced some odd happenings inside the walls of the seemingly peaceful retreat.

Long after moving in, the Lamonts began to share strange stories with their friends and neighbors. They spoke of objects that moved by themselves, unexplained noises echoing from seemingly empty rooms, and shadows that flitted from room to room.

Though the family found these occurrences strange, they were never enough to stop the Lamonts from visiting the house. That is, until one evening when the ghosts of Summerwind made themselves known.

According to Lamont, he and his wife were dining one evening in the kitchen when the basement door flew open of its own accord. Startled, the couple watched in horror as the apparition of a man materialized from the basement.

Believing the specter to be an intruder, Lamont reached for his gun and fired two shots. Each bullet passed through the mysterious figure with no effect. The couple fled, never returning to the house. The bullet holes from the fired shots were left in the basement door, a lasting mark of their time in the house.

Related: A Haunting at Caledonia Mills: The Chilling Case of the Mary Ellen Spook Farm

After sitting empty for years, Summerwind was sold in the 1940s to the Keefer family. The Keefers also used the house as a vacation home and sometimes rented the large property out to visitors.

Many tenants claimed that Mrs. Keefer rarely set foot inside the house, typically handing the keys to guests and leaving them to their own devices. In the early 1970s, the house was once again put up for sale and purchased by a new family. With the arrival of the Hinshaws, the haunting of Summerwind Mansion began again.

Curious to learn more about the haunted history of the Summerwind Mansion?

The true story of the Lamont Mansion, which was meant to host a president—but instead become a home to the paranormal. Join author Devon Bell for a glimpse through the shattered windows of the most specter-laden spot in the Badger State . . . includes photos! 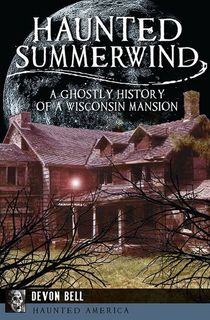 Arnold and Ginger Hinshaw moved into the house with their six children intending to restore the dilapidated home to its former glory, but could find no local contractor willing to help them for fear of the house and its haunted reputation. Undeterred, the family decided to do the work by themselves.

Arnold discovered a hidden crawl space while painting a bedroom closet. Unable to fit inside, he sent in his youngest daughter, Mary, to investigate. Inside the sealed room, she discovered a pile of bones and a human skull with knotted black hair still attached. They put the skull back and sealed up the crawl space without alerting the authorities.

Years later, they would reopen the crawl space and find only an empty space. The skull and bones seemingly had vanished into thin air.

Ginger and her children began to feel like they were being watched in the house. Then, unexplainable noises were heard coming from empty rooms. Furniture and objects were moved without anyone nearby. One afternoon, an apparition of a woman appeared before Ginger in the dining room.

Arnold too found himself tormented by the spirits. He began to suffer from insomnia and reportedly took to playing the Hammond Organ at odd hours of the night. He claimed the music kept the demons at bay. When Arnold lost his job, the couple began having marital issues.

Finally, due to the stress of the previous months, Ginger began to contemplate suicide. The family could take no more. After just six months, their hopes of turning the house into a dream home had become a living nightmare.

Ginger and the children moved out to live with her parents. Soon after, Arnold left as well, leaving the property empty and abandoned once more.

Related: Baleroy Mansion: The Most Haunted House in Philadelphia

A few years later, apparently unaware of his daughter’s harrowing experiences in the house, Raymond Bober, Ginger’s father, decided he would purchase the property, finish the renovation and turn it into a restaurant and inn.

During the construction of the restaurant, Ginger’s brother reportedly saw an apparition from the second floor. He ran down to the first floor, where he witnessed a residual haunting in the form of a “replay” of the Lamonts' confrontation with the ghost in the kitchen. He even reported hearing the gunshots and smelling gun powder. Like others before him, he left and refused to return.

Construction workers and contractors complained to Bober that their tools and blueprints went missing. Stranger still, they claimed that dimensions in various rooms seemed to change as they worked, never matching the blueprints or dimensions they’d only just recorded. Unable to work with the strange goings-on, many workers quit the project, refusing to ever enter the house again.

Fascinated by the paranormal activity taking place, Bober began communicating with the spirits using Ouija boards. He even underwent a hypnosis session in further attempts to contact them.

Later, he described what had taken place while he was under, detailing a metaphysical journey to the basement of the property, where he found the deed to the house. It was signed by a man named Jonathan Carver.

Bober came to believe that Carver was a frontiersman who not only built the house but also owned, at one point, a third of Wisconsin’s land. However, after searching the basement, the document was never recovered.

Eventually, the project was abandoned altogether. Raymond Bober went on to pen a book in 1979 titled The Carver Effect, about the supernatural events he had experienced during his time at Summerwind.

And so the house sat empty once again, until it was purchased in 1986. Three investors hoped to turn the mansion's fortunes around. Unfortunately, during a storm in 1988, the house was struck by lightning and burned to the ground, leaving only the stone chimneys and foundation standing, which remain to this day.

Since then, the legend of Summerwind Mansion has grown, luring locals and paranormal thrill seekers alike to explore the haunted lands and remains of the house. According to those who have walked among the ruins, the house may be gone, but the ghosts are as restless as ever.

This Story Was First Published on Occult Museum.

21 Terrifying True Horror Stories That Will Keep You Awake Tonight

A Walk in the Woods: 7 of the World’s Most Haunted Forests and Woodlands