Rajneeshpuram: A Shocking Look at the Creepy Commune Featured in Wild Wild Country

In My Life in Orange, a former Rajneeshee writes about his childhood as a member of the infamous sex cult.

We’ve all heard about the Kool-Aid-slurping Peoples Temple and the Nike lovers of Heaven’s Gate, but the Rajneesh “sex cult” has largely flown under the radar. Netflix’s latest docuseries, Wild Wild Country, is here to rectify that with a six-part chronicle of the group’s rise and catastrophic fall.

In the 1970s, an India-based guru named Bhagwan Shree Rajneesh introduced a revolutionary combination of Eastern and Western philosophy. Between his promise of enlightenment and laissez faire approach to sex, Bhagwan’s teachings appealed to the disillusioned masses of the Vietnam-era—earning him thousands of red and orange-robed followers from around the globe. By 1981, he was the leader of “Rajneeshpuram,” a man-made paradise carved out of a neglected stretch of land in the state of Oregon. To Bhagwan’s eclectic group of devotees, it was the first step in an experiment that would spark a global movement of peace, love, and equality.

But the conservative residents of Antelope, located just 19 miles away, thought differently. With the flood of Rajneeshees, they worried that their quiet, low-conflict lifestyle was in jeopardy. The discovery of their new neighbors' mediation practices soon thereafter—a combination of violent, nude wrestling and a happy-go-lucky dance party—was the straw that broke the camel's back. Suddenly, battle lines were drawn. Everyone, including the Rajneeshees, was armed to the teeth.

The bulk of Wild Wild Country tracks this escalating war between the Antelope natives and “the strangers in red,” focusing on the machinations of Bhagwan’s right-hand woman, Ma Anand Sheela. Ruthless, snarky, and unafraid of the press, Sheela operated straight out of the Cersei Lannister handbook to protect her community—resorting to mass poisonings, assassination plots, and arson. In fact, her efforts resulted in the largest bioterror attack in U.S. history.

Want to learn more about cults? Sign up for The Lineup's newsletter and receive our eeriest investigations delivered straight to your inbox.

Watching the rapid decline of Rajneeshpuram—from Sheela's sinister schemes to Bhagwan’s desperate flee in 1985—is something you need to see to believe. But while Wild Wild Country offers insight into Rajneeshpuram’s most explosive moments (literally), it did leave us curious about its more average followers, who were largely kept in the dark. What was their everyday like, and what really went on in those wacky meditation sessions?

If you look closely at the final minutes of Wild Wild Country, you’ll see a display of books written on the subject of the Rajneesh cult. My Life in Orange, by Tim Guest, is one of them—and it’s a must-read for anyone looking to get a different, more in-depth perspective of the day-to-day at Rajneeshpuram.

From the time he was six-years-old, Tim Guest was dragged him from ashram to ashram by his mother, who dedicated herself to Bhagwan but forgot her son in the process. Renamed "Yogesh," Guest was left to his own devices and witnessed the strange practices of his fellow "orange people," which included scream therapy, the free flow of sex and drugs, and more. It was then that he began to notice the hypocrisies of their enlightened guru—a man whose teachings seemed incongruent with his love of Hollywood types, Rolls Royces, and diamond watches. From his arrival at the Oregon commune to his eventual exile, Guest recounts his experience as a Rajneeshee in his memoir, revealing how life was often more hell than heaven.

After you watch Wild Wild Country, read My Life in Orange. 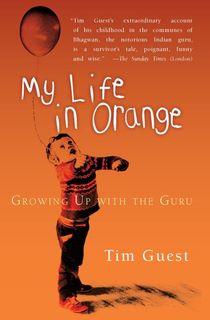 Want to learn more about cults? Sign up for The Lineup's newsletter and receive our eeriest investigations delivered straight to your inbox.