Kari Swenson: The World-Class Biathlete Who Was Abducted and Held Captive in the Woods

Her traumatic ordeal will keep you up at night.

UPDATE: In August 2017, Don Nichols was released on parole. The 86-year-old man served 32 years behind bars for the 1984 kidnapping of Kari Swenson and killing of Swenson's friend Alan Goldstein.

On July 15, 1984, athlete Kari Swenson was on a training run near Big Sky, Montana when she encountered Don and Dan Nichols. The father and son survivalists did not mean well. In fact, they hoped to make Kari Dan’s bride—so they captured Kari and dragged her deep into the woods, with plans of starting a new family in the wilderness.

Kari was found 18 hours later, tied to a tree and suffering from a gunshot wound to the torso. Her friend, Alan Goldstein, lay dead beside her—shot and killed by Don when Alan stumbled across the campsite.

Miraculously, Kari was still alive. But the father-son duo were nowhere to be found…

Forest rangers, SWAT teams, and antiterrorist units scoured Montana’s backcountry in search of Don and Dan Nichols. It would be five months before authorities caught wind of the pair. After receiving a tip about a suspicious campfire in the dead of winter, Sheriff Johnny France went to investigate alone—leading to a showdown that will have you on the edge of your seat.

Kari Swenson’s harrowing ordeal was recently featured on an episode of Investigation Discovery’s series Your Worst Nightmare. The episode, titled “Into the Wild,” features a reenactment of the horrific events that took place in 1984. Sheriff Johnny France and author Malcolm McConnell recount this terrifying true crime in their book, Incident at Big Sky. 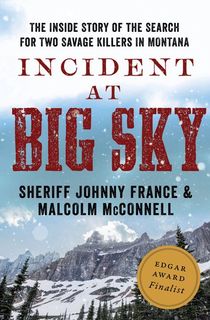 Kari was halfway around the small lake now. The trail was hardly wider than a deer path, and steep, following the sharp contour of the pothole lake shore. She splashed through a stream and puffed up a sharp rise. Here the pines were even thicker than up on the ridge. But ahead, to the left, the trail opened again, a clear route, cutting up the slope among the dense deadfalls to rejoin the ridge. That should be Jack Creek Trail, and if she followed it, her route would cross the logging road again, and she could head back to the trailhead where she’d parked her car.

Just before the end of the lake, the trail climbed another rise into dense timber, and Kari stared intently at the ground to avoid injury in the roots and stones.

Two men appeared, not 10 feet away. The older man stood to the left, one foot on the trail. The younger man was half hidden in the trees to the right, five feet off the path. Her first reaction was surprise, then apprehension. These men were dirty; they did not look like fishermen from Big Sky. And they stood very still, watching her with flat dark eyes, expressionless, just staring at her body. Now she saw their green backpacks, propped against a tree at trailside.

Kari slowed, breaking stride. Two rifles leaned against the tree near the packs. July was a long time before any legal hunting season, and these two guys with their grungy beards and sooty clothes sure did not look like wardens from the Fish and Game. As she stumbled ahead, she realized that they both wore holstered pistols and thick-bladed hunting knives.

The older man’s face was almost hidden beneath a matted gray beard and the brim of a greasy cowboy hat. But the intense blue eyes frightened her. (“Feral” was the word they used when a domestic animal went wild. That was the word for his eyes.) Even on first sight, she realized that he was not normal.

She slowed more when she saw the younger man was staring at her body, his lips grim. The Day-Glo Sasson jogging shorts billowed over her hips, but the old blue T-shirt was plastered sweaty tight across her chest. He bore a certain resemblance to the older man, but his beard was blond and thinner. His eyes were deep brown.

Kari was shaky and dry-mouthed. But she did not panic. These two men were definitely grungy, some kind of rough misfits, but they had not actually attacked her. She did not intend to give them the chance. She decided to run right past them, up the ridge and back to the Jack Creek logging road where there might be hikers.

Without a word, the older man stepped onto the trail, blocking her way. Kari stumbled to a stop, but still overcame the natural panic reaction rising inside her. Maybe, she thought, if I just ask directions, I can keep the conversation short, then turn around and leave.

“Hi,” she began, keeping her tone normal. “Is this the trail to Jack Creek?”

“Yeah,” the old man answered. He formed a quizzical smile. “This is the Jack Creek Trail all right.”

“Thanks,” Kari blurted out, then spun to dash back along her original route.”

Before she could complete her turn, the older man seized both her wrists in a grip so tight she felt her bones might crack.

“Please let me go,” she cried.

“No. We don’t want to let you go.” The old man’s voice was amazingly calm, as if he were discussing the weather.

Kari struggled against his grip, twisting her weight right and left. “What do you want?” she demanded, anger overcoming her initial fear. “Why won’t you let me go?”

“Well,” he began, “we don’t meet many beautiful women up in the mountains, and we just want to talk to you for a while …” He shrugged. The boy remained silent, staring. “Just to carry on a conversation,” the older man added.

Kari was not taken in for a moment. She understood exactly what they wanted from her. “Well,” she said coldly, “I sure don’t want to talk to you. Let me go.”

Again she twisted. Again the old man held her tight. They were so close together that she was engulfed in his stale, smoky odor.

“All we want’s some conversation,” the old man said.

“I know what you want.” Kari’s outrage grew as her fear and frustration mounted.

“Well,” the old man said, almost indignant himself now, “we’re not going to rape you, if that’s what you’re worried about.”

“I don’t believe you,” Kari said. “What do you really want me for?”

The old man formed a lopsided smile beneath his beard. “Just for conversation … like I said.”

Kari had stopped struggling momentarily, but now she resumed. Once more, his grip defeated her. He did not appear to be exceptionally strong, but she realized his lean frame was deceptive.

Kari was not about to give this creepy scarecrow her real name, and she was prepared to use the question to her advantage. “Sue,” she muttered.

“You work down at Big Sky?”

“He leaned closer to watch her eyes. “You married?”

“So what’s your husband’s name?”

“Bill Soa,” Kari answered, this odd name springing to her mind. Perhaps she might have thought that the name had a rugged working-class ring to it, evocative of a vengeful young husband.

“Where’s your wedding ring?” he demanded, twisting her left hand open to examine the fingers.

“I … don’t wear a wedding ring,” she said. “Working in the kitchen with those machines and all, a ring could get caught and rip your finger off.”

The old man examined her hand more closely. “I don’t believe you. It doesn’t look like you’ve ever worn one.” There was a cold, bullying dogmatism to his manner now, as if he were being rational and Kari herself was creating a problem.

“No,” Kari said desperately, “I don’t wear one, and my husband doesn’t either because he works in the kitchen, too.”

“You believe her?” The old man turned to the boy.

For the first time, the young man spoke. “She’s lying. All women lie.” His voice was flat, a bizarre copy of the old man’s.

The boy moved closer now, and she could smell the same rancid, smoky odor as the old man’s. But he didn’t seem as calm about this whole nasty business as the older man. The boy was searching about to get a better view through the trees both back down the trail and up across the ridge. Clearly he was worried that a hiker or fisherman might stumble on them, out here in the open on the lake shore trail.

“Please let me go,” Kari said, looking up again. “You don’t want to get involved in something like this.”

The old man did not answer.

She turned to directly address the boy for the first time. “You’re young,” she pleaded. “You don’t want to get involved in this. It doesn’t make sense.”

Mosquitoes swarmed on her legs and arms now, but she was powerless to brush them off. For an uncertain moment, no one spoke. Finally, the old man asked: “Well, Danny, what do you think, shall we keep her?”