On Mother's Day 1985, Kathryn Eastburn and her daughters, Kara and Erin, were found murdered in their home. 25 years later, surviving family saw justice.

On Mother’s Day, 1985, the bodies of Kathryn Eastburn and two of her children, Kara and Erin, were found brutally murdered in their Fayetteville, North Carolina home. The Eastburns were a military family, and matriarch Kathryn was used to raising her three children—five-year-old Kara, three-year-old Erin, and 21-month-old Jana—alone, while her husband served in the Air Force.

The Eastburns’ neighbors, Army sergeant Bob Seefeldt and his wife, made the discovery.  The couple became worried when they realized they hadn’t seen Kathryn and the children in a few days. Upon hearing baby Jana’s cries, the Seefeldts knew something terrible had happened. They were right.

It was determined that on May 9, three days prior to the discovery, Kathryn, Kara, and Erin had been murdered. The suspect? A fellow member of the Fayetteville military community. Army Staff Sergeant Timothy Hennis had answered the Eastburns’ classified ad offering a dog for sale just days before the murders took place. Prosecutors built their case against the suspect, but putting him away was anything but easy. While the first trial led to a conviction, Hennis appealed the ruling and was found not guilty. Then, prosecutors tried Hennis a third time after introducing new DNA evidence and discovering a loophole in double jeopardy laws. This new trial led to a guilty verdict.

Today, Tim Hennis sits on death row in an Army prison. But will his defense team file yet another appeal? Scott Whisnant’s true crime book Innocent Victims, which includes a new epilogue detailing the controversial third trial and conviction, examines a case that you won’t easily forget.

Read on for an excerpt from Innocent Victims, and then download the book. 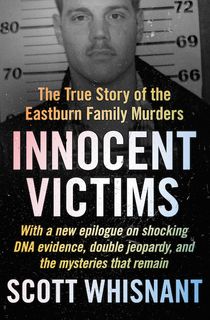 But by Sunday morning, he was worried about those newspapers piled up, the car in the same place, and the stroller next to the side door, where it had been for three days.

“I’m going over there to see if anyone’s home,” he told his wife.

He picked up the Sunday paper, dated May 12, 1985, and tossed it and the others into the carport. He sidestepped the baby’s stroller and knocked on the side door. No answer. Then he rang the front doorbell a few times. Nothing.

He rang it again. A baby cried. Seefeldt thought it sounded like Jana, 21 months old. He rang the doorbell again. Another cry.

Katie Eastburn couldn’t possibly have left her toddler alone in the house. Seefeldt wondered if he heard right. But what else sounds like a baby crying? He called Jennette over to see if she could hear the cry. He rang again.

“Call somebody,” Seefeldt instructed with more confidence than he felt.

Jennette fumbled through the phone book, but the pages shook in her hands. She found a listing for Julie Czerniak, the Eastburns’ baby-sitter who lived a few houses away.

“Julie, “ I think something terrible has happened,” she said.

Julie gave her the Eastburns’ number and Jennette called. The phone rang and rang. “Please let her answer,” Jennette whispered. She let it ring some more. She next tried the Cumberland County Sheriff’s Department. At 12:53 P.M., the dispatcher relayed a child-neglect call.

Deputy William Toman was patrolling nearby on Sante Fe Drive, checking stores along Bragg Boulevard until his shift ended. He heard the call and figured he was closer to Summer Hill than anyone. Toman told the dispatcher he’d handle it and arrived four minutes later at 367 Summer Hill Road.

Julie beat Toman to the house. “Jana’s standing there in her crib,” she told Seefeldt. Why wasn’t someone going in to get her? Julie ran to the back of the house and tried to open a bedroom window.

Deputy Toman showed up in no mood for nonsense. The sheriff’s department had procedures to follow on child-neglect calls, and Toman was not one to stray from procedures. He tried to make sense of what Julie was saying, then dismissed her as loud and irrational. Something about a child in a crib. Seefeldt was still irritated that Julie was trying to break into the house. “All right. I’ll handle it from here,“ Toman said before they could worry him further.

Toman checked all the doors and windows. No forced entry. He found a note jammed inside the storm door. “Mrs. Eastburn, get in touch with your husband by phone. Deputy Price.”

Toman shrugged and rang the doorbell. No one stirred. No baby cried. Seefeldt felt a little foolish.

Neighbors began to gather in the street.

Toman’s sergeant drove up and was talking to the young deputy on the front porch. “What do you think we should do?” the sergeant asked. Toman wasn’t sure.

Then he heard the crying. He leaned over the porch railing, pressed his nose to the bedroom window and cupped his hands at his temples. Little Jana Eastburn stood in her crib, her arms outstretched to anyone. “I’ve got no choice,” Toman told his sergeant. “I’ve got to go in.”

Toman stepped over the railing, sliced the screen, and lifted the window. He poked his head in and smelled death.

Jana wanted out of that room. Her white pajamas with blue and yellow flowers reeked. She was pale and gaunt, her eyes puffy from so much crying. A slew of stuffed animals and toys had been placed in her crib, as if someone expected Jana to need entertaining for a while. She had tossed them onto the floor.

Jana wrapped both arms around Toman’s neck, digging her tiny fingers into his back. “It’s all right,” he told her. “It’ll be all right.”

He passed Jana out the window to Seefeldt and found a neatly stacked pile of Pampers next to the crib, along with a bottle. He handed the diapers and bottle to Seefeldt and turned to face the rest of the house.

The smell was getting stronger. He steeled himself for a grisly body count. “It didn’t matter how many bodies I found,” he would say later. “I was more worried about what I was going to find alive.”