London’s Highgate Cemetery and the Curse of the Highgate Vampire

It wasn’t long before rumors of Satanism and occult activities circulated.

Opened in 1839, London’s Highgate Cemetery was once a fashionable destination for the living and the dead. Its lush greenery and winding cemetery paths charmed visitors throughout the Victorian era, while notable souls like novelist George Eliot, poet Christina Rossetti, and economist Karl Marx all called the tranquil setting their eternal home.

But dark clouds were gathering.

By the dawn of the 20th century, Highgate was overfull with bodies. When Germany bombed London during World War II, several vaults were destroyed and left cracked open. By the 1960s, the cemetery had fallen into disrepair and was viewed as an eyesore. 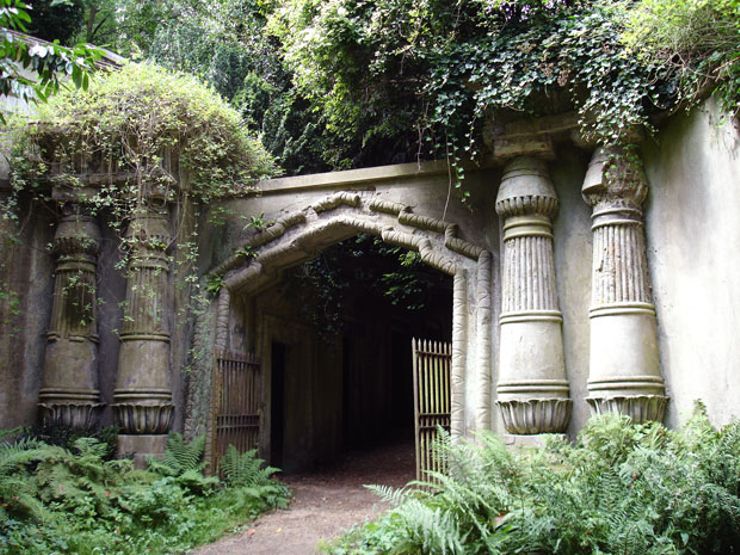 By the 1970s, trespassers regularly slipped into Highgate Cemetery at night. It wasn’t long before rumors of Satanism and occult activities circulated. While visiting a relative’s grave, one elderly woman claimed to be followed on five separate occasions by “odd people” who never spoke a word. She believed they were conducting “strange ceremonies.”

Related: 10 Most Haunted Places in London

Of the individuals who regularly entered Highgate, two young men with clear interests in the occult emerged. Their names were David Farrant and Sean Manchester, and they soon became the chief voices of the Highgate mystery. Manchester, a self-styled vampire hunter, presided over the British Occult Society and founded the Vampire Research Society; Farrant, a wiccan and mystic, established the British Psychic and Occult Society. Both noted the level of destruction in the cemetery, especially Farrant, who remembered:

Vaults had been broken open and coffins literally smashed apart. One vault near the top gate was wide open and one could see the remains of a skeleton where it had been wrenched from a coffin. Another vault on the main pathway had been thus entered and one of the coffins inside, set alight. 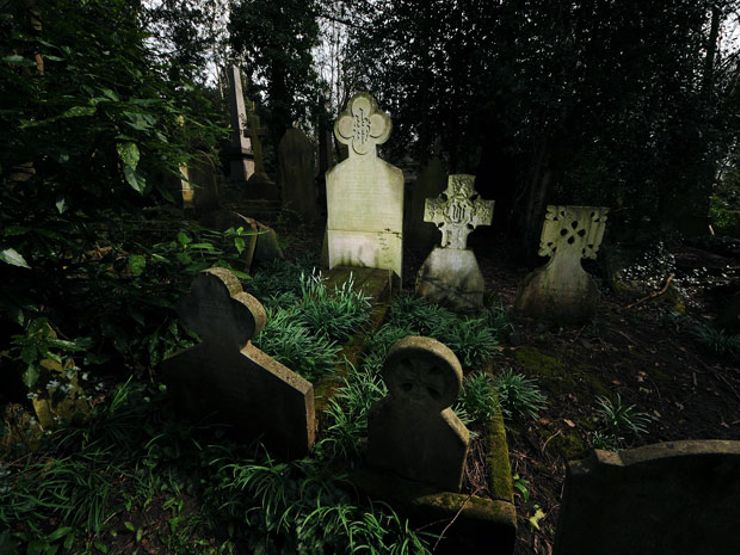 Authorities struggled to suppress the vandalism and crack down on trespassers. But residents were not necessarily convinced that people were to blame. Sightings of a shadowy figure in Highgate surfaced. The British Occult Society received two specific claims from eyewitnesses—both described an eerie encounter a “tall dark spectre” that temporarily paralyzed them.

On December 21, 1969, Farrant decided to spend the night in Highgate. He wanted to confirm or debunk the concerns of this ghoulish figure. But when he approached the cemetery gates at midnight, he saw a tall person wandering around inside the cemetery. Inching closer, he estimated the figure to be over seven feet tall. He later recalled seeing two eyes at the top of an inhuman shape.

Farrant was overwhelmed with fear; he turned away. When he turned back, the figure was gone.

Farrant wrote a letter to the Hampstead & Highgate Express to inquire about any other unusual experiences in Highgate. Responses poured in, with most referencing a towering ghost that had been appearing for several years. Other stories concerned a tall man in a hat who walked across Swains Lane—a street that runs through the middle of the cemetery—and disappeared into a cemetery wall. Some said that the bells inside the cemetery’s chapel rang as the man advanced. 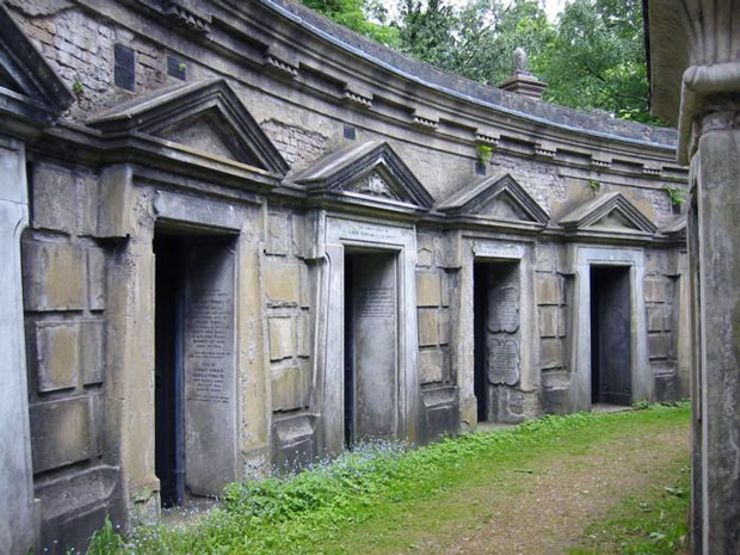 Not long after Farrant’s original letter, fox carcasses and the remains of other animals turned up near Highgate. The animal corpses were reportedly drained of blood with throat lacerations.

Such reports led to speculation that Highgate had a vampire—a royal vampire, as far as Manchester was concerned. Manchester told the Hampstead & Highgate Express that the ghoulish figure was the King Vampire of the Undead from Wallachia. He believed the regal bloodsucker was once a medieval nobleman who practiced black magic. Followers used a coffin to smuggle the undead king into England in the 18th century. He eventually came to rest in the grounds of Highgate Cemetery—until someone conjured him from slumber.

And with that, the Highgate Vampire was born.

The tale energized the public. Escalating the frenzy were Farrant and Manchester, who had grown increasingly combative toward one another in the press. During a joint March interview with ITV News, the pair declared through a series of dares that a vampire hunt would commence in Highgate Cemetery on the night of Friday the 13th. 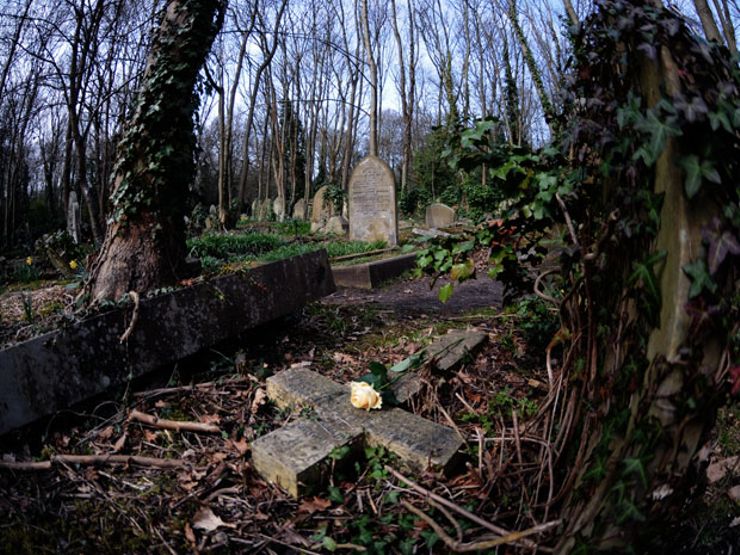 Journalists and TV crews lined the cemetery gates—as did a crowd of onlookers and would-be vampire hunters. Police struggled to maintain the throng, but were soon overwhelmed; individuals scaled the gates and raced through the cemetery in search of the vampire.

The hunt failed to turn up the alleged creature, of course. Though some who took part did claim to encounter a figure lurking in the cemetery.

Farrant and Manchester continued their paranormal investigations at Highgate Cemetery throughout the 1970s. Farrant was even arrested one night after police found him near the cemetery with a crucifix and wooden stake. The relationship between the two men continued to deteriorate; both considered the other a fraud and numerous duels to the death were proposed. When Manchester released his own account of the Highgate mystery called The Highgate Vampire, Farrant responded with Beyond the Highgate Vampire. 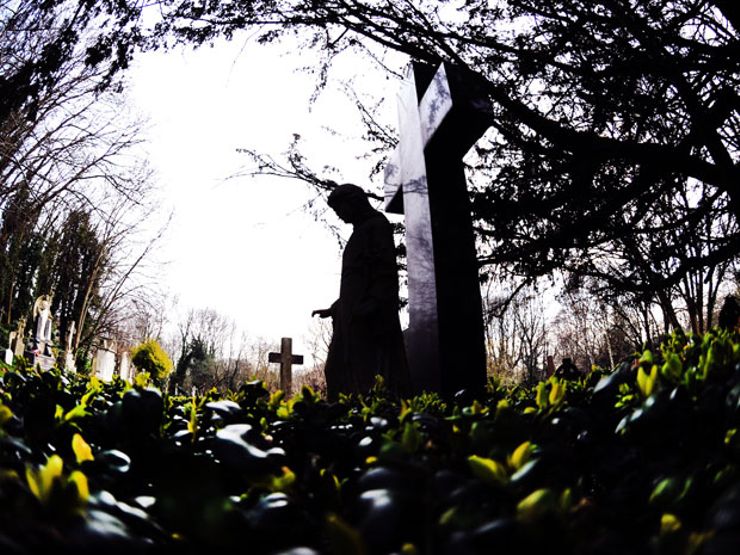 Highgate Cemetery, meanwhile, benefited from the increased media attention. In 1975, the Friends of Highgate Cemetery Trust was established. Both sections of the cemetery were acquired by 1981, and have since been maintained by the Trust.

As of 2013, the West Cemetery is only accessible by an hour-long guided tour—which also includes access to the East Cemetery. The East Cemetery can either be toured alone or with a guide. Touring either section requires a ticket purchase.

While the hysteria surrounding Highgate and its alleged vampire have quieted, the beautiful grounds are still worth a visit. If you do schedule a trip, however, it may be wise to grab a clove of garlic—just to be safe.

Want more chilling tales? Sign up for The Lineup's newsletter, and receive our eeriest tales delivered straight to your inbox.