The Spirit with Many Names: A Dark Entity in New Orleans

A malicious spirit resides in an old home in New Orleans' French Quarter.

It is the second thing we’re told upon walking down the narrow, cobble-stoned corridor to the back of the property for our investigation at the Dependency.

“He’s a jerk,” admits my co-worker Michael Bill as he opens the rickety gate with a jiggle and a twist of an old-fashioned key. “Likes to say that he’s a demon, but we all know that demons don’t give their names.”

Beneath a dark blanket of stars and clouds, we each duck through an old, wooden door into what was once the property’s slave quarters. The room is sparsely lit, and my memory from a prior visit summons up my current surroundings: a built-in bookcase to my left, a century-year-old fireplace in the center of the room, knickknacks and mismatched furniture every which way.

The property is an investigator’s dream location: former slave quarters, a brief stint as a makeshift Civil War hospital, and a hub for strange, inexplicable deaths like one 19th century man named Johnny, who was stabbed two blocks away but dragged his broken body over the gravel, inch by inch, until he perished on the property’s front door step.

And if all that turbulent history doesn’t play a part in the house’s haunted nature, then the fact that it now belongs to a Voodoo priestess officially seals the deal.

Since renting the Dependency out for nightly paranormal investigations, Michael Bill and my other coworker, Elaine, have befriended the spirits within.  There is Chloe, a ghostly girl no more than nine years old, who is fond of games like “chase the MEL meters” (in which Michael Bill or Elaine setup the devices all over the house and urge her to turn them on as she plays).  Johnny, too, makes his spectral presence known, though he often has to be enticed with the lure of lighters or other small trinkets.  Ladies-man Kurt is only ever found in the first floor restroom, pinching ladies’ bottoms and reminding all that he might be dead, but that he is still interested.

But he-who-shall-not-be-named is not treated so fondly, not by Michael Bill and certainly not by Elaine, who refuses even to speak of his dark presence to guests.

It’s unfortunate, perhaps, that he refuses to be ignored.

Encounters with the Dark Entity at the Dependency 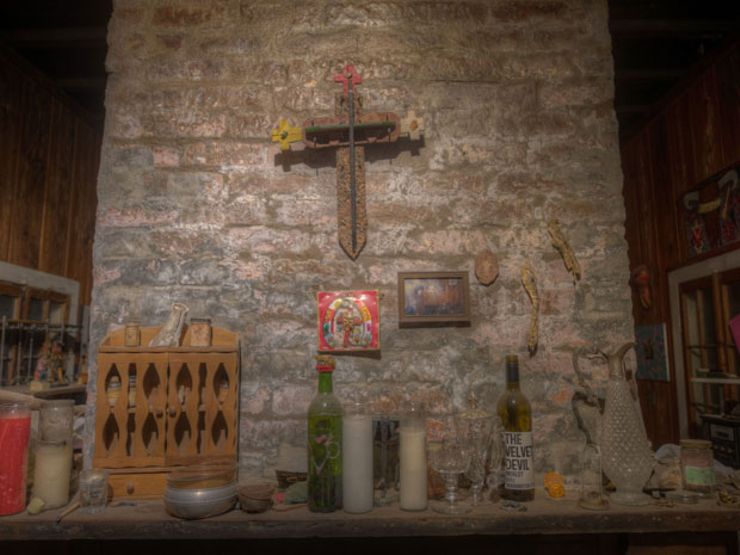 Within the paranormal world, the entity at the Dependency is known as a “dark head.” These spirits aren’t demons, but they aren’t exactly human either. They sit, in a way, in the “in-between,” a once human spirit plagued with a darkness that never fades after the body succumbs to death.

Michael Bill and Elaine, when they choose to address him, call the negative entity at the Dependency, “Phillip” or “Samuel.”  These names are are chosen to lessen the power that it believes it has.

The entity’s attempts to frighten those who visit the Dependency for a night of ghost hunting simply can’t be numbered.

Over a year ago, when Ghost City Tours first signed a lease for the property, the General Manager and CEO stayed for part of the night to investigate.

As Gretchen, the GM, roamed the courtyard with an audio recorder, she glanced up and noticed the CEO standing on the landing of the external stairwell, poking his head in and out of the doorway leading into the second floor. She watched in confusion, wondering why he didn’t just go inside. For nearly ten minutes, he repeated the motion: Ducking in, ducking out.

Later on, she questioned him about it.

His response sent a chill skittering down her spine, because he had never actually gone up to the second floor, and he had the video evidence to prove it.

Related: 15 Real-Life Paranormal Encounters That Will Keep You Awake Tonight

The dark entity had made his mark, creating a doppelganger apparition that remained with Gretchen for days after.

Another night, this one just two months ago. Elaine and a husband and wife pair were upstairs holding an EVP session, when the husband stood up. The original wood floors creaked under his weight as he entered the small, open-layout kitchen. He twisted around, voice recorder in hand, when he heard the audible gasp of his wife.

Then, the wife whispered, “There’s a dark shadow … behind you.”

Elaine saw it too. Later, they would agree that the apparition had been about 6’1 in height, wearing a low brimmed hat tugged down over his head. But in that exact moment, there was only the frantic beeping of the MEL meters, and the faint sound of tourists bustling down the street at the very front of the property.

The husband didn’t move. He never once saw the entity, but he felt the dark energy swirling behind him . . . as well as the heavy, cold hand that traced a finger all the way down his spine.

Exorcising the Entity From the Dependency 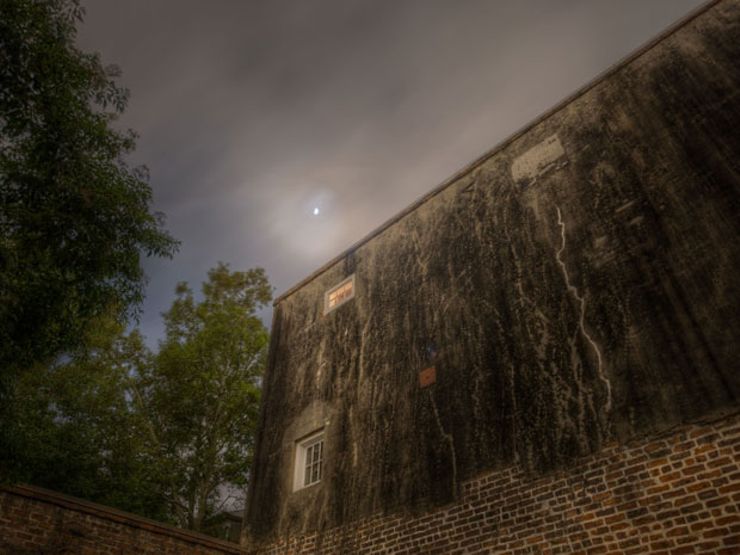 Interactions with the entity grew worse.

Guests experienced lightheadedness on the second floor.  Angry scratching sounds emanated from the second floor closet. Downstairs, on the first floor, eerie growling noises echoed all throughout the night, a clear attempt on the entity’s part to freak out guests who joined the hunt.

Michael Bill was done with it. He made a contentious point to laugh uproariously each time it manipulated the spirit boxes to say that its name was “Belial.”  “You’re no demon,” Michael Bill would say, “We both know it.”

Guests were both intrigued and nervous at the possibility of coming into contact with a darker presence. Michael Bill decided to put a stop to the problem.

Related: 9 Famous Female Ghosts From Around the World

As a Voodoo priest, he understood the necessity of removing a spirit from the premises . . . and as a Voodoo priest, he also had the ability to do so. He bought a small statue of St Michael, and visited the Dependency every day for nearly a week as he coerced the dark entity further and further into the statue, until he’d removed every wisp of it from the house.

From there, he left the French Quarter and brought the statue to St Vincent de Paul, a cemetery found in the Bywater neighborhood. He buried it upside down in the cemetery, both as a way to remove it from the Dependency (and replace him among the dead) but also to show the entity that it had little power in the afterlife.

For the next two weeks, Elaine commented how much different it felt upstairs.  She’d seen no apparitions and felt no sudden bouts of nausea.  “It’s so airy up there,” she told Michael Bill, “Clean. Do you think It’s gone?”

“Maybe,” Michael Bill said, knowing that he’d removed its presence from the house only temporarily.  In Voodoo, he could “buy a point,” meaning that he could command the spirits, steal them, and put them in the cemetery.

But even as a Voodoo priest, it isn’t possible to rid a location of a spirit forever.

After two weeks, Michael Bill returned to the cemetery, dug up the St Michael statue, and smashed it open to release the spirit, as is tradition.

Video footage from the investigation.

I file after Elaine as my feet hit the external stairwell, taking them two at a time. The cobbled courtyard below is nothing but a sea of darkness, and I use the camcorder viewfinder gripped tight in my hand as my sight.

The stairs creak behind me as I’m followed by my coworkers into the kitchen. I skim my feet a few inches in front of me before I commit to a step, and repeat the motion again and again until I find my shins up against the frame of a bed.

I sit down, ears straining, as I hear Elaine guide the rest of the group to the bed.

“How about an EVP session?” she asks us.

I aim my camcorder for the MEL meter positioned on the bedside table beside me, waiting in dreaded anticipation for whatever might happen. I know the stories. I’ve seen the evidence. And although this isn’t my first rodeo, the nervous energy is there.

“Is anyone here?” asks Elaine.

No one shifts, no one moves. I pretend that my hands are not slip-sliding on the camera as I attempt to hold it still.

“Have we spoken to you before?”

“Chloe, is that you here with us?”

Related: 7 Scary Toys That Freaked Us out as Kids

It isn’t Chloe. I know, because of the extreme, sudden pounding in my head. The weight is oppressive. I swallow the bile threatening to emerge, murmuring, “I feel sick. Really, really sick.”

“Is that you, Samuel?” Elaine demands, reminding me that the angry spirit in the Dependency fancies himself a ghost with many names. Phillip, Belial, Samuel. Demon. (Even though we all know he is not a demon at all).

“Samuel,” Elaine continues, her voice a harsh command, “If you’re with us, make yourself known.”

To my left, the MEL meter starts to chirp incessantly. Somebody beside me gulps.

“Turn that off, Samuel.”

On command, the meter descends into silence.

For the next twenty minutes, the MEL meter responds intelligently to our endless questions.

“Do you think you are a demon?” Beeeep. Beeeep.

“Do you stay here, always?” Beeeeeeeep.

“Were you once friends with the owner of the occult shop at this property?” I ask, voice bold even when I’ve screwed my eyes shut. The pain in my head has not eased. “Do you stay around because of her?”

At that, the MEL meter erupts, until finally Elaine snaps, “Shut that off, Samuel. It’s annoying.”

Related: 5 Haunted House Books That Will Make You Think Twice About Moving

And with the silence, the oppressive sensation in my head lifts. I inhale the musty air, panning my camcorder to the right and then to the left.

“I think he’s left,” someone murmurs, making me wonder if we’ve gotten off easy tonight.

There is no scratching, no dancing orbs, no dark, shadowy apparitions standing in the kitchen. There is no sound of the light strings for ceiling fan circling or moving about, although I’ve seen the unexplainable footage for that.

As we sit there in silence, I wonder how a spirit with many names could also have many faces . . . and the face that he’d showed us tonight was indifference: a true testimony to the fact that Belial/Phillip/Samuel is nothing but an angry spirit, pretending to be tougher than it is.

Visit this link to learn more about investigating the Dependency in New Orleans.