This lethal caregiver is suspected of killing 40 babies in medical facilities across Texas—and evaded capture thanks to a hospital cover-up.

Nothing is more shocking—or difficult to prove—than the notion of a nurse deliberately harming children. Yet inside the pediatric intensive care unit at San Antonio’s charity hospital in 1981, some staff members could reach no other conclusion.

Nurse Genene Jones was hurting kids—she had to be. The nightmarish pattern was clear. As hospital supervisors refused to deal with it, this sense of horror grew.

Babies continued to die under mysterious circumstances. Yet the concerns of parents and hospital staff went unheeded for more than a year, as disbelieving administrators, fearful of lawsuits and bad publicity, clung to a policy of maintaining a “judicious silence.”

Jones’ rampage would end only after she moved on to a small-town pediatric clinic, where eight more children stopped breathing—and a 15-month-old little girl died.

The Death Shift, the first book by bestselling author Peter Elkind, traces the entire chilling true crime tale—from Jones’ troubled childhood through her emotional trials—concluding with a frightening coda for today: Despite evidence that she killed more than a dozen children, Jones is scheduled to be released from prison on mandatory parole in early 2018.

Read on for an excerpt from The Death Shift: Nurse Genene Jones and the Texas Baby Murders, and then download the book. 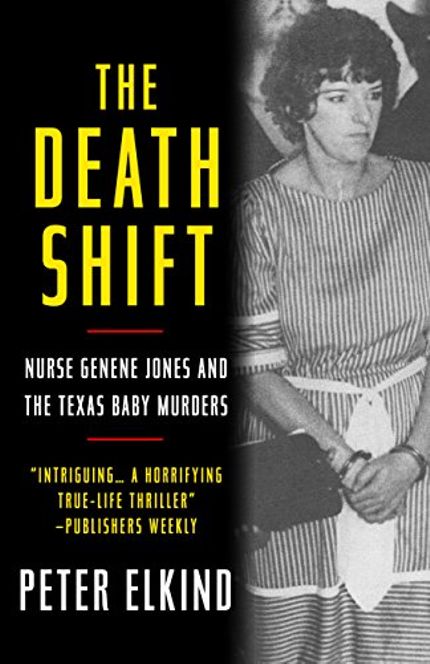 For Diana and Crecencio Hogeda, Jr., the sad news came by phone. It was not entirely unexpected. Their baby, Christopher James, barely a year old, had spent almost half his life in the hospital. Born with a severe heart defect, he had been admitted to the pediatric ICU with pneumonia and diarrhea in December 1980. In May, he developed hepatitis, and infection ravaged his body. The call had come from Christopher’s nurse, Genene Jones, who had cared for him from the beginning, who seemed so sympathetic to their ordeal. “He’s gone to play with the angels,” Genene had informed them.

After gathering the clothes in which they planned to bury their son—Diana had crocheted a special blanket—the Hogedas climbed in their car and raced toward San Antonio. The Hogedas lived in the West Texas town of San Angelo, more than two hundred miles away; they had taken Chris to the big city, to Bexar County Hospital, to make sure that he received the best medical care available. Three hours later, their eyes wet with grief and fatigue, the Hogedas walked into the ICU to view their baby’s remains. They were stunned at what they saw: Christopher was still alive! He was lying quietly on his ICU bed, hooked up to the machines; everything was just as it had been for months. The Hogedas asked for Genene. The other ICU nurses told them that she had completed her shift and gone home.

Related: 10 DEMENTED DOCTORS THAT WILL MAKE YOU SICK

Chris Hogeda was one of the children in whom Genene Jones took a special interest. She insisted on caring for him herself, day after day, for weeks. It was during this time that Genene, never one to lavish time on her own children, stopped showing up for counseling appointments with Edward. It was as though she had transferred her maternal affections from her own children—one of whom gave her trouble—to surrogate offspring who were totally under her control. “He was my boy,” she said later of Chris Hogeda.

On May 14, 1981, Genene left Chris’s room a little after 11 P.M. to report his condition to the next shift. The baby’s health was so poor that no one expected him to live long; he had been experiencing unusual episodes of irregular heartbeat. But the nurses had grown weary of Genene’s regular predictions of his demise. “Tonight’s the night,” she would announce.

As the nurses were giving report in the ICU’s break room, they heard a crash. Genene rushed out and shrieked; the child with the delicate heart condition was dangling from his bed, suspended by respirator tubing and arm restraints. Genene had left Chris’s bed rails down, and he had rolled out. She returned the child—apparently unhurt—to bed. Genene later recounted what had happened to nurses who were off that day with a laugh. The LVN (Licensed Vocational Nurse) received another written scolding for the incident, but she continued to treat the child. When Chris Hogeda died of cardiac arrest a week later, he was under Genene’s care.

Related: THE DARK HISTORY OF THE TRENTON PSYCHIATRIC HOSPITAL

Summoned for good cause this time, Chris’s parents asked Genene to remain with their son until they arrived. She pulled the plastic tubes out of the body and washed it, crying and talking out loud all the while. “I would bathe the children, and I would sing to them while I bathed them,” Genene later explained. “If that sounds insane, tough shit. If you can’t die with dignity, why live with dignity?” She paused. “We talked to them even after death. We’re not God. We don’t know when the spirit leaves the body.” After cleaning Chris Hogeda, Genene wrapped his body in a blanket. Then she settled into a chair and held the corpse to her chest for more than an hour while she waited for his parents to arrive.

Diana and Crecencio Hogeda were unaware of some of Genene’s offenses in the treatment of their son, and forgiving of the rest. On the day Chris Hogeda was buried, Genene Jones was a welcome guest at his funeral.

The death of Christopher Hogeda marked the beginning. Over the next four months, the pediatric ICU began to experience a rash of strange events and unexpected emergencies. Kids who seemed stable suddenly stopped breathing. They had seizures. Their hearts halted—or started beating irregularly. Babies pricked with intravenous needles began oozing blood, their clotting mechanisms inexplicably gone haywire. Some of the children, like Chris Hogeda, were terribly sick and expected to die; but what befell them defied explanation.

Terry Lynn Garcia was among the victims. Admitted to the hospital at three weeks of age for diarrhea and vomiting, she entered the pediatric ICU a month later after developing fever and appearing lethargic. On the night of her transfer, Terry Lynn had three episodes of abnormally slow heartbeat, called bradycardia, before her heart stopped entirely. Doctors revived her, but she arrested again the next evening and was barely rescued with drugs, two jolts of electric shock, and ninety minutes of CPR. The next day she started bleeding, and her blood pressure plummeted. She developed breathing problems that required a respirator. After two more arrests, she died at 6:15 P.M. on August 11.

Patricia Sambrano, three months old, entered the ICU two days after Terry Lynn’s death. Hospitalized after going into seizures following a routine inoculation, she arrived at 7 P.M. in the unit, where she was placed on a respirator and under Genene Jones’s care. Patricia arrested that evening, but doctors revived her. Nurses on the next two shifts noted no seizures and described the girl’s condition as stable. Back on duty, Genene reported seizures that were worsening at 5:30 P.M. The child soon arrested, and doctors saved her again. After a third arrest, she died at 9:36 P.M. on August 14.

Four-month-old Paul Villarreal died in late September. Taken to surgery for an elective procedure on his skull, he returned to the pediatric ICU to recover and instead went downhill fast. A day after the operation, following a seizure, doctors hooked the baby to a respirator. Blood began pouring out of a tube placed down his throat. He arrested but was revived. The next night Paul began oozing again; he arrested and died at 8:30 P.M. Lab tests showed his bleeding was caused by problems with his clotting mechanism.


Twice, doctors discovered patients’ respirators improperly set. At 11 P.M. one night, two-year-old Rosemary Vega, recovering from a routine heart operation, suffered a seizure and became sluggish after being placed on a respirator. At 2:15 A.M., a surgery resident noticed that Rosemary’s breathing machine was feeding her too little oxygen. “… Ventilator setting had been altered by unknown source …” one physician noted. Rosemary died at 7:52 P.M. that day.

Four-month-old Placida Ybarra had entered the ICU for treatment of heart failure. At 7:20 P.M. on the day of her admission, it was discovered that her respirator was pouring out 100 percent oxygen—a dangerously rich concentration, which can throw the blood chemistry out of balance. On her fifth day in the hospital, Placida unexpectedly went limp, and her heartbeat began to race; she died at 10:25 P.M.

Too many babies were dying in the ICU—dying of problems that shouldn’t have been fatal, problems that patients had been able to lick in the past. Other kids would recover—but only after experiencing unexpected problems. Doctors covering the pediatric ICU were accustomed to handling three or four resuscitations a month. There were nine CPRs in August 1981, thirteen in September. The residents wondered what was happening.

The frantic search for answers began with explanations that were benign. Was there some mysterious germ in the air? A San Antonio strain of Legionnaires’ disease? Perhaps a new type of meningitis? Doctors wondered if the ICU’s medical equipment had become contaminated. Or was it just a run of bad luck? As the emergencies became more frequent, a less innocent pattern emerged. The children were dying during a single nursing shift—the 3–11 evening shift. And they were dying under the care of a single nurse. They were dying on Genene.

One child arrested on three consecutive days—in each case on the 3–11 shift, in each case on Genene. “I’d leave a patient I thought was stable,” said Toni Grosshaupt, an RN. “She’d come on, and I’d find out the patient had a bad spell—had seizures or codes. That happened consistently. It just got to the point where I hated to come back the next day.”

As codes and death became more common, a job that was naturally difficult became almost unbearable. The unit was already short-staffed; everyone was working extra. Concerned about the growing pressure, Dr. Robotham had arranged for a psychiatrist to visit regularly with the staff in the ICU. Genene’s predictions of medical catastrophe were becoming eerily accurate. When the LVN announced during report that a baby would die, other nurses set up emergency medications at the patient’s bedside in anticipation of the arrest.

The burden was greatest on those who worked with Genene on the 3–11 shift, where all the emergencies were taking place. On one particularly dark night, they had two codes going at once; the doctors and nurses stabilized the first baby, moved to the second child, who died, then had to return to the first patient, who was suffering a second arrest, which would prove fatal. “It was getting too stressful,” said Judy Cacciola. “I was depressed a lot of the time. It was just very frustrating to go in, work our tails off, and have all those kids dying around us. After a while, the codes almost became a joke. I had to get out of there.” Cacciola quit in September, after nine months in the ICU.

Genene herself seemed devastated by the rash of deaths and near deaths. “They’re going to start thinking I’m the Death Nurse because I’m always taking these babies downstairs,” she told one resident. In September, another of her patients died, and Genene fell into a chair in a corner of the unit and broke into tears. A young female doctor walked over to comfort her, and Genene looked up, her eyes red and puffy. “Why do babies always die when I’m around?” she asked.

Many who worked in the pediatric ICU at Bexar County Hospital were asking the same question. Around cafeteria tables and in hallways, a growing number of people who suspected something was terribly wrong began calling Genene’s hours on duty the Death Shift.